Updated May 08, 2020
Editor's rating 4.5
User's rating 5.0
With the impending release of the Chevrolet Corvette 2020, let's take a deep dive into what this brilliant American made super is like spec-wise!

Like the hamburger and the Californian Pacific Coast Highway, the most quintessentially American of all supercars since time in memoriam is the Corvette. Well sure there are cars like the Challenger but that’s a muscle car, there’s the Viper but that’s canceled and driving one as a hoon will most definitely kill you, and the SSC Aero and the Hennessey Venom GT but those two are obscure and we aren’t getting those models here in the Philippines.

So yes, if one hears the words “American made supercar,” the Corvette will most definitely immediately pop up in your mind’s eye.

Now, why is that?

Well for one thing, the Corvette is Chevrolet’s halo vehicle for a very long time now. Just for how long? Well, the first Corvette came out swinging way back in 1953. And yet even after so many years and after seven generations, this model is still very desirable and of course, it’s now up to par with some those European made exotics when it comes to performance. There’s also the fact that it might be the most accessible V8 coupe with that kind of performance and handling currently available today. This is most especially true for the Americans who value much their home grown products, most especially cars. In turn, the Chevrolet made sports car also became synonymous with American “freedom,” identity and the notion of “living the dream.” So yeah, it’s no wonder it became so popular.

On another note, at least for car enthusiasts, the Corvette is either a certifiable engineering marvel or a massive turning point in the car’s long career. It symbolizes the potential of what Chevrolet and what American car companies in general can do and specifically, what the brilliant LS engine can do. And in speaking about that potential, Chevrolet might indeed have outdone themselves this time…

As you might already know, the new Corvette Stingray C8 2020 is officially released this year. And while it isn’t available here in the Philippines, this might be the best version of the aforementioned sports car that the Yanks ever made.

For now, keep calm and take a look at the Chevrolet Corvette Stingray C8 2020 Review of the US-Spec version before it officially hits the Philippines stores. When it comes to the 2020 Chevrolet Corvette exterior, there is no doubt that something is really different. For one thing, it looks more like those supercars built by the Europeans with their ready to pounce, athletic designs.

This is due to one main thing about the new 2020 Corvette; it’s no longer a front-engined vehicle. Instead, its engine, as with many other supercars since the Lamborghini Miura, now have it positioned in the middle. Now because of this change in layout, the 2020 Chevrolet Corvette’s hood length is shorter and its cab-rearward design is now gone. The 2020 Corvette reminds us of a big cat that's ready to pounce. Rawr.

While indeed that new Corvette looks as stunning as any Euro-spec exotic supercar, there are still design elements that are typical of the American brand. Take for example the lower part of the front fascia and the headlights which if you’re familiar with the Chevrolet Corvette models, is a clear amalgamation or rather an evolution of those previous designs.

Regardless of that though, the 2020 C8 Corvette is the first-ever American made mid-engine Supercar which of course explains the hype behind this vehicle.

As you move on rearwards, the new Corvette’s rear window and the distance between the rear tips of the doors until towards the rearmost portion of the car is now longer. This is due to the position of the engine which can be seen slightly from the rear window, sitting behind the cabin.

From the sides, there also this huge functional air intake.  The rear lights and lower rear bumper are also quintessentially Chevrolet Corvette in that they’re similar to the old model and yes, the roof is still removable. Yay. 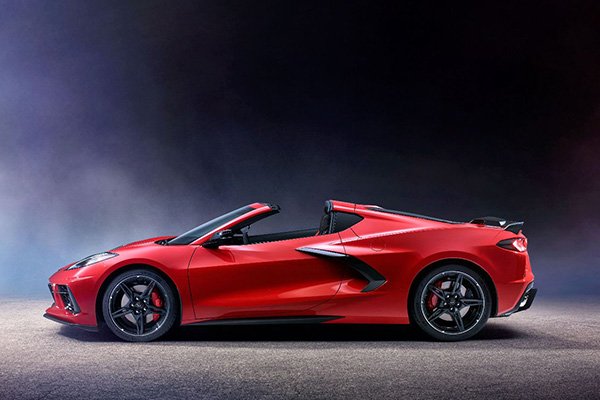 The 2020 Corvette lets you air out your hair while doing a burnout. Awesome.

Apart from styling though, this mid-engined “spyder” design of the C8 also means that the weight distribution is now better. The better weight distribution, of course, means better handling. And now, there’s also added storage space located in the front and a smaller one located at the back just behind the engine. 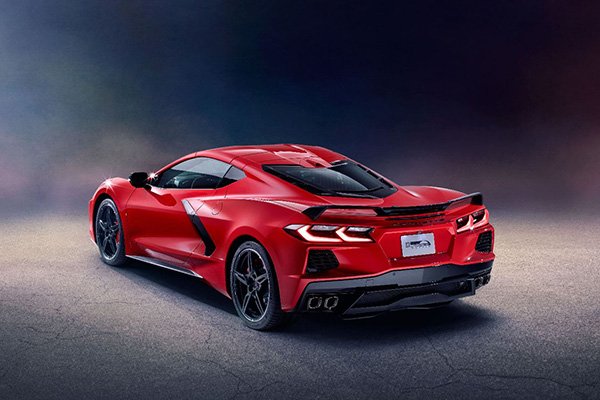 And yes, all those vents you see on the 2020 Chevrolet Corvette are functional. No fake vents here folks!

>>> Car comparison of other sports cars in the market: [Auto Brawl 101] Toyota 86 vs Subaru BRZ: Who's the King of Speed?

If we have to describe the 2020 Chevrolet Corvette interior in one word, we’d say that it’s a cockpit.

Now Chevrolet wanted to do several things with regards to the interior; they wanted a very driver-focused feel to it and they did that by adding more visibility, a square-shaped steering wheel similar to the ones found on F1 cars to let you see the gauge, and lastly the controls are now optimized to be in easy reach to the driver. 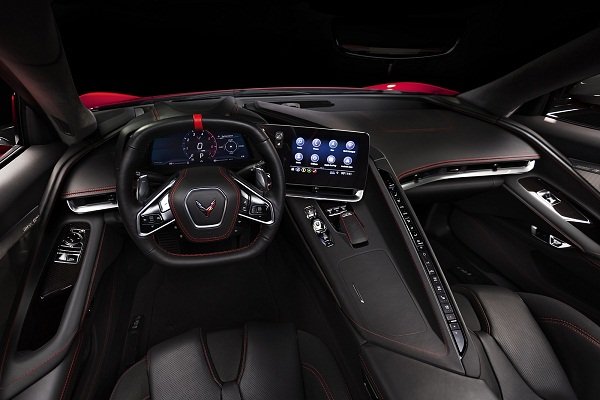 Even the touchscreen is now seemingly fused together with the digital gauge cluster and everything else like the strip of controls found in the middle of the “cockpit” is slightly tilted towards the driver.

When it comes to onboard infotainment systems, sure there are the usual phone connectivity stuff but the one big thing with the new Corvette’s touchscreen is it has this performance data recorder. This brilliant addition records interesting stuff like lap times, g-forces, and all things related to going fast on a race track. The adjustable bucket seats inside the new Chevy Corvette 2020

As for the build quality itself, it’s pretty up there when it comes to being posh despite being a purpose-built machine designed to get that lowest track time possible. The bucket seats are electronically adjustable and there’s accented stitching everywhere.

There’s one thing missing from the new Corvette though…

>>> Kindly refer to our daily-updated cars for sale section for more affordable options.

While the 6.2-liter LT2 V8 is still the same, it’s now mounted on the back and it now makes 495 horsepower and 630 nm which is tremendous for a car of its size and weight. But the one thing a lot of people are concerned with is the lack of a manual transmission version which is, of course, a first in this marque’s long and colorful history.

Instead, it now has this eight-speed dual-clutch automatic that can be controlled either by those beefy looking paddle shifters mounted on the steering wheel or on a button mounted on the center console.

While a great many are crying foul over this, mechanically there’s nothing wrong with the transmission on the new Chevrolet Corvette 2020. It reportedly sends power neatly and thoroughly towards the rear and it can even provide the car a 0 to 100 km/h time of 3.0 seconds with the Z51 performance package equipped. So yeah, the Corvette indeed not only became visually alike with the Euro-spec supercars, it also ditched a manual tranny just like those models did some time ago. The new Corvette is still powered by an LS-based engine

>>> Also check out: No manual variant for the Chevrolet Corvette C8 Stingray 2020!

Now on a more optimistic note, the new 2020 Chevrolet Corvette now handles better due to being more rigid than the previous model. This is thanks hugely to the chassis which has this center tunnel that functions like a backbone and the strong aluminum parts they used for the frame. Also being a mid-engined car helps because of the better weight distribution it provides.

Aside from its very heroic handling and very tight styling, the 2020 Chevrolet Corvette is also a pretty safe vehicle. It comes with a lot of active safety features which most definitely will enable any kind of driver to turn the car into a functional daily driver.

It comes with a reversing camera with a short-range radar which warns you of obstructions, a blindside zone alert which also uses radar, a front curb view camera because you don’t want the lower front end of your beloved sports car to be mangled by infrastructure, and also, a rearview mirror which turns to a rear-camera display with a simple push of a button. Here's a picture of that horrid circumstance. The driver came out unscathed

Now while it isn’t even released yet, someone has already managed to crash the 2020 Corvette test unit. Que the cringing car guys right here.

Well from what we can make out of the incident, the dual front and dual side airbags, as well as the seatbelt pre-tensioners, did their jobs well as no one was hurt during the crash.

Now one of the most mind-bending facts when it comes to the new Corvette is the price. As to how Chevrolet manages to do this as a business, as far as we know, it all boils down to economy of scale. Chevrolet is a large company after all and they’re planning to stretch out the C8 model line into other platforms into the future.

Now based on those converted prices alone and not counting tax, the 2020 Chevrolet Corvette’s base trim level is worth as much as a 2020 Lexus IS here in the Philippines. Now, this pricing is based on US pre-release prices so it doesn’t count taxes and whatnot.

Regardless, 3LT trim of the 2020 Corvette is already miles cheaper than the existing 2019 Chevrolet Corvette Stingray 3LT that’s already available now in the Philippines. So yeah, it is pretty safe to say that a lot of Filipinos are clamoring for a more affordable Corvette sports car but then again, taxes do hit pretty hard when it comes to American Imports.

While a lot of long-time Chevrolet Corvette fans are understandably upset with the massive changes the company gave the new C8 Corvette, it still stands that the model is a marvel of American engineering and it will have a great potential in becoming a hit.

With only a few days away until its October 2, 2019 release date, we're really excited for more details about this sports car and whether or not it will indeed come here to the country. So for more updates on the all-new 2020 Chevrolet Corvette, keep yourself posted on Philkotse.com because we’ll be watching this one like a hawk. 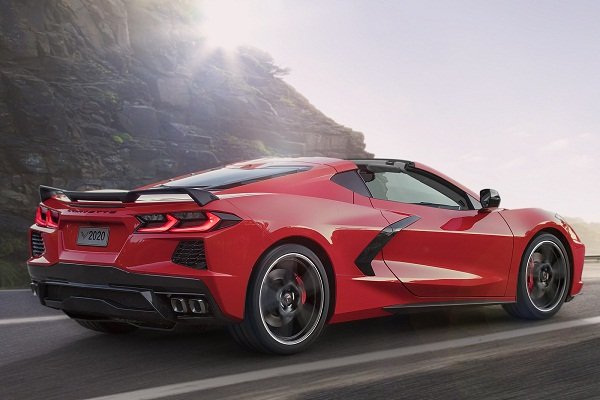