Note however that these prices that we’ve listed on our website might be subject to change and therefore should be used for your reference only. For more accurate prices, please refer to our Mitsubishi Pajero for sale section.

I. Mitsubishi Pajero price in the Philippines - 2020

The Mitsubishi Pajero is still on its fourth generation introduced back in 2006, yet is known to be very prodigious as an off-road machine. The Pajero's heritage was solidified thanks to the legendary performance of its third generation-based "King of the Desert" rally car in the grueling Dakkar rally from 2001 to 2005. The current Pajero's design is more than a decade old. We're not complaining, though

Currently, the Mitsubishi Pajero 2020 still gets plenty of love from enthusiasts in the Philippines and certain markets such as Australia for its simplicity and staying power, in the sense that not much has changed on the current platform since its release.

More mainstream consumers, though, have noted its lack of refinement, particularly those concerned with new safety features such as driver-assistive tech. The Pajero as it stands offers the bare minimum that many hardcore off-roaders look for, such as stability control, traction control, antilock brakes with electronic brake distribution and six airbags. 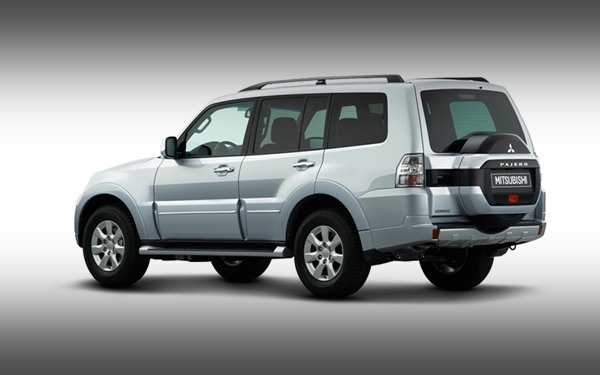 Still rugged enough to mount the spare tire on its rear

In terms of styling though, the design is getting a bit long in the tooth. As we’ve said earlier, the exterior design and the overall shape of the vehicle haven’t changed since 2006, yet it’s still a handsome-looking SUV that has character. While modern amenities are lacking, the cockpit is well-arranged and the controls are easy to understand

Inside, it’s also pretty basic. The touch screen interface has Bluetooth, USB, and AUX, a DVD player, a radio tuner, and six speakers. The Pajero also gets an onboard tire pressure monitor, automatic climate control, and leather upholstery.

Legroom and headroom is abundant inside the Mitsubishi Pajero

Under the hood, the Pajero is still powered by the 4M41 3.2L Di-D inline-4 turbo diesel, good for 189 horsepower and 441 Nm of torque and sending power to the drive wheels through Mitsubishi's Super Select II 4WD system.

III. Why would you want to buy a 2020 Mitsubishi Pajero?

While many people point out the Pajero's aging design and relatively basic features, there’s still a market for such a vehicle on our shores, and especially in Australia where the Pajero is still a huge hit.

Many car enthusiasts are resistant to change, more so offroad enthusiasts who are always willing to forego creature comforts in exchange for ruggedness and capability. After all, if it ain't broke, why fix it?

Under the Metal of the Mitsubishi Pajero

The Pajero's platform is also built on a tried and tested platform, having endured countless hours in Dakkar races and winning numerous podium finishes. The durability exhibited by the Pajero in some of the most extreme operating conditions imaginable carried benefits that have trickled down to more mundane applications such as towing cargo and traveling on provincial roads.

On the flip side, the Pajero's raw, utilitarian nature is generally viewed as being behind with the times. It sorely lacks driver-assist functions (although it still offers active stability and traction control), and the look hasn’t changed since 2006.

6 SRS airbags are equipped in the Pajero Despite its simplicity, the Pajero is still great as a daily driver and the occasional romp over dirt roads Mitsubishi has a significant presence here in the Philippines Aside from Mitsubishi, you can also browse on Philkotse.com thousands of daily-updated car listings for a wide variety of other car brands. To avail the latest car promotions offered by all car dealerships available in the Philippines please refer to our Cars for sale section.