With thousands of Ford for sale at the cheapest prices updated daily by certified owners and dealers on Philkotse.com, your next ride might be just a few clicks away.

Check out the latest Ford cars Philippines price list this June 2020, including updated prices for Ford's best-selling models such as the Ford EcoSport, Ford Mustang, Ford Focus, Ford Fiesta, and Ford Explorer. In-depth reviews of these models and other Ford cars in the Philippines can be found in our Ford review section.

Please note that the following car price list and promos from Ford are updated regularly, so please bookmark this page to catch up with the latest automotive deals.

Please note that these are prices listed in some showrooms and should serve as reference only. For more accurate pricing information, please refer to the Cars For Sale section.

To our eyes, the Ford EcoSport is the best companion on the road less traveled. Carrying the shape of a baby crossover SUV, the EcoSport extremely impresses us with its sleek and modern look which hides a rugged performance as well as full qualities of an entry-level off-roader. 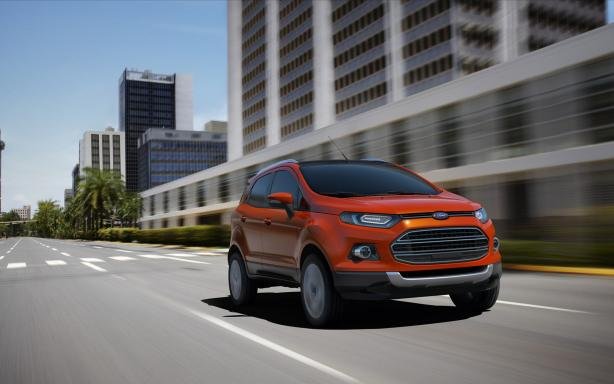 To our eyes, the Ford EcoSport June be the best companion on the road less traveled

The new EcoSport looks nice and sporty with a boxy shape, high ground clearance, sculpted sides, under-chassis skid plates and an iconic spare tire at the rear-end. The interior, in the meantime, is a 5-seater cabin which is roomy enough to keep your family relaxed during long trips owning to leather seats, electronic air temperature control, 4 – 6 speakers addition to a number of safety features like ABS, airbags and ISOFIX child seat fixings.

Under the bonnet is a 1.5-liter 4-cylinder Ti-VCT petrol engine which is capable of making 108 hp and 142 Nm. Power is fed to the front wheels via either a 6-speed PowerShift automatic gearbox or a 5-speed manual.

Due to the new excise taxes, all EcoSport models are more expensive. The range-topping model now comes in at P1,058,000. Plus, we offer a wider selection of affordable Ford EcoSport for sale on the site. Make sure to check it out.

The Ford Everest is a perfect combination of stylish design, premium cabin, up-to-date technologies and equal on- and off-road capability.

The outside is adorned with an athletic front fascia featuring an inverted trapezoid front grille framed by new headlights with LED daytime running lights. Stepping inside, the new Everest is surprisingly spacious with more room offered to each occupant along with a generous cargo space of up to 2,010 liter with folded second- and third-row seats. Besides, the SUV comes exclusively with latest Ford’s SYNC in-car connectivity.

Billed as one of the toughest SUV in the segment, there is nothing to complain about the Ford Everest - a body-on-frame SUV. Frankly speaking, it’s an excellent off-roader on the toughest terrains thanks to the rigid chassis and a high ground clearance of 225 mm. Billed as one of the toughest SUV in the segment, there is nothing to complain about this body-on-frame SUV

In addition, the all-new Everest is available in two engine options: a 160 hp/385 Nm 2.2L Duratorq 4-cylinder TDCi engine and a 200 hp/470 Nm 3.2 L Duratorq 5-cylinder unit, both of them are paired with either a 6-speed manual or automatic gearbox. These engines promise to offer a more impressive performance.

Of course, such a tough workhorse won't come with a low price tag.The new price range of the Ford Everest is now from P1,995,000 to P2,299,000. To keep you updated with how much an Everest will cost you, here is our daily updated list of all Ford Everest for sale by reliable sellers in the Philippines.

With the all-new sixth-gen Ford Mustang, Ford actually gets fans bewildered. The “pony” has now grown up with a sleeker, bigger body and surely, a greater performance. However, worth noting here is a completely-independent rear suspension that remarkably enhances the car’s already-good performance. As well as that, remaining the 5.0L engine but the new Mustang’s receives with bigger valves, camshafts, new cylinder head, camshafts, forged con rods and a rebalanced forged crankshaft as well. Thanks to such those excellent enhancements, the Mustang is able to crank out 435 hp and 542 Nm of peak torque, 5% more powerful than the previous pony.

As for lower-end variant, the V6 has disappeared to make room for the 2.3L 4-cylinder EcoBoost engine which is set to deliver 434 Nm and 310 hp. In the Philippines, the Ford Mustang solely comes with automatic transmission option.

Under the new excise taxes, the Mustang experiences drastic change in price. In detail, both the 2.3 EcoBoost Preminum and 5.0 V8 GT Preminum variants are at P2,798,000 and P3,478,000 respectively. 2020 also welcomes the addition of two topless Mustang variants priced at P3,578,000 for the MT model and P3,678,000 for the AT counterpart. Check out the prices of lower trims and second-hand Ford Mustang models.

We’re living in a new era of SUVs but the battle of compact sedans has yet to end. And one of the potential winners in that battle is the Ford Focus sedan, which focuses not only on appearance but also on users’ comfort and performance. 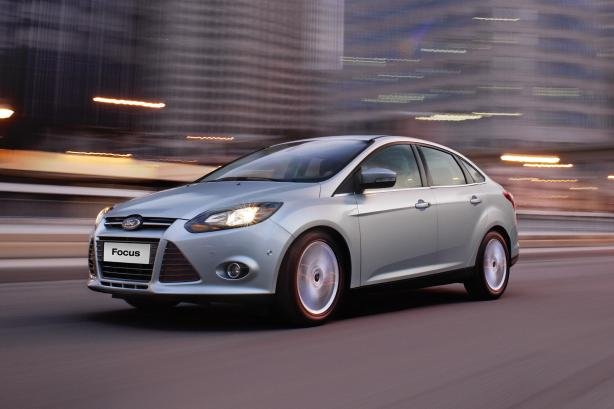 Point by point, the saloon is pampered with a better look: a trapezoidal grille, LED daytime running lights, new fog lamps and sharper hood façade. The inside, on the other hand, is really neat and modern with intuitive controls and a handful of entertainment devices.

The Focus employs a 1.5L EcoBoost GTDi engine cranking out 180 hp and 240 Nm, where power and fuel efficiency mingle together.

Having gone through 19 years and three generations, the Ford Focus hatchback has left a very good impression on Pinoy drivers’ heart. Let alone a good-looking hatchback, the Focus also plays a role of a performance hatch with a large number of best-ever qualities seen on the sedan version. Good news for Focus' future buyers: There is no change in price for the entire range, both sedan and hatchback model. This means the base variant of both body types can be yours at the same price tag of P1,088,000.

The Ford Explorer has gone a plethora of upgrades since its first launched in 1990. Most recently, and also most strikingly, the Explorer has received an all-new platform which turns it from a mid-size into a full-size crossover SUV. As a result, the car will definitely lead you to expect in every amazing trip. 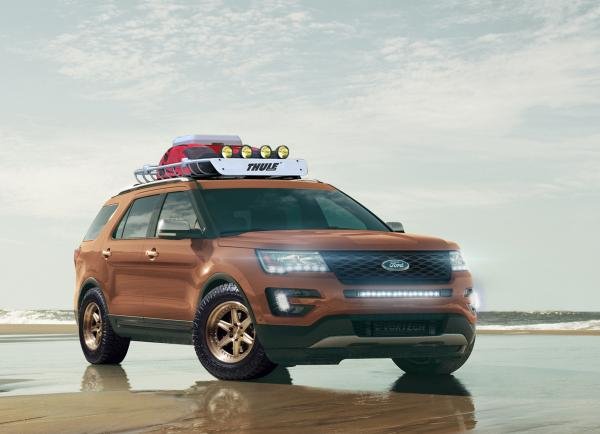 For the most part, the Explorer is hefty and muscular on the outside with new front, head- and fog lamps along with taillights. The overall body dimension of the Explorer is considered as one of the biggest in its segment. For this reason, the inside is so commodious that it can cater up to 7 passengers and can keep them entertained with up-to-the-minute entertainment equipment.

Propelling the Ford Explorer is a 2.3L and 3.5 EcoBoost engines, both of them work in companionship with a 6-speed automatic transmission. Safety features comprise Hands-Free Liftgate, Front Park Assist and others.

According to latest announcement from Ford, price for the base Explorer stands at P2,748,000, while the top-spec model's price reaches to P3,118,000. If that's a stiff price for you, more affordable choices can be found on this complete list of Ford Explorer for sale at good prices.

Similar to the Focus, the Ford Fiesta is available in two body types: sedan and hatchback.

Decked with a glossy and massive front grille bordered by swept-back headlamps in line with prominent curves, the Ford Fiesta, to be frank, gets a menacing look. As a fun comparison, it seems that the Fiesta is threatening all of its rivals with its opened mouth. But this threat is logical as the Fiesta is one of the most favorite rides in our shores today. 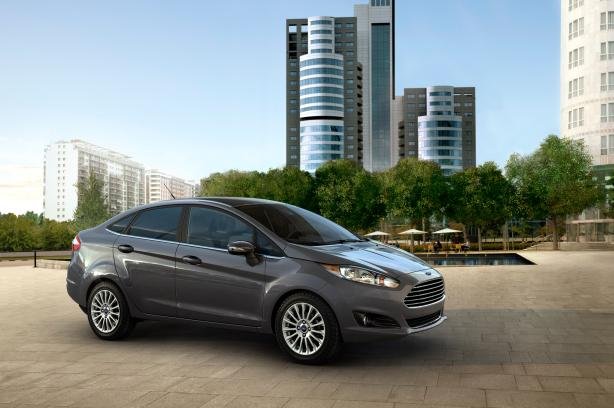 The Fiesta interior is replete with automatic climate control, CD/MP3 player, SYNC, voice control, Bluetooth, USB connectivity and many other standard details. Furthermore, this baby sedan will keep you and your family safe at all times with the airbags system, ABS with EBD, keyless entry, immobilizer, and ISOFIX.

Underneath the sheet metal is a 1.5L engine with 112 hp and 140 Nm of peak torque, paired with either a 6-speed automatic transmission or a 5-speed manual. To purchase a Ford Fiesta sedan in the Philippines, you need to prepare at least P755,000 for the base version.

In the shape of a hot hatch, the Fiesta is still alluring, not to mention a functional cabin with a bevy of latest features. Being petite but the hatch can fit 5 people in the premium cabin screened by leather trim. The rest of the car remains the same as the sedan version. 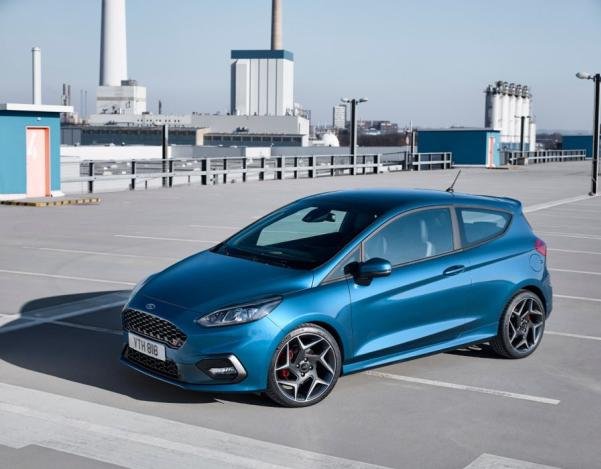 Being petite but the Ford Fiesta can fit 5 people

In the Philippines, the Ford Fiesta hatchback is motivated by a 1.0L EcoBoost and a 1.5L gasoline engines and shares the similar transmission options with the sedan. Hence, it offers ample performance when compared to other hatchbacks besides great handling and agility.

Broadly, perfect for city driving and worth money are the best adjectives to depict the Fiesta.

Well-deserved the title of one of the most affordable city cars in our country, even though almost every Ford model is priced higher due to new excise taxes. This city car can be had from as low as P755,000 for the base variant of both body types.

>>> Also check out: Monthly-updated price lists of all car brands in the Philippines