Isuzu Philippines Corporation (IPC) is staying strong in the local market despite having two passenger vehicles only for 2022. These Isuzu models include the Isuzu D-Max and Isuzu mu-X, with the Isuzu Traviz as the light commercial vehicle entry. The cheapest Isuzu in the Philippines is the Isuzu D-Max which starts at Php 857,000 for the RZ4E 4x2 Single Cab MT variant. Meanwhile, the most expensive Isuzu vehicle in the local lineup is the Isuzu mu-X with a starting price of Php 1,590,000 for the RZ4E 4x2 LS AT. The current lineup consists of one pickup truck and one midsize SUV which are the D-Max and mu-X, respectively.

In addition to the monthly updated Isuzu car price list, Philkotse.com always ensures that it is the address that provides all the best promotions from all dealers in the Philippines along with the prepaid and paid programs, and the lowest monthly contribution that car buyers cannot ignore.

Check out Philkotse.com to know more about Isuzu models, the latest price list, as well as the latest news, reviews, updated specs, and other information on the website.

The most popular and top-selling Isuzu cars in the Philippines are the Isuzu D-Max and Isuzu mu-X. To get into the Japanese car brand, the price starts at Php 857,000 and goes up to Php 2,450,000 this 2022. Currently, Isuzu Philippines offers three types of models, which you can find on the full list of Isuzu car prices in the table below.

Isuzu is a Tokyo-based car company and has been one of the world's most trusted car brands for almost a century. It provides the most reliable commercial vehicles. This car brand is also the quintessential symbol of innovation and diesel engine technology of the current generation.

In 1916, Isuzu Motors Ltd. was established in Tokyo, Japan, and started as a shipbuilding company under the name Tokyo Ishikawajima Shipbuilding and Engineering Co. Ltd. The company then ventured on producing automobiles in partnership with the Tokyo Gas and Electric Industrial Co.

The company has been through many decades and many merger events before they became the Isuzu Motors Ltd. we know today. It includes merging with DAT Automotive Manufacturing Inc during the 1930s and General Motors in the 1970s.

Isuzu specializes in producing, designing, and selling light to heavy-duty trucks, busses, and diesel engines for commercial and passenger vehicles, which are utilized in their cars and other vehicles manufactured by other automakers. They then ventured into producing and selling sport utility vehicles.

Presently, Isuzu Motors Ltd. has global distributors. Explicitly speaking, 33 countries in North, South, and Central Americas, 12 countries in Oceania and the Pacific Ocean, 11 countries in the Middle East, 28 countries in Africa, and 19 countries in Asia, including Isuzu Philippines.

The research and development facilities and manufacturing plant of Isuzu Motors Ltd. can be found in various countries. In Japan, the company has three that produce both vehicles and engines. Isuzu also has assembly and manufacturing plants in Indonesia, the USA, India, Thailand, and the Philippines. Their research and development centers have facilities in the USA, Germany, and Japan.

Isuzu's Philippine ventures started in the 1950s. Since then, it is known as one of the nation's iconic industrial and commercial vehicle providers.

On August 7, 1995, the company was rebranded as the Isuzu Philippines Corporation (IPC) through the joined forces of Rizal Commercial Banking Corporation, Ayala Corporation, Mitsubishi Corporation, and Isuzu Motors Ltd. The four-way merger led to the development of the 13-hectare facility located in Binan, Laguna. The said facility produces 15,000 units annually.

In the Philippines, Isuzu cars are very evident on the local roads. Not only their trucks but their passenger vehicles as well. The brand also retains its place in the top ten list of highest-selling vehicles in the country.

You can visit Philkotse.com to know more about Isuzu Philippines' models, available promos, as well as the latest news, reviews, updaters specs, and other information on the website.

3. Isuzu In The Philippines: Dealership network and Promos

Isuzu Philippines has an extensive dealership network of 49 facilities in the country. You could find the detailed list in Philkotse's page of Isuzu Dealerships. In addition, Isuzu Brand offers various promos, check the full list of Isuzu Promos here.

The Isuzu D-Max 2022 is a 5-seater pickup truck that is available in six variants, including various options for a 4x2 or 4x4 drivetrain. Isuzu Philippines Corporation (IPC) is offering this truck at a price that ranges from Php 862,000 to Php 1,835,000. There are two engine options powering the D-Max. One is a 1.9-liter RZ4E-TC inline-4 turbodiesel engine that makes 148 horsepower and 350 Nm of torque, while the other is a 3.0-liter 4JJ3-TCX inline-4 turbodiesel engine that delivers 187 horsepower and 450 Nm of torque. Either a 6-speed manual or 6-speed automatic transmission can be paired to the said ...

The Isuzu mu-X Philippines 2022 is the Japanese marque's entry to the 7-seater midsize SUV, which is based on its pickup truck sibling, the Isuzu D-Max. It is offered in five variants with a price that ranges from Php 1,590,000 to Php 2,450,000. For the Philippines market, the Isuzu-made SUV has two available engine options. The smaller one is a 1.9-liter RZ4E Bluepower turbodiesel capable of making up to 148 horsepower and 350 Nm of torque. It can either come with a six-speed manual transmission, or a six-speed automatic transmission. Meanwhile, the larger engine option for the mu-X is a 3.0-liter ...

The Isuzu Traviz 2022 is a light-duty commercial vehicle that is available in the Philippines with a price that ranges between Php 962,000 and Php 992,000. This price range spans within the model's two variants, namely the base S (short wheelbase) and top-spec L (long wheelbase). Under the hood, this commercial vehicle is powered by a 2.5-liter 4JA1 Direct Injection Common Rail (CRDI) Blue Power diesel engine capable of making 77 hp and 176 Nm of torque. It uses a 5-speed manual transmission as standard. When it comes to the dimensions, the Traviz is 4,600 mm long (4,450 mm for Traviz ...

Is the Isuzu Crosswind available in the Philippines?

The Isuzu Crosswind had been brought to the local market since 2001 but already phased out since 2018 because this AUV couldn’t comply with Euro-IV emission standards.

Is there any replacement for the Crosswind?

At this point, no one can answer that. According to Isuzu Philippines Corporation’s executives, if ever the Crosswind emerges, it might not be in the form of an AUV, but rather as Isuzu's interpretation of a modern jeepney.

How many Isuzu dealerships are there in the Philippines?

As of 2020, Isuzu Philippines has 47 dealerships across the country.

The Philippine-spec Mu-X is available in multiple variants so which variant should I buy?

If you are planning to get a large passenger car, go for the top-spec 3.0L LS-A 4x4 AT variant which is the only option that comes with features like a traction control system, hill start assist, hill descent control, and terrain commands select dial. If you are on a budget, the base MT variant is still a good variant to start with. Its power output is still close to the higher variants, while you can still save more than half a million pesos. 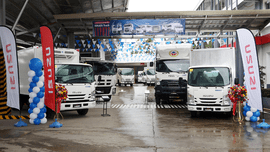 CVs such as the Traviz and Isuzu trucks graced the event. 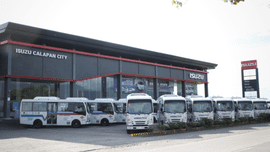 The automaker is moving one step closer to a more sustainable future. 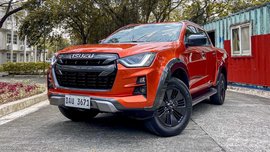 Isuzu PH and AAP went on a five-day road trip. 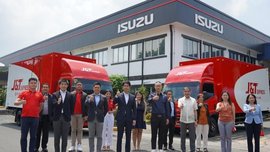 Over hundreds of trucks were ordered. 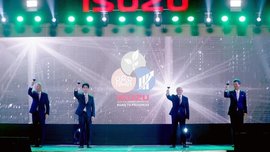 Isuzu commemorates 25 years of operations in the Philippines

The company wants to reduce its carbon footprint moving forward.