Besides the Mercedes-Benz Price 2023 price list we update regularly, Philkotse.com also lists down the hottest car promos from all dealerships nationwide. These include enticing deals like low monthly amortizations, low downpayments, and cash discounts.

In the Philippines, the most expensive Mercedes-Benz model is the S-Class, which comes with a starting price of Php 17.8 million. The most affordable model meanwhile is the A-Class which has a price range of Php 2,490,000 - Php 3,290,000. See the table below for the Mercedes-Benz car price list for 2023.

Mercedes-Benz is an internationally acclaimed brand that has been a key player in the premium automotive market.

The German company is founded by Karl Benz dating back to the late 19th century. He built the first gasoline-powered vehicle which was called the Benz Patent-Motorwagen.

After a few engineering improvements, Benz and his team set-up production of the Mercedes which was released in 1901. In 1926, Mercedes-Benz was officially instituted.

To this day, the brand is known to carry some of the finest nameplates in the global automotive industry. It is currently one of the largest manufacturers of luxury passenger vehicles in the world, which sold nearly 2.4 million cars in 2019.

Mercedes-Benz Philippines is also a multi-awarded brand in the automotive and advertising industries.

Mercedes-Benz entered the Philippine seas through the Auto Nation Group, Inc. (ANG) in 1993. ANG is founded by Felix R. Ang who established CATS which was originally a source of genuine car parts and premium vehicle services.

CATS soon diversified to specialize in handling Mercedes-Benz vehicles and in 1991 it was appointed as the brand’s authorized workshop in the Philippines. A couple of years after, CATS Motors, Inc. became the official Mercedes-Benz dealer in the country.

In 2012, the CATS Group and Mercedes-Benz celebrated 20 years of partnership which further reinforced the brand’s presence in the Philippine market.

Mercedes-Benz Philippines currently has a list of 13 models. For more details on their variants and respective prices, see the list below.

It has multiple dealerships in central locations in Metro Manila and Cebu. Some of its biggest branches can be found in Bonifacio Global City, Alabang, and EDSA Greenhills, housing its expanded showroom and service center.

The Mercedes-Benz A-Class is a subcompact executive car positioned as the German automaker's entry-level vehicle. It is available in the Philippines in one variant priced at Php 3,090,000, with two AMG models for those who want a more spirited driving experience. Powering this vehicle is a 1.3-liter inline-4 gasoline engine good for 136 horsepower and 200 Nm of torque. A 7G-DCT (7-speed dual-clutch transmission) is paired with the engine to send power to the front wheels.

The Mercedes-Benz C-Class 2023 is a compact executive car that has been around in the German marque's lineup since 1993. Mercedes-Benz Philippines introduced the fifth-generation C-Class on August 2022. Pricing then starts at Php 3.89 million.

Under the hood, this luxury sedan uses a 1.5-liter 4-cylinder gasoline four-cylinder engine that can produce up to 170 horsepower and 250 Nm of torque. The said engine then works in-tandem with an electronic motor powered by a 48-volt power supply. A 9G-Tronic (9-speed automatic) transmission is used to send power to the rear wheels.

Dimensions-wise, the C-Class is 4,751 mm long, 2,033 mm wide, and 1,440 mm high. In the local market, this German compact executive car competes against the likes of the BMW 3 Series and Lexus IS.

Under the hood, the Philippine-spec CLA-Class uses a 1.3-liter turbocharged inline-4 gasoline engine that can make up to 208 horsepower and 350 Nm of torque. Power is then sent to all four wheels through a seven-speed dual clutch gearbox.

Locally, the Mercedes-Benz CLA-Class primarily competes against the BMW 3 Series 318i Sport as both of them are executive subcompact sedans.

Under the hood of the E-Class is a 2.0-liter turbocharged inline-4 gasoline engine. At the most, this four-banger can produce up to 197 horsepower and 320 Nm of torque. Power is then sent to its rear wheels through a nine-speed automatic gearbox with paddle shifters.

In the local market, the Mercedes-Benz E-Class competes against the likes of the BMW 5 Series, the Audi A6, Jaguar XF, the Lexus ES, among others.

Both G-Wagon variants use a nine-speed automatic gearbox, and both come standard with all-wheel-drive.

Locally, the Mercedes-Benz G-Wagon competes against the likes of the Lexus LX, Land Rover Defender, and the Toyota Land Cruiser.

Under the hood of the Philippine-spec GLA-Class is a 1.3-liter inline-4 gasoline engine, which can make up to 163 horsepower and 250 Nm of torque. Power is then sent to its front wheels through a seven-speed dual-clutch gearbox.

Locally, the 2023 Mercedes-Benz GLA’s closest competitors is the BMW X1, Lexus UX, Audi Q3, among others.

The 2023 Mercedes Benz GLB is the newest member of the German brand’s SUV lineup. It is the luxury automaker’s first 7-seater compact sports utility vehicle that was recently introduced as their entry into the highly competitive segment. Through its wideness, generous interior space, shorter wheelbase, and complete technological features, the GLB has been dubbed as the “most versatile compact SUV” in its class. Powered by a 1.3-liter Turbocharged gasoline engine with a dynamic select system, the model can easily be brought from the city’s busiest streets to the speed up at open highways. Offered locally is the Mercedes Benz GLB 200 AMG Line variant that is equipped with the latest MBUX system hooked to Apple CarPlay and Android Auto.

The Mercedes-Benz GLC-Class 2023 is a 5-seater compact luxury crossover that sits on a similar platform as the brand's flagship model, the Mercedes-Benz S-Class. It is available in the Philippines in one variant which is priced at Php 4,390,000. Powering the vehicle is a 2.0-liter inline-4 gasoline engine that makes 197 horsepower and 320 Nm of torque, with a 9G-TRONIC (9-speed automatic transmission) as the sole gearbox option.

The Mercedes-Benz GLE-class 2023 is a midsize luxury crossover. For the Philippines, the GLE 300d 4MATIC has a five-seater variant, as well as a seven-seater variant.

Powering the Philippine-spec GLE-Class is a 1.9-liter inline-4 engine capable of making up to 242 horsepower and 500 Nm of torque. Power is then sent to all four wheels via a nine-speed automatic gearbox.

Locally, the Mercedes-Benz GLE-Class competes against the Lexus RX, BMW X5, Volvo XC90, among others.

The Mercedes-Benz GLS-Class 2023 is a 7-seater full-size luxury crossover SUV that is the largest among the brand's GL SUV lineup. It is sold in the local market with a price of Php 9,690,000 for its sole GLS 350 d AMG Line variant. Powering this luxury vehicle is a 3.0-liter inline-6 OM656 turbodiesel engine that is capable of generating 286 horsepower and 600 Nm of torque. A 9G-TRONIC (9-speed automatic transmission) is used to send power to all wheels via the 4matic.

Dimensions-wise, the GLS-Class measures 5,207 mm long, 2,157 mm wide, and 1,823 mm high, with a wheelbase of 3,135 mm. In the Philippines, this German full-size luxury crossover SUV directly competes against the BMW X7.

The Mercedes-Benz S-Class 2023 is a full-size luxury sedan that is regarded as the German marque's flagship model. It is available in the Philippines in one variant only and the Mercedes S-Class 2023 Philippines price is Php 17,890,000. Powering this vehicle is a 3.0-liter inline-6 gasoline engine equipped with a 48-volt EQ boost mild-hybrid system, producing 435 horsepower and 520 Nm of torque. A 9G-TRONIC (9-speed automatic transmission) is used to send power to all four wheels via the 4MATIC all-wheel-drive (AWD) system.

Under the hood, the Philippine-spec V-Class uses a 2.1-liter turbodiesel engine that can produce up to 163 horsepower and 380 Nm of torque.

The Long variants in-turn come with a length of 5,140mm and a wheelbase length of 3,200mm.

Locally, the V-Class competes against the likes of the Kia Carnival, the Toyota Alphard, Lexus LM, Peugeot Traveler, among others.

Which is the most affordable Mercedes-Benz in the Philippines?

The Progressive variant of the A-Class is currently the most affordable car in Mercedes-Benz Philippines’ model lineup. The base variant of this sedan costs ₱2,490,000, while its top-of-the-line model is priced at ₱3,290,000.

How many SUVs are there in Mercedes Philippines’ vehicle lineup?

Which is the most expensive Mercedes-Benz model in the Philippines?

Priced at ₱10,890,000, the G-Class is the most expensive Mercedes-Benz car in the local market.

First the first time ever, Mercedes-Benz has opened an EV-only dealership. It is located in Yokoyama, Japan, and it primarily sells the brand’s EQ models.
Certain Mercedes-Benz S-Class and EQS models will come equipped with Intelligent Park Pilot technology, with more expected to follow.
Mercedes-Benz PH brings the new A-Class, with both sedan and hatchback body styles offering luxury, sophistication, and performance.
Mercedes-AMG announced that the F1-powered Mercedes-AMG One sets a new lap record of 6:35.183 at the Nürburgring-Nordschleife.
Mercedes-AMG debuts the 2024 EQE SUV in two available trim levels, scheduled to go on sale by the second half of 2023. This is the first electric vehicle-exclusive Mercedes dealership in the world. 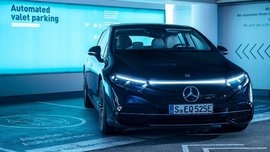 Mercedes-Benz, Bosch driverless parking tech a go for commercial use

It will have its first public use at Stuttgart Airport in Germany. 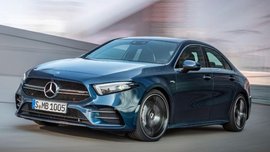 Available in both aesthetic AMG Line and performance AMG trims. Mercedes-AMG One smashes Nürburgring lap record in nick of time

This is the new king of the Ring. This is reportedly the brand’s first electric performance SUV.