A Fortuner is broken beyond belief at Toyota Service Center

Tong Santos has been devastated beyond belief as his SUV came out even more damaged after being repaired at a Toyota service center.
There are many negative adjectives being thrown at Toyota’s maintenance and customer service after Tong Santos, a Toyota Fortuner owner, railed against Toyota Fairview’s staffs in Quezon City for causing even more damaged on his Fortuner.

In detail, Tong’s wife wrote a fairly lengthy post blasting the service center for causing more damage to her husband’s car which basically only needed a restore job at the rear bumper after being hit from behind by a motorcycle.

>>> A couple from Quezon City selling fake LTO license plates was caught on last Wednesday, July 5. Read our article for more information.
Tong Santos has been devastated beyond belief as his SUV came out even more damage after being repaired at a Toyota service center

According to the couple, the Toyota Fairview service center initially advised them the repairs would take just 4 days. However, the job dragged on for a month. When Santos finally got his car back, he couldn’t believe in his eyes.
>>> Peep our list of 10 reasons why Filipino families love the Toyota Fortuner Tong Santos, a Toyota Fortuner owner, railed against Toyota Fairview’s staffs in Quezon City for causing even more damage on his Fortuner
The service center brushed aside with the advice that Santos should have his Fortuner repaired again with Toyota Fairview as the car still had a 3-month dealer warranty.

Santos also found out that his SUV appeared to have been used additionally for driving practice by the Toyota Fairview’s crew at the casa.

To top it all off, the service center management offered the couple a replacement for their destroyed Fortuner. However, this turned out that the couple has to pay more money to cough up a differential cost factor for that.

Tong Santos and his wife also urged competent authorities like the Department of Trade and Industry (DTI) to conduct an investigation into this issue as they could be just one of the many victims who are tricked by the Toyota’s service center. The DTI stated the center might be responsible to the couple and would be liable for civil and administrative damages.

Toyota Motors Philippines announced that the company has reviewed the problem and issued a formal apology to the couple and reassured its customers that it will take appropriate action. 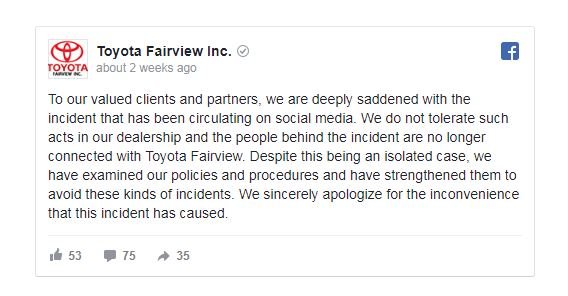