Two familiar models battle it out once again.

The Tucson is Hyundai’s challenger in the compact crossover segment. It is available in two variants that can either have a gasoline or diesel engine. With that in mind, the all-new Tucson can go up against the likes of the diesel-powered Honda CR-V.

Hyundai’s compact crossover can accommodate up to five passengers, which is two individuals less compared to the diesel Honda CR-V S variant. Despite the difference in seating capacity, the Hyundai Tucson and the Honda CR-V are some of the crossover vehicles you can buy that are equipped with a diesel engine. These two vehicles are also relatively priced closely, which adds to the reasons why we pitted each crossover from one another.

So, which one’s better spec-wise? To find out, we’re comparing the Tucson GLS+ CRDi 2.0 AT against the Honda CR-V S 1.6 AT. Again, both of these vehicles are powered by a diesel engine and are separated by a Php 128,000 price difference. The Hyundai Tucson is larger in all aspects than the Honda CR-V. Hyundai’s crossover vehicle even has a longer wheelbase despite having a five-seater capacity. The Tucson also has a lighter curb weight compared to the Honda CR-V. But on the other hand, the Honda model has more in the way of ground clearance.

For exterior equipment, both crossovers come with automatic LED headlamps, LED daytime running lamps (DRLs), and LED taillights. Both also have power-folding side mirrors, a roof-mounted rear spoiler, as well as roof rails. Front fog lamps can be found in the Honda CR-V, which are absent on the Tuscon. But, the Hyundai Tucson has a more modern-looking set of LED DRLs that are integrated into its grille.

In turn, the CR-V rides on a set of 18-inch wheels, whereas the Tucson gets a larger set of 19-inch wheels. The Tucson also has a power tailgate, while the CR-V S diesel has a standard tailgate.

Inside, the biggest difference between the two spec-wise is that the Tucson is a two-row five-seater while the CR-V is a three-row seven-seater. This obviously means that the Honda CR-V can accommodate more passengers. Of note, both vehicles come with a 60:40 split-folding second-row seats. A peek inside the Tucson's rear cabin

Both do provide a decently roomy interior equipped with leather-clad seats and automatic air-conditioning with rear vents. They also feature plenty of cup holders and cubby holes for storage. Also present for both models are 12-volt accessory outlets and rear USB charging ports.

The Tucson and the CR-V are equipped with fully digital gauge clusters as well as paddle shifters, standard cruise control, a push-to-start button, and a tilt-and-telescopic steering wheel. As for what’s different between their cabins, the CR-V S diesel lacks the power adjustable driver and front passenger seating that’s present on the Tucson GLS+. In turn, the Honda model gets ambient lighting while the Tucson does not.

Moving on to on-board entertainment, the Tucson gets an 8-inch touchscreen headunit with Apple CarPlay, Android Auto, USB, and Bluetooth connectivity. A view of the Tucson's cockpit

The CR-V meanwhile, gets a slightly smaller 7-inch touchscreen. But like the one on the Hyundai, this also has Apple CarPlay, Android Auto, Bluetooth, and USB connectivity.

Music or audio from the infotainment touchscreen is transmitted through the Tucson’s six-piece speaker set. The CR-V S diesel, on the other, hand gets more as it has a total of eight speakers. Lastly, the Tucson gets a wireless smartphone charger, while the CR-V S diesel does not.

The Hyundai Tucson GLS+ uses a 2.0-liter turbodiesel engine that delivers 183 hp and 416 Nm of torque. The engine is mated to an eight-speed automatic transmission. The CR-V S meanwhile, utilizes a 1.6-liter inline-4 turbodiesel engine that puts out 118 hp and 300 Nm of torque. The engine is paired with a nine-speed automatic gearbox.

The Hyundai Tucson clearly gets the upper hand when you compare the power output numbers.

The difference in power rating is then neutralized as both the Tucson and the CR-V come with similar mechanical bits. Both vehicles are front-wheel-drive and use disc brakes for all four wheels. The two vehicles also come with an electronic parking brake with an auto-brake hold function. These two models also have similar suspension systems in that they both use a MacPherson strut front suspension, as well as a multi-link rear suspension.

For standard safety equipment, both models come with what you’d expect from modern crossovers. They each come standard with anti-lock braking, stability control, traction control, a security alarm, and an engine immobilizer. The Tucson comes with a forward/reverse parking distance warning system

The Tucson then comes with a total of seven airbags while the CR-V is equipped with six. This potentially means better crash safety for the Hyundai model.

The Tucson and CR-V also have hill-start assist and parking sensors. Then again, the Hyundai does have a manual speed limiter, and a trailer stability assist system. These aforementioned features are not present in the CR-V.

Both of these models also come with reverse cameras for ease of parking. In addition, the CR-V also gets a tire pressure monitor just like the Tucson. The CR-V's airbags in action

For driver assist features, the CR-V gets a driver attention monitor, lane monitoring and departure warning (LaneWatch). That said, the Honda gets an advantage over the Tucson as the latter does not come with the aforementioned features.

If your priority as a buyer is seating capacity, then the Honda CR-V will certainly tick that box. The Honda gets a third row whereas the Tucson does not. Do remember that being able to seat as many people in a vehicle is a big selling point for Filipino buyers. Do you like the look of the Tucson's rear end?

Regarding power though, the Tucson certainly beats the CR-V. The Hyundai crossover has more in terms of horsepower and torque (+65 hp and +116 Nm).

Do note though that the CR-V does have more in the way of driver assist features. Also, do consider taking each for a test drive before settling on a final choice if you’re serious about getting a new crossover. Or do you prefer the CR-V's rear end? (SX variant pictured)

For more car comparisons, keep it here on the Philippines’ largest automotive portal. 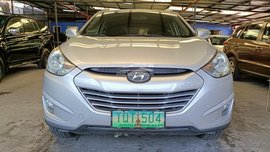 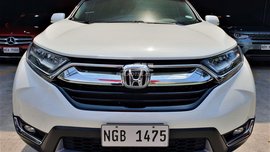