The S-Presso and the Wigo. They’re cute, but who’s got the better specs?

With the release of the Suzuki S-Presso in March 2020, the Philippine market has gotten one more city car model. In turn, the Toyota Wigo also received an update back in September 2020. Of note is its sporty-looking, top-of-the-line Wigo TRD variant.

Now, this begs the question: how does the S-Presso fare against the Toyota Wigo when it comes to specs? Well, let’s find out through this spec sheet comparison. Which is the better city car? The Toyota Wigo vs Suzuki S-Presso?

From those figures, you can tell that the Wigo is longer and wider, but the S-Presso is a bit taller. Despite that, both the S-Presso and the Wigo have the same amount of ground clearance at 180mm.

Another thing about the S-Presso is its tough, rugged look, which borders on SUV territory style-wise. It is, however, still a hatchback just like the Toyota Wigo. Both of these cars come with halogen lamps, LED rear combination lamps. The mid-range Wigo G and the top-spec Wigo TRD however simply have more in the form of a rear spoiler, a rear window defogger, and fog lamps.

Both of these cars come with halogen lamps, LED rear combination lamps. The top-of-the-line Wigo G however simply has more in the form of a rear spoiler, a rear window defogger, and fog lamps.

While the Wigo TRD looks different from the rest of the lineup, its TRD pieces are actually available as Toyota genuine parts. In short, you can turn the regular Wigo G and E variants to look like the Wigo TRD. Which city car has the better-looking rear end?

For wheels, the Toyota Wigo rides on a 14-inch alloy set with a machine-cut design. On the other hand, the Suzuki S-Presso comes with a 14-inch set of steel wheels with wheel covers.

Inside, both the Wigo and the S-Presso are pretty basic, yet comfortable. Both are equipped with an instrument panel with a speedometer, a tachometer, and cup and bottle holders, although the Suzuki S-Presso 2020 does have a 12v socket. Inside the Suzuki S-Presso A peek into the Wigo's interior

And lastly, these two city car model’s seats are foldable so their respective cargo capacities can be increased. The default cargo capacity of the Suzuki S-Presso is measured at 239 liters, while the Wigo is larger at 422 liters.

The Wigo and the S-Presso have very similar engines. Both the S-Presso’s K10B and the Wigo’s 1KR-VE have a displacement of 998cc, and both are gasoline powered inline-3s with 12 valves. There also is not much difference between the two in terms of power. The Toyota Wigo from the side The Suzuki S-Presso from the side

For braking, both the Wigo and the S-Presso use ventilated discs for the front, and drum brakes for the rear. Both also have hand-operated manual parking brakes.

Both the Wigo and the S-Presso come with common safety features you can expect a modern city car to have. Both are equipped with dual front airbags, child-proof rear door locks, an engine immobilizer, and anti-lock braking. For ease of parking, both of these city cars also come with rear parking sensors.

Available as standard to the Wigo TRD is a digital video recorder (dashcam). This particular part is also available as an option for the other Wigo variants.

As you can see above, the Wigo simply has more in the way of variants, whereas the S-Presso only has one for the Philippine market. Sure, the Wigo can cater to a wider budget range, but the S-Presso is the cheaper model, at Php 45,000 less than the Wigo’s most affordable 1.0 E MT variant.

Although, the S-Presso only comes with a manual which may be a deal-breaker for some people who prefer their city cars to come with an automatic.

Despite lacking an automatic transmission option, the S-Presso is an attractive model for several reasons. One major consideration in favor of the S-Presso is its affordability. Currently, it's one of the most affordable city cars on the market. As such, it would make an ideal car for a small family, a first-time car owner, or those who just need something cheap.

Note, though, that the Wigo is popular for a reason. It’s a Toyota so it enjoys great after-sales services, which can be accessed easily through the car brand’s wide local dealership network. There’s also the fact that it's been around in the Philippine market for much longer. One can say that it has already proven itself as a reliable, comfortable, but easy to maintain ride since its initial release back in 2012.

For more spec sheet comparison articles like this, keep reading here on Philkotse.com. 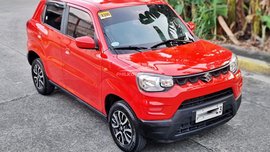