Just how different is the Ranger Raptor and the Ranger Wildtrak Biturbo?

The Ranger Wildtrak was like the franchise player of Ford Philippines’ midsize pickup lineup a couple of years ago. That changed when Ford introduced the Ranger Raptor, a truck that has arguably no viable competitors in the Philippine market

Guess what though, the Ranger Wildtrak, specifically the top-of-the-line Biturbo variant is actually quite similar to the Ranger Raptor. Sure, they are different looking, and are built for different applications, but nonetheless, these two models share a lot of characteristics especially with what’s under their hoods.

So which is the right truck for you? Which is better on paper? Let’s find out. It's Ford versus Ford in this specsheet comparison

If you look at the Ranger Raptor however, it looks beefier despite its taller height. This is because Ford designed the Raptor to have a low center of gravity in relation to its ride height. The Biturbo, on the other hand, has the familiar pickup truck stance that you see on its usual competitors.

When it comes to style, the Raptor, like its namesake is definitely more ferocious looking that it’s more utilitarian brother. Sure, the Ranger Wildtrak Biturbo has its own macho appeal, but the Raptor, from its aggressive grille and bumper, prominent fender flares, and huge skid plates, is undoubtedly the sportier looking of the two. Do note however that the top-spec Wildtrak comes with a set of mud flaps from the factory, while the Raptor does not. The Raptor in turn has LED headlights, while the Wildtrak is equipped with a pair of simpler, but still sufficient HID headlamps. The Raptor definitely has the beefier set of wheels

If you’re really that into detail, then you’ll definitely spot some similarities between the Wildtrak Biturbo and the Raptor’s interiors. Note however that the Raptor’s seats, the interior door panels, and everything inside it is made to cater to its price point.

As such, its leather seats feature the blue stitching, which is characteristic of Ford Performance vehicles, alcantara trim pieces on the leather seats, a different gauge cluster, and even the steering wheel is covered in leather. 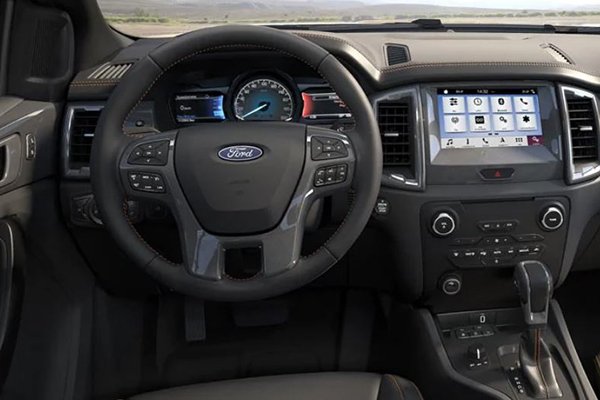 In comparison to the Raptor, the Wildtrak Biturbo, while it’s also comfortable, has simpler looking leather seats without the alcantara, and the hard black plastics are more apparent.

When it comes to on board gadgets, both the Wildtrak Biturbo, and the Raptor comes with an eight-inch touchscreen capable of navigation, has Bluetooth connectivity, two USB ports, six speakers, and the Sync 3 with voice recognition. 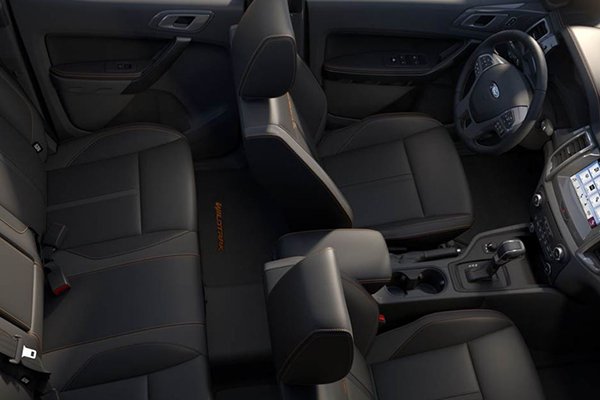 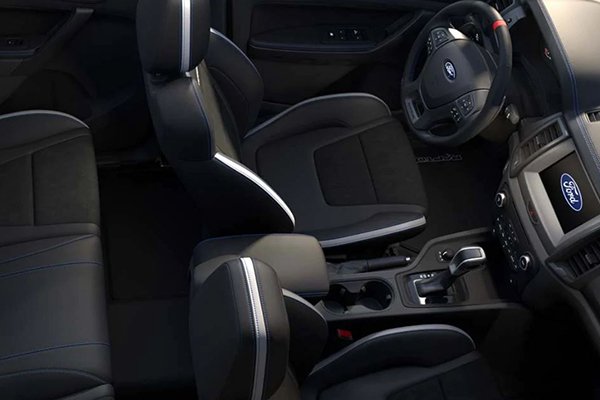 The Raptor's and the Wiltrak's interiors from another point of view

These two trucks also have the same 80 liter fuel tank capacity, the same maximum horsepower output at 210 horsepower, and identical maximum torque figures at 500 Nm. Both vehicles can even reach their maximum outputs at the same RPM range, which is 3,750 rpm for horsepower, and 1750-2000 rpm for torque.

And lastly, both also have a 4x4 drivetrain and rear locking differentials, so both can actually perform off road. There is a bit of difference though.

>>> Related: All-wheel drivetrain vs 4x4 – What are the differences? 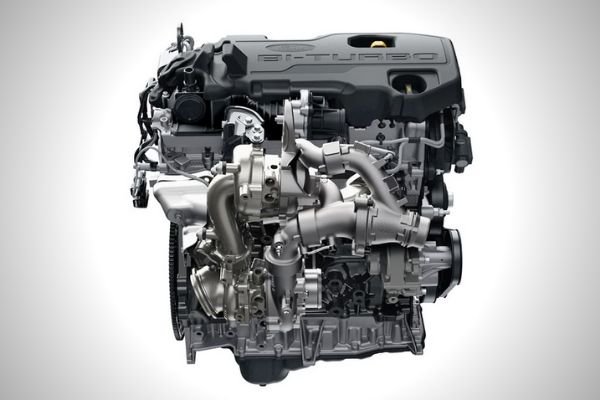 When it comes to suspension systems however, this is where the Wildtrak Biturbo, and the Raptor differs greatly. The Ranger Raptor has a lightweight aluminum double wishbone suspension with Fox Racing shocks with internal bypass dampers, and an anti-roll bar for the front, and coil-over Fox shocks also with an internal bypass reservoir dampers as well as a Watt’s Link for the rear.

What do all those words mean? Well essentially you can drive the Raptor like a madman through the jungle without breaking it in half. In short, it’s all about going very fast on rough roads, through jungle trails, through sand, mud, and it can even allow the Raptor to perform jumps. 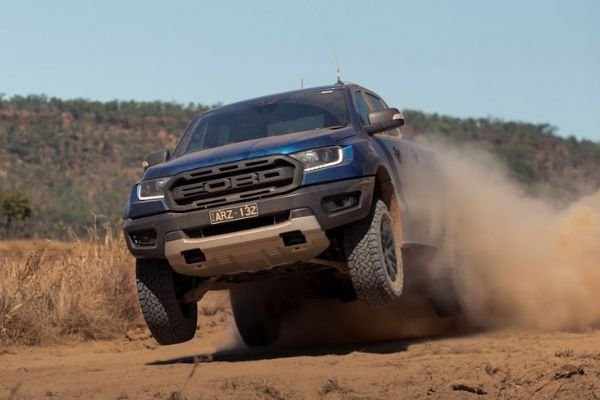 A jumping Raptor is always a sight to behold

Compare that to the Raptor’s measly 766 kg maximum payload capacity, and it’s less than optimal 2,500 kg towing capacity. This is because the Ranger Raptor’s sports suspension has sacrificed the ability to pull and carry huge loads, in exchange for its impressive baja-truck handling and robustness.

Note also that while these two have the same transmissions, 4x4 system, and engine, the Raptor has its terrain management system which of course offers more fun due to the presence of the Baja Mode.

What does it do? Well, it deactivates traction control, provides faster shifts, and adjusts the Raptor’s overall performance to allow it to go fast. Apart from the Baja-mode, the Raptor also has several terrain modes for sand, mud, rocks, normal (pavement), grass, and gravel.

>>> Find the best Ford in your areas

When it comes to safety, both the Ranger Raptor and the Ranger Wildtrak Biturbo are equally competent. Both have six airbags, both have hill start assist, forward collision warning, electronic stability with traction control, anti-lock brakes, ISOFIX, a lane keeping aid, auto high beams, parking sensors, a rear view camera, a volumetric burglar alarm, cruise control, and the pre-collision assist with pedestrian detection.

>>> A collection of Ford Ranger for sale at the cheapest price

If we’re being blunt, we can call the Ranger Raptor a very fun toy, while the Wildtrak Biturbo a less fun but still enjoyable to use tool. Why is this the case? Well as we’ve established in the performance section of this comparo, the Raptor is meant to do one thing, and that is to go wild and fast off-road. Sure you can also do that with the Wildtrak Biturbo, but you better have a chiropractor on speed dial for your crumpled up spine. The Ranger Wildtrak Biturbo isn't as agile as the Raptor offroad, but it can carry lot more

How about daily driving? Well, it’s been established that the Wildtrak, including its top of the line version, can actually do well on our congested streets. It’s not that heftier than most midsize trucks, and it’s actually very well behaved when it comes to parking. The Raptor on the other hand, while fun on lonely provincial paved or unpaved roads, can be a bit of a hassle in tight metro traffic. Also, there are actually some parking spots that are narrower than the Raptor. In contrast, the Raptor is just more fun off road

Do note though that the Raptor exists because it is fun. There’s a market for it, and there will always be that guy who dreams of experiencing what it's like to race in the Dakar or the Baja 1000. In contrast to this, the powerful, but also utilitarian Wildtrak Biturbo is a great option if you want something cheaper than the Raptor, something easier to drive daily in the city, and something that you can actually use for hauling stuff. 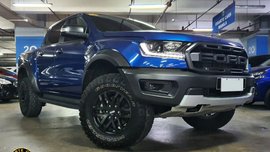