User's: 5.0/5
Join us in our Toyota Fortuner 2020 Philippines preview as we contribute to the internet rumor mill guessing how Toyota will update the 2020 Fortuner.

Toyota is a pretty reputable company when it comes to designing and making SUVs. Case in point is the Toyota Fortuner which has been around since 2004 which is 15 years ago!

Ever since its 1st generation, the Toyota-made SUV has been a leader in its market segment here in the Philippines. Everywhere you look wherever you are, as long as a surface is drivable, there will always be a Toyota Fortuner.

Now why is that? Well for one thing, the current iteration of the Fortuner as well as all of its predecessors are known to be reliable, very solid vehicles. While it's not the most powerful by any stretch, it makes up for it with its very low cost of ownership and its reputation for being very reliable. Also, the Fortuner, as is obvious from our list of Toyota Fortuner for sale on Philkotse.com, apparently retains its value for a long time. So for the year 2020, the last year of this decade, it has been speculated heavily that Toyota will undoubtedly give the Second generation Fortuner an update. And if Toyota indeed does have an updated lined up, it will come on a timely fashion too as the aforementioned 2nd generation of the Toyota mid-size SUV has been around since 2015 without much of a change at all.

2. Toyota Fortuner 2020 Exterior: Will it get updated looks?

To answer that question succinctly, yes it will get some exterior updates. There are a lot of sources regarding that though and many of their guesses are all over the place. So let us talk about the most realistic and most probable ones.

First off is the rumor that not much will change at all except maybe that the 2020 Toyota Fortuner exterior will get a slightly larger front bumper and a set of daytime running LEDs. Also, the rear will get a set of reshaped taillights. With regards to the exact shape, the source didn’t say.

The second source says that it will very much look like the new 2020 Toyota Hilux that was announced for the Australian market especially with regards to its front fascia. The grille now looks much more similar to the American spec 2019 Toyota 4Runner and a little bit similar with the one on the currently available Toyota Land Cruiser albeit a bit smaller in size.

The air-intake positioned below the aforementioned grille will also get a bit larger and the chrome around the fog lights will disappear and will be replaced by a black, matte finished housing. Other details likes the character lines of the Toyota Fortuner 2020 Philippines according to this source says that it will remain unchanged. And the third rumor, which we think is the weirdest, is that the Toyota Fortuner 2020 will borrow a lot of its exterior features from the current 2019 Toyota Fortuner TRD Sportivo. That means the roof rails will be colored in black and the pair of fog light housing will be shaped a little differently and will not feature chrome. >>> Recommended for you: 2020 Toyota Fortuner for sale

With regards to details about the supposed 2020 Fortuner’s interior, the rumors gets a little bit slim. What we do know though is that it will be as comfortable as the current Fortuner and that we also predict (and hope) that the infotainment system will get some updates.

Something along the lines of a new, faster operating system. Interestingly enough, Toyota has recently updated their infotainment systems to come with Apple CarPlay and Android Auto as of August.

Also note that the 2020 Hilux announced for the Australian market has a slightly redesigned dashboard which features wider AC ducts, and a slightly sleeker design. So something similar might also come to the 2020 Toyota Fortuner too. 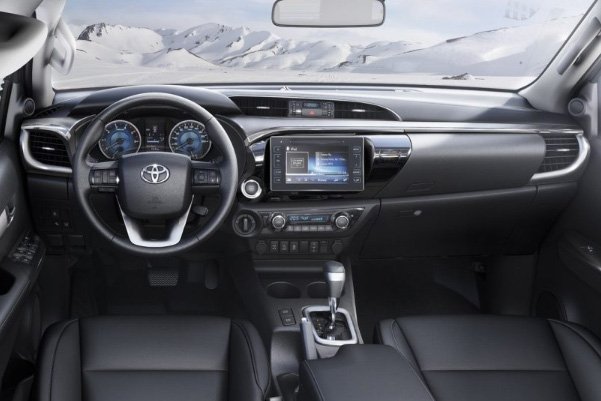 All are really excellently reliable engines that are able to make the appropriate amount of power for a vehicle of the Fortuner’s size. On the other hand, there is also this rumor that a 3.0 liter gasoline inline-4 will also come out.

Currently, the Fortuner sits just about the same as the rest of the pack when it comes to safety. It has the same amount of airbags as its top of the line Nissan Terra and Mitsubishi Montero Sport counterparts and has around the same safety rating as well.

The current Fortuner however lacks a tire pressure monitoring system and it doesn’t have front parking sensors. If they added those two features to the 2020 Fortuner, it would give it a winning edge against its SUV competitors in terms of safety. Also, new driver assist tech like the already existing Toyota Safety Sense suite will also help a lot to improve the already competent SUV.

According to a reputable source, the 2020 Toyota Fortuner like a lot of other SUV models from other brands will be a very well-kept secret. But if we have to guess though, an announcement regarding an update will come out from the end of 2019 to around the middle of 2020. But if that doesn’t happen, we can assure you that some sort of news on a Fortuner update will pop-up at the first quarter of 2020.

With regards to the pricing, some sources say that a base model should be available at around 31k USD which is around the same price of the current Toyota Fortuner 2.4 G Diesel 4x2 MT at Php 1,590,000. Here is the full price list of the currently-marketed Fortuner in the Philippines for your further reference:

>>> Get the latest pricing news via our Toyota Fortuner guide

And lastly, as a final word, you might want to take all the above guess work with a grain of salt. Some of the rumors might come true or all of them are actually way off, who knows.

Take a look at the detailed specifications of the current-gen Toyota Fortuner:

Q: Is a new Toyota Fortuner coming to the Philippines soon?

The 2020 Toyota Fortuner was officially launched in Thailand in June 2020. However, Toyota Philippines has yet to confirm as of when exactly the updated Fortuner will arrive to Philippine market.

Q: What are the best alternatives to the Toyota Fortuner?

Q: How many engine options are there in the Toyota Fortuner?

Q: Why is the Toyota Fortuner so popular in the Philippines?

The Toyota Fortuner is a reliable SUV which can meet various demands. A stock Toyota Fortuner can actually handle rough terrain and with little mods, can perform as a full-on off-roader. For others who prefer to use it in the city, the Fortuner can be quite nimble and despite its size can handle city traffic quite well. It also provides loads of practicality as it can sit up to 7 people and its cargo space is adequate. Not to mention, Toyota PH's large dealership network nationwide is defnitely able to accommodate whatever after-sales service your fortuner might need. Last but not least, there are a LOT of aftermarket parts for the Fortuner that can be purchased for cheap.

Q: Does the Fortuner have a sunroof or moonroof?

The PH-spec Fortuner doesn't come with either a moonroof or a sunroof, even on its top-of-the-line variants.

ALTERNATIVE REVIEWS TO THE 2022 Toyota Fortuner