Editor's: 4.2/5
For Filipinos with discerning taste and means, wanting no compromises. It was a few years ago when I tested the second-generation Subaru XV. Back then, the buzz was about the automaker’s new global platform, along with the two new colors that brighten up the smallest Subie crossover.

As they say, time flies and now I'm writing about the updated version of bestselling Subaru in the Philippines. Launched globally towards the latter half of last year and reaching stateside just this January, Motor Image Pilipinas, Inc. (MIPI) is quick to bring the facelifted XV here, making us among the first Asian countries to get the updated model.

2021 Subaru XV Facelift Full Review: Not for everyone

With subtle updates and trimmed-down range, is the XV still a small crossover worth your money? I got my hands on the sole 2.0i-S EyeSight for this review to find out.

As this is just a mid-cycle update, Subaru opted to give the XV only subtle changes on its exterior design. Primary of which is the diagonal slats on the grille, which are now more prominent over the mesh. The chrome that flanks the star-spangled emblem has also been revised, as well as the shape of the cladding by the LED fog lights. The facelifted XV from the side

Another alteration is found on the wheels, with the rims dropping the ninja star design of its predecessor. This time around, the two-tone 18-inch aluminum alloys sport intricately styled R spokes. And oh, there are new color options for this model year, namely Plasma Yellow Pearl, Horizon Blue Pearl, and Magnetite Grey Metallic. Sadly, the orange hue is dropped from the lineup. The XV from the rear

Overall, the changes aren't much but they’re enough to tell you that it’s an updated model. Not necessarily a bad thing, considering that the XV is still at par, if not more modern-looking, against its contemporaries.

2021 Subaru XV Interior Review: The biggest in its class

Three screens, leather, and orange stitching – the new 2021 Subaru XV retains its usual form, though the 8-inch infotainment screen at the center of the dashboard is an updated version with Apple CarPlay and Android Auto. Almost everything’s soft touch, except for some bits of hard plastics hidden beyond touchpoints. Piano black plastic trims are minimal, but I feel that those around the gear lever would need protection so they would age nicely. Space is practically generous inside the 2021 XV, which isn’t surprising since it’s the biggest subcompact crossover in the market. Head- and leg-room are abundant even at the second row, even for individuals standing at six feet. Horizontal space, on the other hand, is more enjoyable with only two people lodged at the back. Rear A/C vents are still absent, but that’s fine since front air conditioning’s enough to cool down the cabin quickly. Lots of room for the rear passengers

Cargo space is another great thing with the XV, maximized further by folding the rear backrests flat to reveal almost 1,200 liters of volume. Loading’s a bit high, though, but at least the cargo area’s got tie-downs and can be covered by a retractable tonneau. With the rear seats folded down, it offers a lot of space for cargo

Subarus are known for their high-tech cabin, and the new XV doesn’t disappoint in this regard. Apart from updated infotainment, the new screen also displays the view from the 360-degree cameras. The EyeSight feature is still the crowning glory of the Subaru family, with the updated version now residing in the facelifted XV. Apart from the very nifty adaptive cruise control – which is usable in city traffic, by the way – the collaboration of sensors and cameras work together for safe drives.

For the what-ifs, the XV’s safety systems won’t let you crash into something or someone, front and back – something I experienced first hand a few years back. The right side mirror auto-tilts on reverse as well, a very useful update to keep your good-looking rims safe from damages. 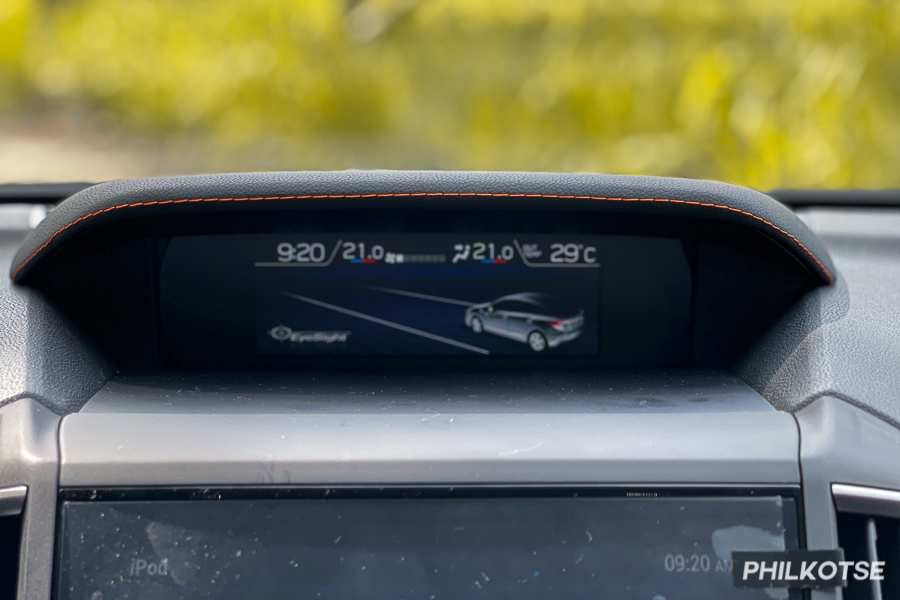 A smaller screen positioned on top of the headunit

Apart from those, the XV benefits from other high-tech conveniences like automatic lighting, electronic seat adjustments with memory function, auto brake hold, and new dual X-Mode. I wasn’t able to test the latter, though, but I’m happy to report that the XV now comes with speed-sensing door locks, which was something I noted to be missing in the outgoing model.

Whether in Sport or Intelligent mode, the XV’s 2.0-liter boxer engine didn’t fail to deliver power to all four wheels with urgency. The Lineartronic CVT didn’t feel like a CVT at low speeds, though there’s some rubber band feel when changing speeds at mid and high ranges. As for comfort, Subaru said that the coils and dampening have been updated on the facelifted model, and I actually felt that during the tests. While the pre-facelift model may feel a little harsh on imperfect thoroughfares, the new XV absorbs them better without translating the impact into the cabin. Outside noise insulation, however, needs a little more improvement, especially at high speeds.

The Subaru XV’s fuel consumption is pretty much the same as before given that there aren’t any changes in its oily bits. An hour’s plight on heavy city traffic at crawling speeds of 20 km/h returned 8.1 km/L, while highway sprints with EyeSight nailed at 90 km/h yielded 18.1 km/L.

Of note, only two people are on board during fuel efficiency testing, and with minimal cargo.

Truth be told, I’d be lying to your face if I tell you that the XV is an affordable vehicle. Even with the hefty P80,000 discount for the P1,828,000 introductory price (until the end of June), the price of admission is still steep for the segment.

But then again, with the plethora of standard safety equipment that the XV arrives with, most especially the award-winning EyeSight tech, the question is whether you want to be alive during adverse situations or prevent it completely. It’s a weighty choice, but one at least it’s available for Filipinos with discerning taste and means, wanting no compromises.

ALTERNATIVE REVIEWS TO THE 2023 Subaru XV