Nissan Terra vs Fortuner: The big & handsome battle it out!

Updated Jan 15, 2021
Once again, we're pitting a newcomer and a veteran SUV against each other: Nissan Terra vs Fortuner. Read on to find out which is the better SUV spec-wise.

The SUV market here in the Philippines is competitive; scratch that, it’s hypercompetitive. But the most dominant SUV in the country right now is the Toyota Fortuner, and it’s pretty obvious why; it has Toyota reliability going for it, as well as convenience and safety features for everyone on board. The Fortuner has managed to build a rock-solid reputation in its category.

But there’s a new kid on the block: the Nissan Terra. Big, powerful and truck-based as well, the Terra is no snot-nosed rookie, offering certain features that the Fortuner doesn’t.

Which is the better SUV? To answer that question, let’s get this Nissan Terra vs Fortuner comparison started with Philkotse.com! In terms of size, the Nissan Terra lords it over the Fortuner; this easily translates into more passenger space. The Terra is wider and longer, even as it shares the same height with the Fortuner, and it boasts a higher ground clearance, a huge advantage in off-roading. ...while the Nissan Terra is bigger and features more road presence

In terms of styling, both SUVs sport good looks that have their own unique appeal. The Fortuner has a sleeker, modern and fluid silhouette, in contrast with the Terra's more brusque and tough-looking aesthetics.

When viewed from the rear, the Fortuner is more rounded while the Terra features more angles

>>> In-depth review of these two SUVs can be found at:

A recent update to the Fortuner’s infotainment system saw the inclusion of Apple CarPlay and Android Auto, on top of its being navigation-ready. This puts it on equal footing with Terra's own touchscreen infotainment interface, although the latter does have an additional flip-down ceiling monitor for the rear passengers.

Regarding seating, both SUVs can comfortably accommodate seven people on leather-clad seats. The second-row seats on the Nissan Terra can be folded down flat with a simple push of a button, the easier to access the third row.

On the other hand, the top-spec Fortuner offers a power liftgate that comes in pretty handy when loading especially large items, although the third-row seats don't exactly fold flat, which still takes up a bit of space in the cargo compartment. 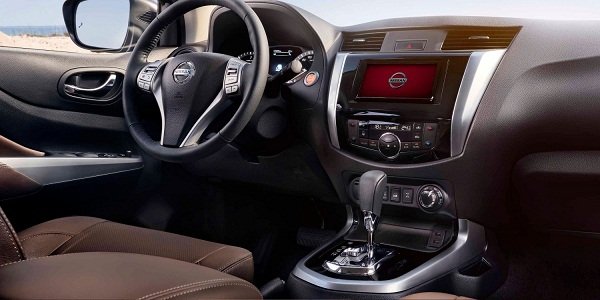 The interior of the Nissan Terra largely resembles the Navara's

So the Terra is easier to get into, while the Fortuner has a more convenient way of loading cargo outback. Hard choice.

One advantage that the Toyota Fortuner has is the tilt and telescopic adjustment on the steering wheel, compared to the Terra that can only be adjusted for tilt. Nevertheless, both of their driver’s seats are electronically adjustable, with the Terra featuring a power adjust lumbar function, to make drives easier on your lower back. Lastly, the top-of-the-line Fortuner has 14 cupholders as one of its convenience features, compared to 12 on the Terra. 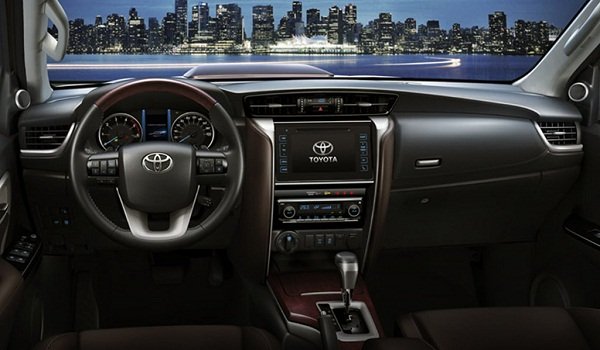 Who says faux wood is out of style?

>>> Suggested SUVs comparison for your reference:

Based on the table above, the Nissan Terra 2020 has a similar engine output to the Toyota Fortuner 2020. The former's diesel mill produces a bit more horsepower and the same amount of torque while being smaller in displacement compared to the Fortuner's powerplant. Meanwhile, both the Terra and Fortuner have locking differentials, which are useful for going hardcore off-road.

As for their brakes, the Fortuner has ventilated discs on all four wheels, whereas the Terra uses front discs and rear drums. However, the Terra has the advantage of having one more forward gear, enabling it to cruise better on highway drives.

In terms of passive safety features, both the Toyota Fortuner and the Nissan Terra appear evenly matched, with a similar complement of airbags and ISOFIX anchors. When it comes to active safety features, the Fortuner offers antilock brakes, traction control (to minimize traction loss under heavy cornering) and trailer sway control that keeps your heavily-laden trailer from moving side-to-side uncontrollably. Meanwhile, the Nissan Terra 2020 comes with the Nissan Intelligent Mobility suite that includes hill start assist, hill descent control, and a lane departure warning system. The real highlight of the package is the Intelligent Around View Monitor, that gives the driver a simulated 360-degree view of the vehicle’s exterior to eliminate blind spots.

This feature is useful in tight parking situations, and also for off-roading to avoid obstacles. No need to roll down your windows to gauge your SUVs distance from nearby hazards.

>>> Widen your search in our cars for sale section for more best car deals.

While it appears that the top-of-the-line Toyota Fortuner is the superior vehicle in terms of features, the Nissan Terra's strength is in its relative affordability. The Nissan's base and top-spec variants are priced more competitively in relation to their Fortuner equivalents, without leaving you feeling shortchanged.

The Fortuner has its reputation for reliability, but Terra's counterpunch comes via its Nissan Intelligent Mobility suite.

In the end, the decision ultimately rests with you; if you want an SUV vehicle with a sophisticated set of safety features, then go with the Terra. It's quite capable as an SUV anyway, and at least you won’t be driving a very common model on the road. But if you prefer the peace of mind that a brand with a reputation for reliability brings, we’d recommend the Toyota Fortuner. Would you want a vehicle model with a reputation for reliability? Or would you like to try something different, a competent and exciting industry rookie?