Updated Aug 04, 2020 | Same topic: Best Advice for Car Buyers
Filipinos love pick-up trucks. But, due to the number of choices, it might be hard to choose the right truck. As such, here's a list of the best pick-up truck in the Philippines in 2020.

Like our friends from across the great big pond, Filipinos love pick-up trucks. They have almost endless potential when it comes to utilitarian pursuits and they’re also comfortable.

There is also the point where pick-up truck models here in the Philippines are actually except excise taxes making these vehicles a cheaper but still comparable alternative to SUVs and luxury sedans in terms of providing comfort. And now, in 2020, it can be argued that we’ve reached the pinnacle of trucks here in the Philippines. We have numerous choices of models to choose from and there’s surely one that’ll fit your lifestyle perfectly. There are the likes of the humble and very utilitarian Toyota Hilux J, the Isuzu RZ4E LT, to the fun-oriented, and very powerful Ford Ranger Raptor. What a time to be alive!

As such, a Filipino pick-up truck buyer might become confused with all the available choices in the market right now. As always, Philkotse is here to help by listing the five best selling pick-up trucks in the Philippines this 2020 as well as the  pickup truck Philippines price list

The Toyota Hilux is a pick-up truck model, which like the Toyota Corolla Altis, has achieved notoriety as “indestructible.” And for this very same reason, the Hilux has a few incredible feats under its belt. It’s the first vehicle to ever reach the north pole, and in 2019, a modified version claimed the 2019 Dakar Rally win.

And of course, who could forget that time when Top Gear UK tried to “kill” a Toyota Hilux by drowning it in the ocean and parking it on top of a building which was then demolished by explosions. Of course, the Hilux still started. The Conquest is tough, rugged, and stylish without being too flashy

Today, the Toyota Hilux in the Philippines is probably one of the more popular pick-up truck models currently being sold. It still has the rugged capability of its older generation versions but now, the top of the line spec which is the Hilux Conquest 2.8-liter G 4x4 AT comes with a 6.5-inch touchscreen with Bluetooth, six speakers, and DVD playing capabilities.

It’s also no slouch when it comes to safety as it comes with ABS with EBD, stability control, traction control, hill start assist, trailer sway control, and seven airbags.

While we can say that the Strada is also tough, the highlight of this truck is that it probably comes with one of the more attractive exterior designs currently available in its market segment. Just look at it;

Apart from that, the Strada’s history and current overall design can be traced to Mitsubishi’s stellar performance in the Dakar rally where the Mitsubishi Pajero Evolution won a whopping 12 wins and 161 stage wins.

Why is this worth the mention? Well for starters the Strada still uses the brilliant Super Select II, an easy to use yet very robust 4x4 system that’ll get you out even from the stickiest situations. 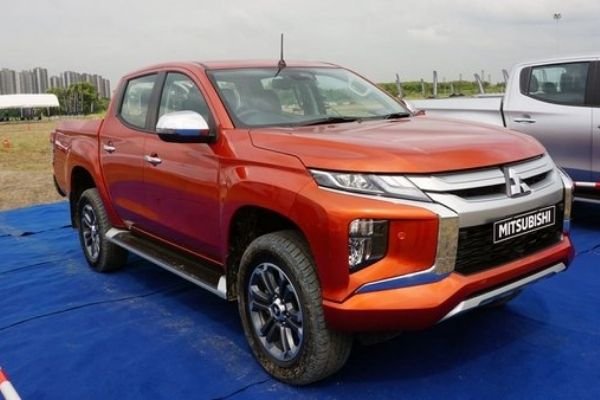 We've got to admit, the Strada is a very striking looking pick-up truck

Next, the Strada also has one of the more premium interiors among the trucks available in the country today. The top of the line spec features cruise control, a navigation ready 8-inch touchscreen with Bluetooth, a dual-zone climate control system, and front parking sensors.

The top of the line Mitsubishi Strada also has a competent amount of safety features. It has seven airbags, ABS with EBD, stability control, and traction control. What it does have that the Hilux doesn't have a blind-spot detection system.

This is due to the fact the people know Isuzu as diesel specialists who can make reliable engines that can provide just the right amount of power when you need it. Note though that a new 3rd-generation D-Max is already being sold in Thailand and it’s only a matter of time when the fresher, and sexier all-new next-gen D-Max is launched here in the Philippines. The 2nd-gen D-Max still looks good despite its age

While the interior of the D-Max is probably the most utilitarian out of the bunch, the D-Max still has some rather useful interior amenities and a competent set of safety equipment.

The Ford Ranger name has been in use by Ford since the 80’s on three different vehicles. All of them are tough trucks, but the most relevant to us the currently available T6 Ranger. Before that though, the Ranger name was used by a rebadged Mazda BT-50.

In the present, the Ford Ranger can come in a lot of different flavors from the simple but robust XLS to the very powerful Ranger Raptor. And yes, while the Raptor can be designed to hail from a totally different truck market segment, remember that there’s also a 2.0 Ranger Biturbo Wildtrak which shares the same engine as the latter. Like the rest of the car companies in this list, Nissan has been making tracks for a very long time. Now, for the Philippines, they’ve got the Nissan Navara D23, which is probably the most high-tech in terms of on-board safety features on this list.

For the top of the line 2.5L 4x4 VL, it comes with the Nissan Intelligent Mobility suite which constitutes a 360-degree around-view monitor, hill start assist, hill descent control, four exterior cameras mounted on the grille, a pair for the side mirrors, and one of the tail-gate. The Navara. It's grunty and high-tech at the same time

Due to these cameras, the Nissan Navara can also have a configurable display with close-up function. Also present is an object detection system that provides a warning to a driver whenever an object is in close proximity.

The Navara also comes with several sensors spread around the vehicle. And yes, you can actually use the 360-degree around-view for off-roading, like for spotting rocks and other obstacles.

So, what is the best pick-up truck in the Philippines 2020?

While the Philippine government is currently looking into bringing back excise tax for pick-up trucks, even that may happen, Filipinos will always buy these brilliantly robust, and tough vehicles.

As we’ve said earlier, they’re versatile. They can be a reliable and comfortable family car, and for businesses, they can mean the difference between positive cash flow and bankruptcy.

Also, they’re pretty fun vehicles, especially for off-roading. And you know us Pinoys, we’ll spend money for fun, that’s why the Ford Ranger Raptor sold well here after all.

Did this article help you make your choice? If it did, let us know. If you want to read more articles about cars though, keep reading here on Philkotse.com.