After a drive with the revamped Ranger in Thailand, let's just say it can topple anything on its path at will. After a long while, we’re back at it again. We, motoring journalists, have been yearning to travel for work, and Ford Philippines drew first blood this year. For me, this trip was rather personal. It was my first time traveling internationally since the pandemic started; it was also my first time visiting the Land of Smiles; it was also the first time I drove on the wrong side of the road on the wrong side of the vehicle; and, as far as I know, we were the first ones in the world to try the next-generation Ford Ranger before it even hit the showrooms. It was an important encounter of firsts – a definitely worthwhile string of events.

Inevitable connecting flights, brazen weather, and a short three-day affair – it wasn’t the perfect setting for a tropical holiday on the beautiful island of Phuket, Thailand. It was, however, the best backdrop to put the new-generation 2023 Ford Ranger through its paces.

The new-generation Ranger aims to follow up on the successes of its predecessor, despite the fact that it still rides on the T6 platform, albeit, heavily modified. After some pep talks before the drive, we put the new Ranger to the test – and oh boy, was I not disappointed. With reservations, of course.

On the sides, the chiseled panels continue the machismo from upfront, which can also be found at the rear. Gone were the uninspired block lights of the outgoing model; the taillights now come with LED graphics to keep up with the times. Probably the best part is that the stamped Ranger wordmark has been retained for this version.

The current Ranger is already a macho-looking truck, but Ford wants to amplify its ruggedness further. That dominating on-road presence is the very thing that made the nameplate popular in the Philippines; this story will be the same with the new-generation model. Just like the bigger F-150, the new Ranger’s bed comes with slots for C-clamps, which means woodworking is possible in this smaller truck. There are power outlets positioned near the tailgate, as well, demonstrated during the pre-drive briefing by charging a laptop while a block of wood is clamped onto the opened tailgate. By the way, the tailgate has also been equipped with a damper – also demonstrated by lifting it using only a finger.

The gray bedliner is standard on the Wildtrak, while the upper part of the bed gets plastic liners as well to protect the sheet metal. The silver rails over the bed not only serve as a design continuity with the silver roof rails and step boards but also as functional tie-down points when needed. Ford also added a handy step-board for the bed, which is integrated onto the bumper for easy ingress/egress. Quite nifty, I should say. 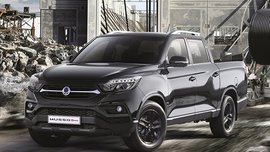 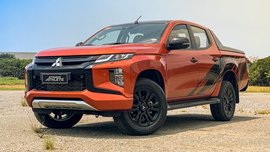 As the latest version of the midsize truck, the Ranger foregoes analog controls and displays in favor of a fully digital instrument cluster and a massive 12-inch infotainment vertical screen with SYNC4 in Wildtrak guise. The displays are quite legible and the contrast of colors makes the texts pop out, while the capacitive feature allows for a responsive interaction with the center touchscreen.

But just like most vertical infotainment systems that integrate most (if not all) controls onto a hulking screen, the learning curve is steep. During the tests, I had to pull over and find the menu for the around-view monitor. Going through the menu of drive modes through a knob around the shift-on-the-fly 4WD modes wasn’t seamless, either, leaving a stain on the overall experience. Interior of the all-new Ranger

The biggest bane of this digitalized setup was the fact that the rear differential lock is clustered within the infotainment screen. Granted, the button on the outgoing model was also digital but in the new setup, there lie the challenges in trusting technology.

In the off-chance that the screen malfunctions in the midst of your off-roading escapade, there’s a chance that one can get stuck with either the diff. lock ON (and limp back to a dealer), or OFF, which means the inability to get out of a very slippery situation where a diff lock is needed. A manual override button would have been nice and could potentially unnerve more experienced (and older) off-roaders. Wildtrak badge on the seat

Thank heavens Ford chose to separate the dual-zone HVAC controls onto a cluster of buttons and knobs, which allows for a no-look operation even whilst driving. The 360-degree-view camera’s display is hands down the clearest display I’ve seen so far – something that was very useful during the off-road course.

Speaking of the off-road course, Ford prepared a manmade area that’s hundreds of kilometers away from Phuket to showcase the Ranger’s reinvigorated off-road prowess. They called the area the Ranger-Ville, which consists of steep rocky slopes, a water-wading traverse, extremely slippery muddy trails, knee-deep ruts, rocky crawls, and very loose sand. Basically, Ford wanted us to go over everything but snow, which should be all covered by the preset drive modes of the truck. After a few rounds with the pre-set course, the Ranger proved it’s at home on dirt more than ever with the help of technology. It’s as if the revamped truck can tackle anything on its path at will.

But the improvements were beyond technology. Ian Foston, the T6 platform chief engineer, said that the Ranger can go over the off-road course without the help of the drive modes, and I believe him. On our way back to Phuket, we were surprised with another course consisting of everything we experienced in the Ranger-Ville, albeit, in natural occurrence within a jungle. I didn’t use any of the drive modes and kept it au naturel by just switching from 4H and 4L, as well as toggling the diff. lock on and off. The 360-degree-view camera played a major role in finishing the job, considering that it was my first time driving on the right-hand side of a vehicle, more so, on an advanced off-road trail.

After the dirt tracks, we went on to a long drive through the mountains of Krabi and onto the long stretches of Phang Nga highway to get back to Phuket. The roads were wet, which made the traverse on winding roads extra precarious.

The Ranger was easy to maneuver through the twisties of Krabi. Given my inexperience in right-hand side driving, the lane centering function was my guide. The steering felt assisted yet decisive, exuding confidence through the tight corners of the mountain passes. The Ranger has different drive modes for various road conditions

On the highway and on provincial roads, I felt the Ranger’s ride refinement. It now holds a candle to the segment frontrunner, the Nissan Navara, in terms of overall comfort, if not better. The fact that the new Ranger Wildtrak was equipped with adaptive cruise control didn't make the long highway stints a chore.

But what the new Ranger gained in refinement, it relatively lacked in oomph and grunt. The Ranger Wildtrak I tested was powered by a bi-turbo 2.0-liter diesel engine, putting out 210hp and 500Nm of torque. There were moments when I had to overtake at around 110 km/h (Thailand’s legal speed limit) to keep up with the convoy, only to be met with a feeling of wanting more pull from the rear wheels. I could feel the added heft on the truck taking its toll on the otherwise already powerful four-pot oil-burner. It performed adequately on on-roads as well

The silver lining here was that the 10-speed automatic transmission was smooth and didn’t have any shift shock, with the shifting almost indiscernible. The drive was civilized, but I wish there was more when I needed it most. Then again, the Ranger isn’t a race truck, so there’s that.

I’d be lying if I tell you that I went home without a smile from that short but sweet Ranger experience. The new version of Ford’s midsize truck poses a huge promise for those waiting for the revamped model. The 2023 Ford Ranger has set the bar higher for lifestyle trucks – a win for discerning consumers who are constantly looking for something better.

Ford was keen on keeping the arrival of the new Ranger on Philippine shores a secret. All we got was a generic “very soon,” which could mean an arrival in the next few months. I’d wager we’ll see the truck around July, so expect some announcement from the company soon.

The smartest, most versatile, and most capable Ranger ever

Of note, the features and engine mentioned here aren’t guaranteed to be available locally. For the sake of the tech-hungry crowd, we wish they do – though we’re still keen on having a manual override for the diff lock beyond the screen for our peace of mind.

Pricing is likewise to be announced as the launch draws near.

ALTERNATIVE REVIEWS TO THE 2022 Ford Ranger