Which 2023 Ford Ranger variant should you buy? [Comparison Guide]

The all-new Ranger has eight variants.

Ford Philippines has finally launched the all-new 2023 Ford Ranger. This event took place in July 2022, and the pickup now has a total of seven new variants for the local market. All of them assume a new exterior style, and most are kitted out with all-new features. Let’s help you find out.

When it comes to styling though, the Wildtrak variants come with a unique front grille and Matrix LED headlamps. The midspec Sport and XLT variants meanwhile still come with LEDs headlights, though the Sport in particular gets a blacked-out grille, while the XLT comes with a chrome trimmed grille. Meanwhile, the XL gets a plain non-glossy grille, while the XLS gets a painted grille. The last two also come with reflector halogen headlights. The Ranger Wildtrak from the rear

Furthermore, the XL and XLT also lack the LED daytime running lights that are present on the rest of the lineup. The only trim that doesn’t have front fog lamps is the entry-level XL, though the pair on the XLT are halogens. The rest meanwhile get LED front fog lamps.

Also available exclusively on the Wildtrak trims are roof rails. The top-spec variants and the Sport trims also get an easy-lift tailgate, as well as dual front tow hooks. The rest in turn have single front tow hooks. For wheels, the XL 4x4 has a set of 16-inch steelies. The XLT in turn gets 16-inch alloys. The XL4 4x2 meanwhile is fitted with a set of 17-inch alloys, whereas the Sport trims and Wildtrak trims ride on a set of 18-inch alloys.

Inside, all Ranger trims can comfortably seat up to five. The Wildtrak then comes with a dual-zone automatic climate control system, whereas the rest get a manual air-conditioner. Also, only the top-spec Wildtrak comes standard with two 230-volt inverter outlets on the second row and cargo bed.

For the driver, the Wildtrak, Sport, and XLT variants come with a leather steering wheel. The XLT, XLS, and XL though, do not have an photochromic rear-view mirror that is present on the rest of the trims. For seating, the Wildtrak gets a combination of leather and synthetic covers. The Sport also gets a similar material for its seats but without the Wildtrak stitching and styling bits. The XLT, XLS, and XL meanwhile come with fabric seats.

The Wildtrak’s front row seats are also power-adjustable, and the two top-spec trims are the only variants that come with dual USB ports for the first and second rows.

For entertainment, the top-spec Wildtrak trims are kitted out with a 12-inch touchscreen headunit. The Sport trims, XLT, XLS, and XL variants meanwhile, gets a 10-inch touchscreen. In terms of connectivity however, both the larger and smaller headunit both come with wireless Apple CarPlay, Android Auto, USB, and Bluetooth connectivity. A closer look at the 2023 Ranger's 12-inch touchscreen

For speakers, the entry-level XL gets four, while the Wildtrak trims, Sport trims, XLS, and XLT trims get a total of six. The Wildtrak, Sport, and XLT variants also provide a windscreen mounted USB port, and a wireless phone charger. Only the Wildtrak 4x2 gets a rear parking sensor, while the Wildtrak 4x4 has both front and rear sensors. The two Wildtrak trims are also the only variants that get a total of seven airbags, while the rest make do with six.

Under the hood, the Wildtrak 4x4 AT stands out from the pack thanks to its 2.0-liter bi-turbo diesel engine that can make up to 208 horsepower and 500 Nm of torque. It is also the only variant that has a 10-speed automatic gearbox.

The only variants that are available with a 4x4 drivetrain and an electronic locking rear differential is the Sport 4x4 AT, and the XL 4x4 MT.

The XL, Sport, along with the Wildtrak 4x2, Sport 4x2, and XLS variants use a single turbo 2.0-liter diesel mill. It is less powerful than the bi-turbo engine with an output of 168 horsepower and 405 Nm of torque. This engine is then paired to either a six-speed automatic gearbox or a six-speed manual tranny. For the XLT, XLS, and XL uses a front disc brake and a rear drum brake. For the higher-spec trims, the drum brake for the rear is swapped for a disc brake. Only the Wildtrak trims come with an electronic parking brake. The rest uses a standard, manual hand-operated parking brake.

For suspensions, all 2023 Ranger variants come with a double-wishbone front suspension, and leaf springs for the rear.

If you are considering a truck that is capable of serious off-roading, then out of the Ranger variant lineup, the options you have are the top-spec Wildtrak 4x4 AT, the entry-level XL 4x4 MT, and the mid-spec Sport 4x4 AT. All three have locking rear differentials, and all three are 4x4 models.

Then again, only the Wildtrak 4x4 AT can balance going all-out on features, safety with off-roading capability. The Sport is the middle ground in this regard, though it offers an attractive styling package that many might like. 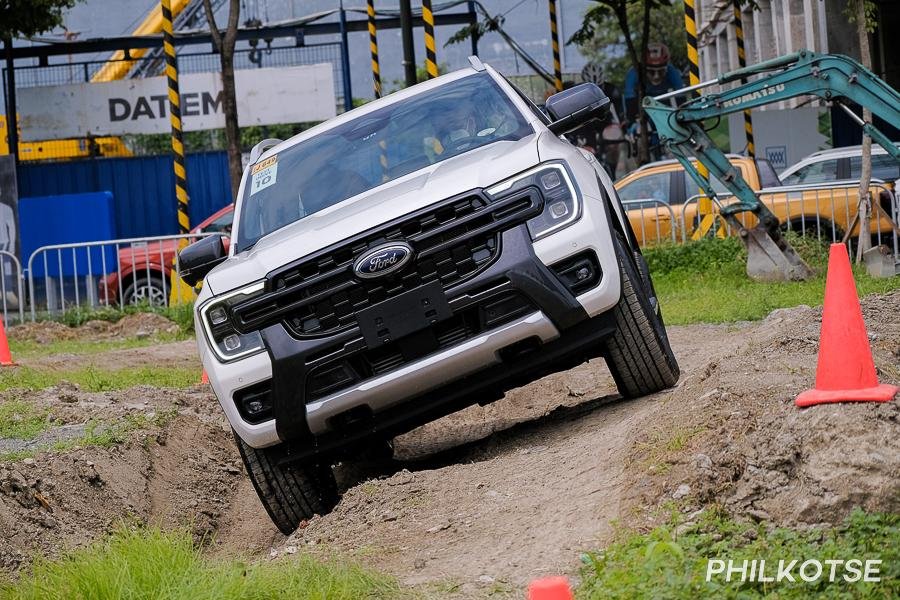 The 2023 Ranger Sport on an off-road course

If you just need a truck that works and is great at carrying stuff, the XLS and XLT might be more to your liking. They aren’t as barebones as the XL, plus, dealing with traffic is easier thanks to their automatic gearboxes.

On the other end of the spectrum, the XL might be the truck for you if you prefer a more utilitarian ride.