Best Toyota Rush Accessories in the Philippines to modify your vehicles

Bitten by the modification bug? Luckily there are a ton of aftermarket Toyota Rush accessories in the Philippines for Rush's owners.

The Toyota Rush was a surprise hit when it was released in 2018. It was seen as a direct answer to Mitsubishi Xpander but in a more rugged package.

It was heralded as the sub-compact crossover to rule them all and it helps that it kind of looks like a mini Toyota Fortuner especially that front end. It may not be the unanimous darling of car reviewers when it was first released but in time their numbers on the road grew exponentially. Toyota Rush is one of Toyota's best selling units

This may be due to the fact that the public had sky-high expectations for it at first but was disappointed with the reality. Once the hype died down and accepted the Rush for what it is; an economical, compact crossover that wasn’t really meant to be... rushed, it suddenly filled in a very important niche in Toyota Philippines’ new car line-up.

Heading back to my earlier observation, the Rush looking like a mini-Fortuner is certainly a plus point for the model. Personally I prefer cars to be compact and keep the personal aspect of it.

Larger cars also take too much space for me and my single slot parking lot apartment thus a smaller car is more practical. So to take that characteristic and take the awesome bits from the much macho looking Fortuner gives you an interesting value proposition and potential for modding and personalization. 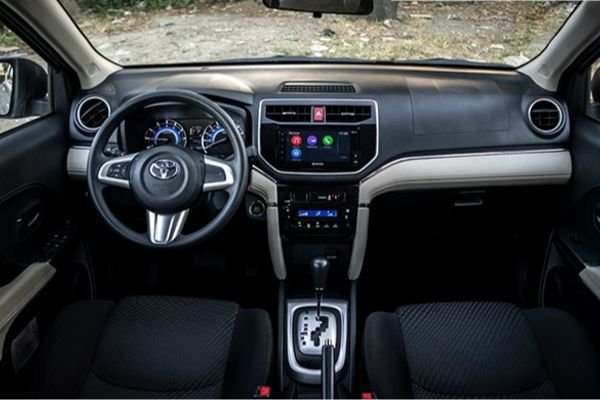 You have tons of options out there to make your Toyota Rush more distinct and unique. From Chrome (shudder) bits to go fast parts the market is certainly growing that, more often than not, you can go overboard.

So here at Philkotse.com, we gotcha covered, Fam! Here is a list of the available performance and aesthetic mods or accessories you can find for your Toyota Rush!

The top TRD or Toyota Racing Development models for the Toyota Rush have LED headlamps and tail lights installed and they look gorgeous, but let's say you have the lower-tiered models or you want to upgrade them to stage 2 projectors or replace them?

The aftermarket definitely can give you options out there. Only your imagination is the limit with what you want your headlamps to look like, you can find KAT – Kustom And Tuning on Facebook to hook you up on some sick brights. 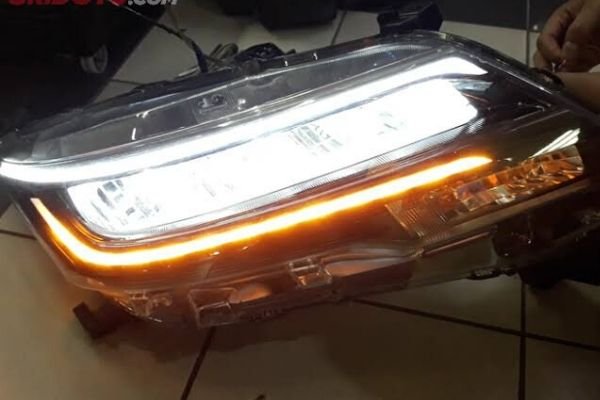 The stock lights on the Toyota Rush look great, but these are better

One of the Toyota Rush model’s biggest selling point is its ride height. There are many, though, who want to give their Toyota Rush a sleek makeover by sneezing up its stance by lowering it by a few inches. By lowering your car it lowers the vehicle’s center of gravity vastly improving its handling capabilities.

Autospecs Motor Sales on Facebook can sure hook you up on that part. That might just sound like an excuse but it really does improve handling and makes your ride look amazing with flush stance and some decent wheels. Speaking of wheels... Lowering springs improve the stance of any car

The 17-inch TRD alloy wheels look OK on the Toyota Rush, but both guys and gals will tell you, new shoes will always make your day even better. The same goes for the Toyota Rush.

Since the Toyota Rush Philippines runs on leaf springs like a truck, why don't you put a set of offroad mags and tires and stick some decent spacers in there while you’re at it? Or these sweet mags that complement the car even better than the stock ones.

Upgrading your mags and tires have their benefits as well. Lightweight wheels and tires are considered unsprung weight, meaning reducing them would significantly improve the way your car drives and handles. You will find it will affect acceleration, turn-in rate, and even fuel economy.

These aren’t just reasons to convince your significant other to buy you new wheels but are legitimate! Yes, they are! Ask Ryan of RF Wheels on Facebook for the best set and the best prices. Admit it, after looking at this pic, you suddenly want the Toyota Rush

There is no replacement for displacement, or so they say. The Toyota Rush seems to have this saying ring true as it most definitely is not a speed demon, not by a long shot. Thank your lucky stars there are shops out there that can help you wring out every ounce of performance out of your Toyota Avanza.

Speedlab, one of the more premier tuning garages in Manila has a power package that can drastically increase power and torque by installing a special piggy-back computer to the ECU to set the engine free from the constraints set by the manufacturer for one reason or another. 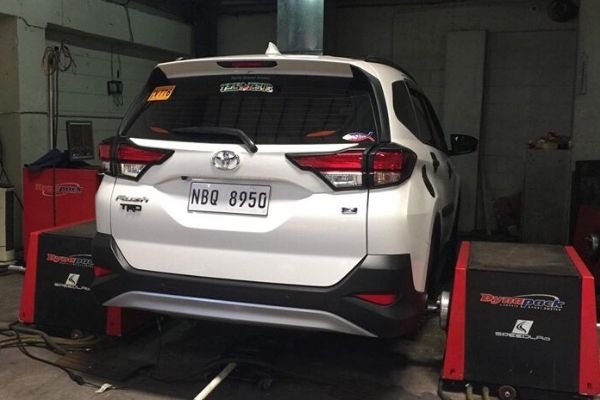 For a reasonable price, you can upgrade your car's ECU with a piggyback computer

>>> Tips to buy car accessories in the Philippines:

Another mod is for the exhaust system. DRIFT Xaust located in Taytay, Rizal can help you out on that. Modifying your car’s Air intake and exhaust system frees up the car to combust fuel more efficiently and exhaust all the spent gasses and give your exhaust note an inspiring upgrade.

5. Ceramic coating: The amazing accessories for your Toyota Rush

Ceramic Coating is an amazing procedure where you coat your car in a compound formula increasing the clear coat’s surface hardness making it less susceptible to light scratches or swirl marks. You wouldn’t want to mess up your Toyota Rush’s perfect look, would you?

There are a ton of Garages that can do ceramic coating in the Philippines but I’ve found Derudz Auto Care on Facebook with experience in coating a Toyota Rush. It may be more expensive than regular waxing but the benefits justify the price. There are many other Toyota Rush accessories in the Philippines you can use to modify your vehicles, but again, you wouldn’t want to go overboard, would you? Just remember to keep those mods tasty and tactful.

>>> Get the best deals for car accessories on Lazada PH