Pictures are cool, but you’ll learn more about the Legender with this video.

If you’ve been following automotive news sites closely, then you’ll know that Toyota debuted the facelifted version of the Toyota Fortuner in Thailand a few weeks ago on June 4, 2002.

It was also launched with the facelifted Toyota Hilux. What surprised the world, however, is the Toyota Fortuner Legender. It's a very macho looking version of the facelifted Fortuner, and it takes the Toyota sport utility vehicle’s exterior looks, as well as on-board technologies into another level.

Now, we’ve already seen stills of the Toyota Fortuner Legender in the metal. And understandably enough, a lot of people were excited. It is, after all, a great looking evolution of the Fortuner’s overall design, a design that has been around since 2015. Apart from its looks, there’s also the new Fortuner’s updated safety suite and upgraded convenience features. Overall, it’s a very substantial facelift, and the word “upgrade” might be a more appropriate term.

Recently, a Thai Youtube channel called driveautoblog has had the great opportunity to get up close and personal with the Fortuner Legender. Scroll down below to watch the walkaround video. Do note however that the video is in Thai.

As you can see from the video, the Legender, while retaining that subtle elegance of the Toyota Fortuner, takes it up a notch with its angular fog light housings. It also has a more angular front bumper, as well as hefty looking black pieces bordering the grille.

Note also that the Legender’s daytime running lamps and headlamp cluster now features a futuristic look. On the other hand, the LED parking lights mounted on the lower bumper have this flowing effect to it that might improve visibility. The grille itself, which Toyota made to be wider and more “open” is a very notable trait of the Legender. We’re saying more open because the grille now has a different pattern to it, and presumably, its design allows for better airflow to the intercooler and the radiator. The aforementioned, of course, makes great sense since the Legender’s 2.8-liter turbo-diesel now makes more at 201 horsepower and 500 Nm of torque.

To the sides, there’s also the new set of two-tone wheels, and to the rear, there’s the addition of the “L” shaped blade-like trim pieces, as well as the redesigned taillights.

Inside, however, the video shows that not much has changed to the layout of the seats. Although as we’ve noted before, it has a new gauge cluster, the addition of the Toyota Safety Sense which includes dynamic radar cruise control, a 360-degree view camera, and other very useful driver assist features. 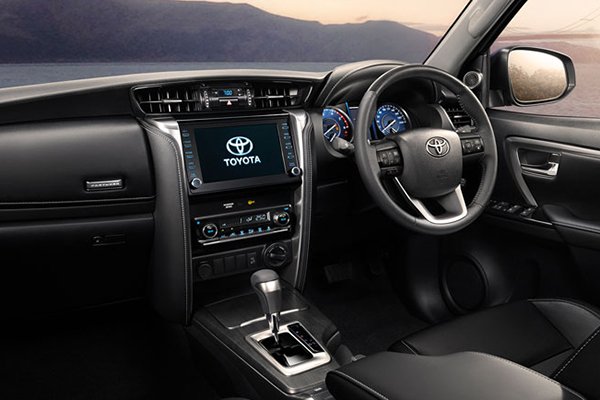 Besides the new gadgets, the interior has the same layout and design

Do note however that if TMP introduced the new Fortuner and the Fortuner Legender here in the Philippines, the prices will be a little different. These prices mentioned here are just estimates based on the current Philippine Peso to Thai Baht exchange rate and are no way close to the real prices.

If you’re very excited about this new Fortuner variant, stay tuned here on Philkotse.com for more.