2021 Nissan Patrol: Expectations and what we know so far

The new Patrol is reworked inside and out.

Japanese car brand Nissan is, undoubtedly, on a roll when it comes to the new updates it released ever since the ‘Nissan Next’ campaign started. The first Nissan vehicle among the campaign that we will get in the country is the Navara pickup truck that comes with a new tougher look.

The next updated Nissan vehicle we will likely get is the new Terra which debuted first in the Middle East as X-Terra. Just like the Navara, both share more robust updated design features that instantly sets them apart from their respective outgoing models.

Nissan shared that the ‘Nissan Next’ campaign is its plan to completely transform its brand into having a more daring approach. So far, we can see that Nissan is doing an exceptional job as seen on the new Navara and Terra.

Now, it seems like the Nissan Patrol will be joining the list of updated vehicles soon. The new full-size SUV comes with huge design updates that could thoroughly help Nissan with its rebranding strategy.

Nissan designer Alfonso Albaisa already confirmed the design details of the new Patrol. So, here are the things we can expect.

Not all cars that are updated are welcomed well by car buyers. Some say that some models should have just carried over its outgoing design features as the newer model looks odd. However, this may seem the unlikely case for the new Nissan Patrol.

The most striking new feature of the new Patrol is the sleekier front fascia. The C-shaped daytime running lights (DRLs) now take up the edges of the larger headlights. The headlights are now designed next to the larger V-motion grille. This type of grille design is similar to the grille fitted on the new X-Terra. Another noticeable new design feature is the fog lamps housing that now stretch up to the headlights.

A unique C-shaped chrome trim has been added to each side of the fog lamp housing that runs through the front bumper. With the way the front fascia is designed, it is safe to say that Nissan is maximizing the large proportions of the front fascia to make it look tougher and more intact.

As for the sides, no major changes can be seen. The new Patrol still sports blacked-out A, B, and C pillars that create a floating roof design. It seems like Nissan doesn’t fancy updating the sides of its new releases just like what we saw with the Patrol’s midsize SUV sibling, the Terra. The rear has been tweaked to highlight the Patrol's large proportions

The rear fascia, however, did get some subtle updates. The design of the rear taillights is pretty much still the same. It only got larger and the length is emphasized by the new LED taillights. A chrome trim has also been added to connect each end of the taillights.

Just like the front fascia, the updates on the rear end of the new Patrol are designed to further highlight the large proportions of the SUV. Overall, we think that the new Patrol will stand out when seen on Philippine roads as not a lot of SUVs come with this type of sleek and aggressive design finish.

The interior of the Patrol’s midsize SUV sibling, the Nissan Terra, is reworked to create a more luxurious feel for drivers and passengers. Without a doubt, Nissan did a good job doing so with the integration of the redesigned dashboard, steering wheel, and new infotainment screen. Yes, this is the interior of the next-gen Nissan Patrol

Going for a more luxurious interior is also the strategy for the new Patrol moving forward. The new Patrol is offering diamond-stitched, quilted leather seats as an option. This creates a more luxurious appeal that is normally seen on higher-end vehicles of luxury brands such as BMW and Mercedes-Benz.

Also adding to the more luxurious interior approach of the new Patrol is a quieter cabin. This is a subtle update that will not be seen on paper but will make a huge difference in providing a more comfortable on the road experience.

The 2021 Nissan Patrol is offered with two engine options. The first option is a smaller 4.0-liter V6 engine capable of producing 275 hp and 394 Nm of torque. 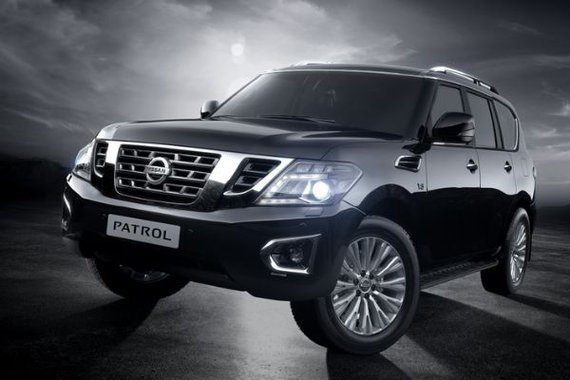 The second option is a larger 5.6-liter V8 engine capable of producing 400 hp and 560 Nm of torque. This engine option is the one currently offered by Nissan Philippines and is likely to be carried over until the new Patrol arrives locally. It is coupled to a 7-speed automatic transmission with manual mode.

The new Patrol is equipped with two infotainment screens placed on the center console instead of just one seen from the outgoing model. The top screen shows the displays such as navigation, while the bottom screen displays the information needed to scroll through the system.

The infotainment system also supports both Apple CarPlay and Android Auto. Unfortunately, the Patrol didn’t get a redesigned steering wheel just like what the new Terra has. Nonetheless, the new Patrol is still one of the best full-size SUV that comes with a luxurious interior.

We can expect to see a revamped Nissan branding when 2021 comes. So far, we are getting a feel for what is coming next for Nissan thanks to the new Navara, new Terra, and new Patrol. In consideration of the confirmed updates on the Patrol, we can expect it to further expand its name in the local SUV segment. Where do you rank the next-gen Patrol in the local full-size SUV segment?

Unfortunately, Nissan Philippines hasn’t released any statement yet as of this writing regarding the plans for the 2021 Nissan Patrol. We will have to wait for further announcements from Nissan Philippines as it seems like it is currently eyeing the upcoming launch of the 2021 Navara facelift.

The new Nissan Patrol is expected to come with a higher price point just like most facelifted models. With just the two newly integrated infotainment screens alone, we can tell that it will go higher than its current price point of around Php 3.9-million.