To guide car buyers this 2020, here's a list of all sedan cars of Honda available in the Philippines.

In our quest to make you, our readers a car buying expert here’s a list of all of Honda’s sedan models available here in the Philippines.

1. Brio Amaze: The most affordable sedan car of Honda

Since 2014, the Honda Brio Amaze has replaced the City as the most affordable Honda sedan available here in the Philippines. And compared to the City, ironically enough, the current Brio Amaze is small and is more suited for driving in the city. As for the City though, it has essentially moved up in the food chain as a model and is selling quite well, but more on that later. Be amazed! Seriously though, it looks decent and it's fairly reliable

Being the sedan version of the Brio, the Honda Brio Amaze utilizes the same L12B i-VTEC inline-4 with the new Brio hatch. The current Brio hatchback however now has a more modern, eagle-eyed look whilst the Brio Amaze sedan still uses the old, wide-eyed and more conservative 2016 design. There’s not much in terms of power, but considering that the Brio Amaze is a very light sedan, do expect it to be nimble in the corners.

Inside, the Brio Amaze V Navi which is the model’s top of the line variant comes with a 2-DIN Honda DVD Navigation system capable of playing CD and DVDs and is able to connect via aux-jack, USB, and Bluetooth. The driver of the Brio Amaze also has a digital fuel gauge, and a fuel consumption meter.

For safety, the Brio Amaze Navi comes with dual front airbags and an anti-lock braking system with EBD.

While Honda City has indeed moved up in price throughout the years, the current version is a competent compact sedan in terms of style factor and on-board features. But, let us talk about its engine first.

Powering the Honda City is a 1.5-liter, chain drive, inline-4 with a single overhead cam. It takes around 118 horsepower and 145 Nm which, considering the City’s size and weight, is more than enough power to not make it underpowered.

Power is sent to the front with a continuously variable transmission (CVT) or a 5-speed manual. Quite frankly, the 5-speed on the City is as silky smooth as its predecessors. That, of course, is a quality that Honda is known for and such, we highly suggest getting it over the CVT. For those who just want to get to A to B though, the CVT will do just fine. 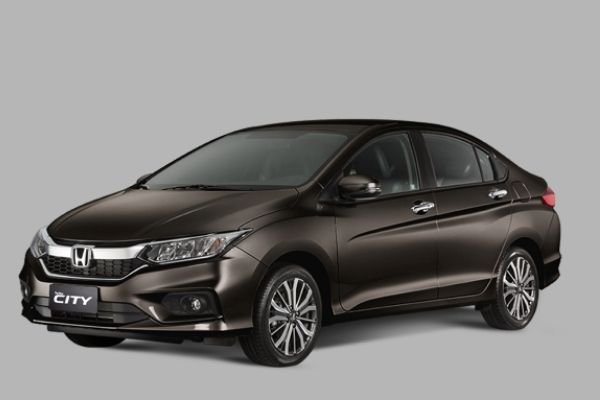 It's just the right amount of sporty and elegant

With regards to the Honda City’s exterior styling, the currently available version for us is just the perfect blend of sporty and elegant. Sure, it has grown deeper and more visible character lines (especially on the hood), but those are tastefully done and it actually complements the whole look of the vehicle. Overall, it ain’t a vanilla looking car but it is just subtle enough. A rarity among Honda models today.

The same goes for the City’s interior. It’s simple, well thought out, and the top variant has a lot of pleasant feeling soft-touch surfaces. Oh, the trunk can hold up to 536 liters and is very expansive.

>>> Check out the latest price list & installment for Honda City

For safety, the VX+ Navi is very well equipped. It has dual front airbags, side airbags, and side curtain airbags. The VX+ Navi also a vehicle stability assist system, hill start assist, an emergency stop signal, and a multi-view camera.

For its interior, the driver and passengers are kept entertained by a 7-inch touchscreen with navigation that can connect via USB, Bluetooth, and HDMI.

>>> For further reference: Sedan cars in the Philippines | Example of the most affordable and most fuel-efficient

If you want something sportier than the Honda City, then there’s the Honda Civic. Its top of the line variant comes with a 1.5-liter turbocharged, DOHC inline-4 capable of making up to 170 horsepower and 220 Nm of torque.

Weirdly enough and to the disappointment of many, many Honda guys, they gave it a CVT. While there’s nothing wrong with it per se (and paddle shifters are available), NOTHING in the world will ever beat the feeling of rowing through your gears whilst performing the perfect heel-toe-shift. So yeah, they essentially turned the once sporty Honda Civic into a grocery getter. But then there’s the Civic Type R which has a manual but that’s a story for another time.

Regardless of that, the current Civic RS Turbo is still a great looking car. 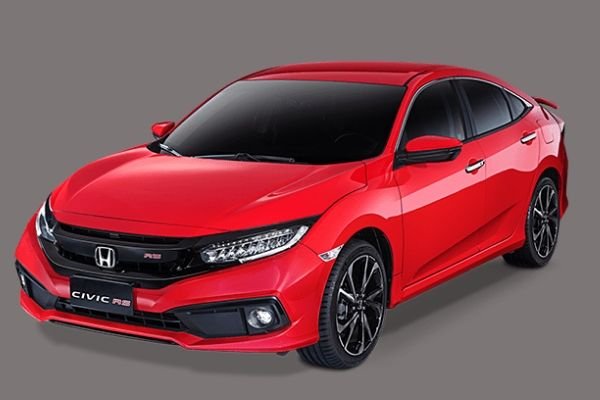 Aggressive even, especially when viewed from the front

Inside, the cabin feels sporty as well. Seating feels low to the ground and the seats are well-bolstered. And yes, while its RS variant is a bit on the stiffer side, it is spacious. On-board features for the top of the line Civic include a 7-inch touchscreen with two USB ports, HDMI and iPhone connectivity, and Bluetooth. For the driver, there’s a smart entry with a push to start button, navigation, a turbo meter, and a front center arm-rest.

4. Honda Accord: A luxurious sedan car of Honda

For those seeking a luxurious sedan, Honda has the 10th-generation Accord. It is spacious, it’s elegant looking, and of course, its engine is beefier than the Civic’s. While it’s the same engine, the Accord’s L15BE makes 187 horsepower and 260 Nm of torque

Like the Civic, the Accord comes with a CVT. It does have a semi-auto mode with paddle shifters though to break the monotony of driving an oversized bumper car. 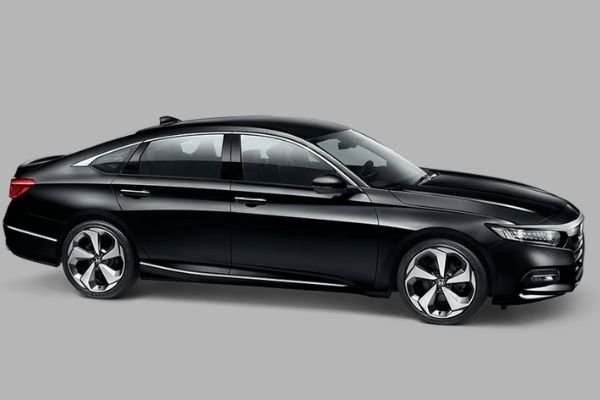 The Accord is luxurious but due to its size, it can be unwieldy for some drivers

The strength of the Honda Accord is much more appreciated by the passenger. It is spacious, comfortable, and the ride is dead quiet. On-board features include an 8-inch touchscreen with Bluetooth, two USB ports, an iPhone connectivity. Passengers are kept comfortable with an intelligent dual-zone automatic air-conditioning system.

Safety features include six airbags, ESS, ABS with EBD, stability assist, and many others.