To aid car buyers, Phlilkotse lists down all sedan cars of Toyota available in the Philippines. We've also included a short review and price list of their respective variants.

To guide car buyers this Christmas season and beyond, we've listed all the available Toyota branded sedans currently being sold here in the Philippines.

We've also thrown in a short-ish review for each model and a price list of each model's variants.

The veritable lord of sedans here in the Philippines: Toyota Vios is the Philippines’ top-selling model since the initial release of its first-generation back in 2002 as the first generation XP40, which is lovingly nickname “Superman” due to the shape of its grille.

As each generation of the Vios came out, it continued to hold to the top spot in terms of sales volume. The same of course is true with the current Yaris ATIV based facelift that we have today. It’s still as popular as its predecessors and is still one of the “bread and butter” among all Toyota cars sold in the Philippine market.

Now, why is that? We don't know what people are calling the all-new, face-lifted Vios yet

For those who are unaware of its significance as a car model, the Vios, apart from being used by thousands of young professionals as a daily driver, is also used by several types of public utility transport providers here in the Philippines.

That includes the hundreds of Transportation Network Vehicle Service or TNVS drivers mainly from Grab, and of course, the thousands of more Taxis roaming around the Philippines.

This is because of this sedan’s consistent reliability and the abundance and affordability of spare parts. Going to the current Toyota Vios, it is now better equipped than its predecessors especially with the XE variant and above.

Inside, the top variants now come with a 7-inch touchscreen with CD/MP3, Weblink for Android and iOS, Bluetooth connectivity, and six speakers (G and G prime). 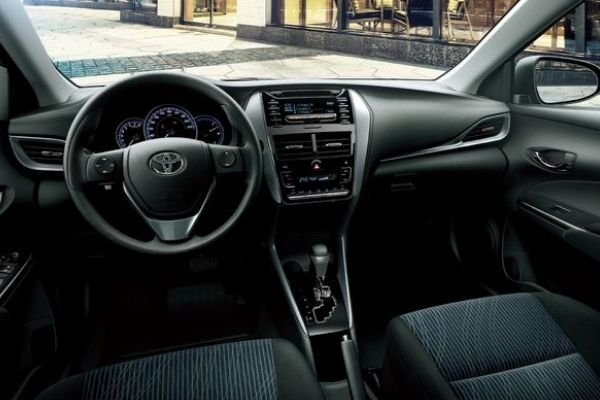 From XE to G Prime, Toyota also gave it more passive safety equipment like dual front airbags, side airbags, curtain airbags and a knee airbag for the driver. For the rest of the variants, standard features include an anti-lock braking system with EBD, hill-start assist, and vehicle stability control.

In terms of exterior design, the all-new, facelifted Vios now looks like the sedan version of the Toyota Yaris XP150 that’s sold here in the Philippines and most of the Asian markets. While the new look is a bit polarizing, it does have some new equipment to go with it like the LED daytime running lights.

Note also that the Prime variants get the “Prime” body kit which includes a rear spoiler, side skirts, and a front and rear bumper skirt.

Before you start groaning about the CVT, note that the one found aboard the Toyota Vios is made by Aisin, a company that has been making continuously variable transmissions for Toyota since forever. As such, it can be counted on for reliability.

>>> Get cheaper Toyota Vios for sale by reliable sellers

While the Corolla is known around the world as that cheap car that can easily reach 500,000 kilometers on its odometer with little maintenance, there’s another model that can do the same thing while not making you feel like a caveman.

Its V6 versions can also make a respectable amount of power from the factory. And many, or rather, a LOT of people have been modifying them up to the point there’s now even Camry competing in NASCAR.

We at Philkotse.com are of course talking about, the Toyota Camry.

The Toyota Camry has undergone a lot of changes since it was released initially almost 38 years ago. First, it was classified as a compact car from 1982 – 1998, otherwise known as the narrow-body Camry. Later on, from 1991 to the present, it became a mid-size sedan as the wide-body. Back then, it was a simple but roomy vehicle Today in the Philippines, the Camry’s current 8th-generation or XV70 is a car that commands respect. It’s the kind of car that can provide comfort, practicality, and reliability for a man/woman who doesn’t waste his time on trivialities. The kind of person who will become a top executive one day.

On the outside, the above qualifications can be gleaned from the look of the Toyota Camry. It has a very authoritative looking front fascia which an enormous looking grille and the long-wheelbase will definitely tell you that this isn’t some rinky-dink compact but rather, a heftier mid-size sedan.

Also, we appreciate that Toyota didn’t go ham with the wheel design. The spoked wheel is an elegant look that’s suited for what the company is intending for the Camry.

Inside, the higher-spec 2.5V Toyota Camry is a well-equipped vehicle especially for the sake of the driver. The steering wheel can be tilted and adjusted for reach automatically, the driver seat is 8-way power-adjustable with lumbar support, the car has cruise control, and the gauge cluster is a 7-inch TFT display. 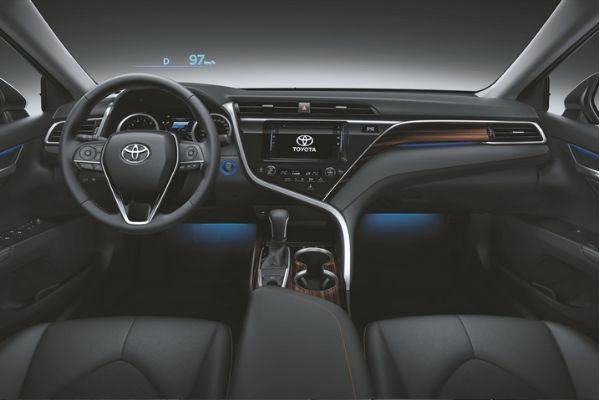 For the passengers, the front seat and the rear seats are also power-adjustable and the armrest located in the rear comes with controls for the 3-zone climate control and the power sunshade.

The head-unit is also the standard Toyota display audio system that has smartphone mirroring for Android and Apple, and music streaming. All are tied up to a decent sounding six-speaker system.

Under the hood, both variants of the Toyota Camry have the 2.5-liter 2AR-FE inline-4 gasoline engine which is rated to make a very decent 181 horsepower and 231 Nm of torque. Power is sent to the front with a six-speed automatic transmission.

>>> Related: 2021 Toyota Camry: Expectations and what we know so far

For safety, the current Philippine-spec Toyota Camry is very well equipped. The model comes standard with ABS with EBD, stability control, hill-start assist, dual front airbags, side airbags, curtain airbags, and a knee airbag for the driver. A set of clearance and back sonar sensors.

As you can see from the list of safety stuff above, the Camry doesn’t have a lot of driver-assist-features. That for us is huge a positive as it keeps the driver very much involved with driving the car. That, of course, is a breath of fresh air in this modern age saturated with cars that can scream at you when you veer away from a lane.

We sure hope though that Toyota Philippines will introduce the Toyota Camry TRD which has a supercharged 3.5-liter V6 in the future.

>>> Get Toyota Camry for sale at cheaper prices

Sitting in between the Toyota Vios and Toyota Camry in terms of price and size, the Toyota Corolla Altis is known simply in other markets around the world as the Corolla. So yes, the Altis is essentially the Corolla.

Currently, the new Toyota Corolla Altis being sold in the Philippines is actually the sedan version of the E210 Toyota Corolla and like the Vios, a lot the Altis’ previous generation units are used as Taxis due to their reliability.

For the 12th gen Toyota Corolla Altis, the non-hybrid versions are powered by the 1ZR-FE engine, 1.6-liter inline-4 gasoline engine that makes around 121 horsepower and 153 Nm of torque. For the Toyota Corolla Altis hybrid, its engine is a 1.8-liter gasoline engine that can produce 97 horsepower and 142 Nm. Combine that figure with the electric motors and it makes 121 horsepower, the same output as the other variant.

Both variants have a front-wheel-drive layout but the 1.8 V Hybrid only has a CVT. The rest has a CVT version and a 6-speed manual version. Like the CVT found aboard the Vios, we’re pretty sure that the one aboard the Toyota Corolla Altis is also made by Aisin so it is pretty reliable. 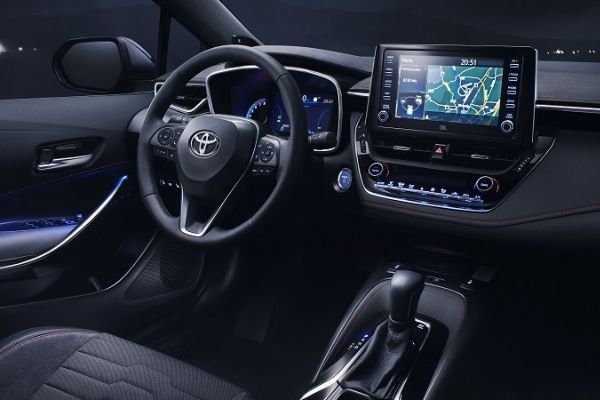 The interior of the Altis Hybrid is well arranged but it could sure use more colors. Blue perhaps?

Inside, the Hybrid and the 1.6 V comes with a ton of convenience and comfort features. There’s an 8-way power-adjustable seat of the driver, a 4-way adjustable seat for the front passenger, leather-clad seats, an auto-dimming mirror, a Toyota display audio with T-Link for Android and Apple, six-speakers, and the smart keyless entry.

The Toyota Corolla Altis 1.8 V Hybrid is the only variant that comes with the Toyota Safety Sense.

>>> Get Toyota Corolla Altis for sale at cheaper prices

For more guides like this one, keep reading here on Philkotse.com or you can also check out the list of all Toyota SUVs in the Philippines to broaden your choice