2021 Ford EcoSport: Expectations and what we know so far

Despite the continuous unfortunate events that are happening this year, it seems like Ford Philippines does not waver and strives to provide the country with more great vehicles. As such, Ford Philippines recently introduced the F-150 pickup truck and Territory compact crossover.

The introduction of the new Territory raised questions in the local market. Some of which include the plans for the new EcoSport. The Territory could potentially replace the EcoSport as the people’s entry-level vehicle to the American marque.

With that in mind, one can expect that the EcoSport needs to bring something new and fresh for Filipino car buyers. Fortunately, we already got a new EcoSport variant called the Active seen first in European markets.

There are also renderings that show a different look for the subcompact crossover. As of this writing, Ford Philippines hasn’t confirmed any of the details regarding the matter. So for now, here are some of the things we know already and are the things we could expect for the 2021 EcoSport.

Let’s start with the most probable change we can expect for the 2021 Ecosport, the new variant called Active. The 2021 Ford EcoSport Active is currently available in Europe that is marketed for individuals who want a more off-road looking subcompact crossover.

The most notable additions we can see in the EcoSport Active are the thicker black plastic claddings that can be found around the wheel arches. This alone already separates the Active variant from the current EcoSport that Ford Philippines offers. To make the black plastic claddings look more fitting, the roof has been blacked-out as well. This creates a two-tone paint finish that gives the EcoSport a more lively appeal. Other blacked-out parts include the fog light housing, rear bumper, and side mirrors.

According to Ford, the design of the EcoSport Active is heavily off-road inspired. With that in mind, Ford also decided to improve the EcoSport’s capabilities. The EcoSport is coming with higher ground clearance. However, Ford did not specify the exact number. The side view looks sleeker

The steering has been retuned and been installed with a limited-slip differential so off-roading would be smoother. Despite all off-roading cosmetic and performance updates, we still won’t recommend you to use the EcoSport on bumpy off roads.

The EcoSport Active is still designed with a unibody chassis and a front-wheel-drive configuration. Using the EcoSport in tough terrains would give you a hard time getting out of them and you can expect some damage due to its solid construction.

>>> Related:  Which 2021 Ford EcoSport variant should you buy? [Comparison Guide]

Inside, no significant changes have been made by the Blue Oval brand. However, the EcoSport Active variant gets a custom A (stands for Active) badge stitched to Eco-leather seats that use recycled materials. The Eco-leather seats with the A badge

Just like the current model, the 2021 EcoSport is still expected to offer fabric seats for all variants except the EcoBoost Titanium, and Active if introduced by Ford Philippines. This means that we still get manual seat adjustment, manual climate control for lower-end variants, and automatic climate controls for the higher-end variants.

The Ford EcoSport is currently in the subcompact crossover segment, competing against the likes of Geely Coolray, Chery Tiggo 5x, and Kia Stonic. With that in mind, we expect the 2021 EcoSport to still offer the same ample legroom and headroom for the front and rear passengers.

Some rumors say the new EcoSport could be powered by a 1.5-liter 3-cylinder engine that makes 135 hp for the lower-end variants or a 1.2-liter turbocharged engine for the top-spec variant. The turbocharged engine is said to produce 117 hp and 230 Nm of torque.

But as we all know, the EcoSport is marketed in the Philippines as an economical small car for the family. Increasing the displacement of the engines will generally result in higher fuel consumption. As such, these rumored engines are unlikely to be introduced by Ford Philippines.

No changes are expected as well for the on-board tech of the 2021 EcoSport. This means that we will still be getting the 8-inch infotainment screen with Ford SYNC that supports both Apple CarPlay and Android Auto. 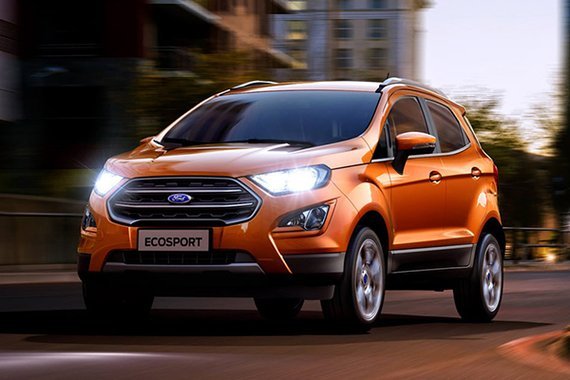 The expected look for the low and mid variants for 2021

While there will be no significant changes for the 2021 EcoSport, we can expect the addition of the new Active variant. This variant could match up design-wise against well-designed subcompact crossovers such as the new Kia Stonic and the emerging Geely Coolray. The off-road inspired Active variant is a good option for young Filipino car buyers who want a stylish vehicle that comes with affordable pricing. To conclude, it would be interesting to see how the new EcoSport shares the market with its compact crossover sibling, the Ford Territory, in 2021.

As for the pricing, well, no significant changes mean that the price will remain relatively the same. The 2021 EcoSport will still sit below the Territory with a price that ranges from Php 920,000 for the base variant to the Php 1,100,000 for the mid-level Titanium variant.

But as for the speculated Active variant, we can expect this variant to be slightly more expensive than the current top-spec EcoBoost Titanium which currently has an SRP of Php 1,190,000. The added body claddings, two-tone finish, and custom eco-leather seats all add up to the expected higher price.

<p>The Ford EcoSport belongs to the best-selling subcompact crossovers in the Philippines, which acquired its major redesign in August 2018. It is best known for its flexibility, a sleeker exterior, and a new option for its engine that can compete within the Philippine market with greater range. A floating display screen measuring 8 inches is equipped with Ford&#39;s SYNC 3, which is available in the Titanium variant. It is the most apparent feature in the cabin of the Ford EcoSport. Ford Philippines offers the Ford EcoSport is available in four trims: 1.5 Ambiente MT as the base variant, 1.5 Trend MT, 1.5 Trend AT, and the 1.0 Eco-Boost Titanium AT. The advantages of the top-of-the-line Titanium variant includes an automatic start and stop engine system and six airbags. Ford EcoSport is now offered in two engine options. Ford kept the 1.5L Inline 4-Cylinder Ti-VCT petrol power plant but with improved performance. It now produces 121 horsepower and torque power of 1150 Nm. The other engine option is the smaller 1.0L Turbocharged Eco-Boost engine. It can generate 123 horsepower and torque power of 170 Nm. Furthermore, aside from the current five-speed manual gearbox, there is a new six-speed conventional A/T as well.</p>