User's: 5.0/5
With this Ford EcoSport 2020 Philippines review you might know why it is the crossover that probably made Filipinos fall in love with the vehicle genre.

Initially released in Brazil in 2003, the second-generation EcoSport models are now widely available worldwide. Developed by the Ford Brazil Development Center, this new-gen EcoSport is based on the Ford Fiesta B2E platform, making it vastly different than the older, rounder-looking Ecosport which didn’t exactly take off to worldwide fame.

In its respective markets, however, the first-generation EcoSport actually did well - moving 700,000 units in Mexico, Venezuela, Argentina, and Brazil alone. This gave Ford the impetus to develop the new generation and to release it to a wider market.

Here in our country, the EcoSport was introduced back in 2014 by Ford Philippines and was widely acknowledged to have jump-started the popularity of the subcompact SUV segment here. So it's time to find out more about this special car via this Ford Ecosport 2020 Philippines Review with Philkotse.com!

There was a time when crossover SUVs (and crossovers in general), looked outright weird.

Case in point is the first generation of the EcoSport, joining the older versions of the Chevy Trailblazer, Hyundai Santa Fe, Honda Crosstour, and the Honda Element. Due to this and despite actually being competent vehicles some buyers were apprehensive about purchasing the unusual-looking vehicles. Owing to this, many were scrapped by their manufacturers. As mentioned, the EcoSport did well though. 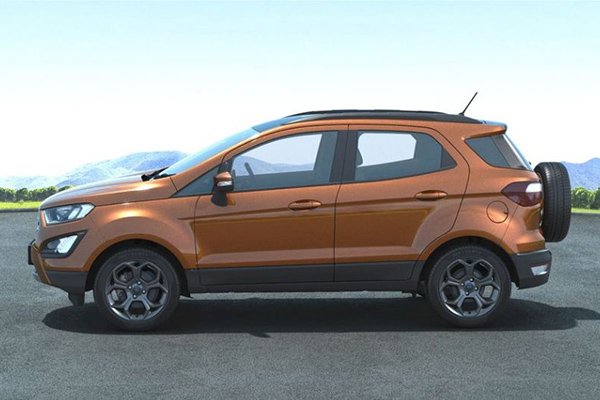 While its proportions are compact, the overall design of the Ecosport also gives an impression of heft

2020 Ford Ecosport exterior at first glance is very compact yet robust-looking. On the front is a pair of angry-looking HID lights with projectors, along with daytime running LED lights. Down below, there’s also a pair of fog lamps which are redesigned with the latest facelift of the said model. Also changed is the grille. The older Ecosport had its grille split in two but the 2020 model comes with one large, hexagonal shape. Here's that new grille we're talking about. Looks better than the old one, right?

Towards the EcoSport’s sides, one will note the crossover’s similarities to its Ford Fiesta cousin. Ford EcoSport 2020 though has higher ground clearance and a much larger wheelbase -- both perfect for running around on pothole-ridden, cracked, and uneven roads here. In comparison to the previous version, the current model has a lot of carryovers too.

As for the rear, it pretty much looks the same but there’s little to complain about that, really. The rear window is still wide and provides excellent visibility, and it opens up just right for easy cargo access. For other people though, the way it opens up to one side rather than upwards might be an issue. It’s also a bit heavy for the Ford Ecosport exterior's look. More on that later.

Some people might complain about how the rear door swings to open. You'll eventually get used to it though

2020 Ford EcoSport interior has had some obvious changes. While the shape of the dash and the center console remains quite the same, almost all of the materials used for the interior are new and better in quality. The dashboard and the elbow rest on the door and the center console are covered in soft leather, and the plastics are not clunky and cheap-looking at all.

Overall build and material quality have indeed gone up, though we still find an issue with the presence of that piano black plastic which tends to get scratched. 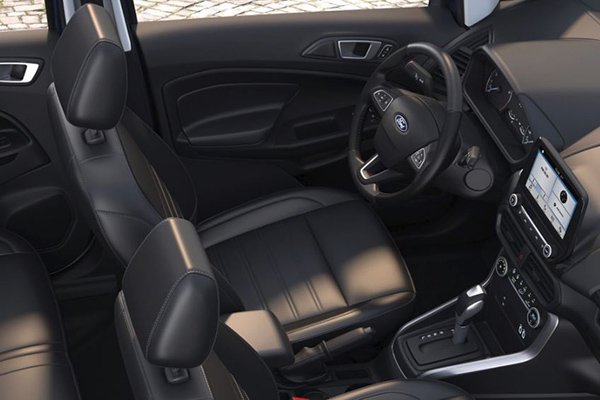 As for the room, let's get a Ford EcoSport if you are looking for a vehicle with decent space both for cargo and for passengers. It comes equipped with a nine-inch touchscreen display, 12-volt power outlets, AM/FM radio, Bluetooth connectivity, and USB integration. While the Ambiente trim does get a decent four-speaker set, the Titanium has an excellent seven-speaker ensemble. 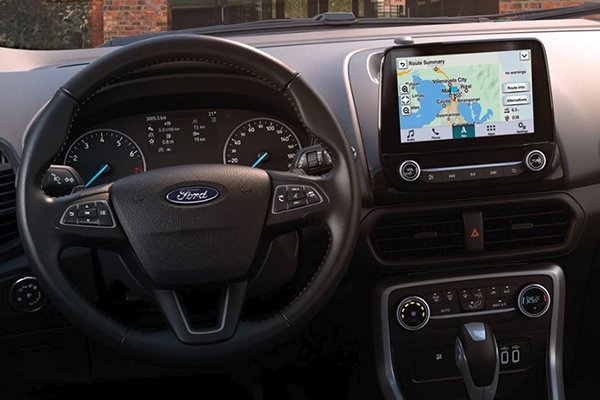 The top-of-the-line titanium gets a lot by the way of other useful stuff that we’ll talk about in the safety section of this article. 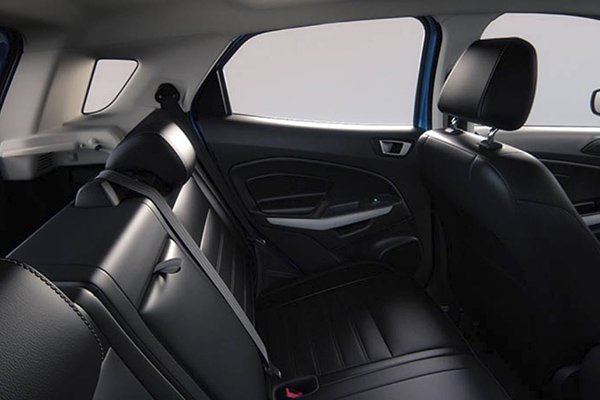 Also, the seats are comfortable and knee and headroom even for tall dudes is of no issue

Under the hood of the 2020 Ford EcoSport Trend and Ambiente variants are the 1.5-liter versions, and with the 1.0-liter Ecoboost and the new three-cylinder 1.5 for the Titanium top-of-the-line trim. Take note that this is the same engine that the Ford Fiesta has and despite its small size, it can actually give out a decent 123hp and 170Nm of torque. The 1.5-liter version, on the other hand, gives out 121hp and 150Nm of torque.

Power is sent to the front wheels either through a five-speed manual transmission or a six-speed automatic. The manual shifts rather well but, on the other hand, the automatic transmission does need a bit of cajoling to downshift.

As for fuel economy, both Ford Ecosport 2020 engines do pretty mediocre with the 1.0-liter variant mustering an average of 7.1 km/l in the city and 17 km/l on the highway. For a 1.0-liter, those numbers do not look good at all, but we think though that the problem does not lie with the engine at all but rather with the transmission. The Ford 1.0 Ecoboost Engine works great whether it's in the Fiesta or the EcoSport

>>> Related: Ford cars for sale by reliable sellers on Philkotse

For a normal person who just needs to get from Point A to Point B daily, the 2020 Ford EcoSport regardless of the trim level does its job pretty well. For some more discerning car people, however, there are some points that we really have to talk about.

The automatic variants’ transmission is not really that smooth. Starting from a standstill, the time to shift from first to third gear takes too long, and if you press on the accelerator longer than usual, the Ford Ecosport starts to lose some of its oomph. This also explains the rather low fuel efficiency for the 1.0-liter variant. Ford Ecosport makes your ride both eco-friendly and economical

Still, the engine and new tranny make a pretty decent combination. Like almost other cars in Ford's model lineup, the manufacturer did drop the dismal and sluggish PowerShift, they would do well to tweak the new, existing automatic transmission a little bit to get better performance and better gas mileage. After all, it would be such a waste to let this happen to really good engines - the 1.0 liter and 1.5 liters.

In terms of maneuverability and amount of body roll though, the Ford Ecosport 2020 is pretty decent. It is not as quick and agile as the lower-to-the-ground Ford Fiesta, but it does go exactly where you want it to. And due to its short overall length, it’s actually pretty decent in city streets. Some who have actually taken the Ecosport on mud, sand, and gravel paths also say that the vehicle can actually handle those terrains.

When it comes to 2020 Ford Ecosport's safety, the lower trim levels come with all the stuff you’d expect from a modern car. There are dual airbags at the front, child safety locks, ABS, and EBD. For the Titanium variants though, you get a whole lot more by way of a curtain airbag and hill descent control.

Overall, in this Ford Ecosport Philippines review, the 2020 edition of Ecosport is an excellent vehicle for driving around city streets. It can even handle the occasional rough road or two. While we didn’t exactly say that the automatic transmission variants are top-notch, the engine and the manual are pretty decent.

But even with the aforementioned high-revving automatic transmission, it will still do a pretty good job in getting you and your loved ones from here to there.

Also in consideration of its variant’s prices that we’ve listed above, it actually does quite well against its competitors like the Chevrolet Trax and the Nissan Juke. You can check to get more cars with the most competitive price in the Philippines in our cars for sale section. So, what do you think of the 2020 Ford Ecosport? Is the price worth it?