These days, if a product didn’t have a sporty or tough-looking equivalent of its standard variant, it feels like there’s something missing. We’ve seen it with tear-resistant clothing, shockproof wrist watches, ruggedized laptops, waterproof smartphones, and “military-grade” external disk drives.

That brings us to the Xpander Cross, the sport version of Mitsubishi’s hot-selling Xpander MPV. As far as SUV influences go, it’s actually predated by the Fuzion, whose rear-wheel-drive chassis was derived from the first-generation Montero Sport. But where the Fuzion failed to supplant the Adventure AUV as the family-slash-business vehicle of choice, the front-drive Xpander finally succeeded.

Is the Xpander Cross necessarily a more capable Xpander, or is it something the range can do without? The previous top-of-the-line Xpander GLS Sport only had front and side skirts, whereas the exterior bits on the new top-spec Xpander Cross make it sit 25mm longer and 50mm wider, at 4,500mm and 1,800mm, respectively. Those extra bits may exude a sportier aesthetic, but they also act as a pattern interrupt, making the Mitsubishi Xpander Cross look shorter and stubbier compared to the sleeker form of its standard version. The Xpander Cross exchanges the sleek silhouette for a sportier one

The Xpander Cross shares the Xpander’s 2,775mm wheelbase. Both models may be sporting the signature Dynamic Shield on the fascia, but the lower half on the Xpander Cross is angled less inward, which further emphasizes the height increase.

The upright lower half gives the impression of a battering ram as opposed to the Xpander’s wedge-like profile, anchoring the observer’s eye firmly unlike the latter’s busier-looking visage. Black serrated panels on the Xpander Cross grille are flanked by slim LED park lights. Headlamps positioned ahead of the front wheels use LEDs as well. A similarly blacked-out tailgate trim rests directly below the rear glass, surrounded by the L-shaped LED combination taillamps.

Roof rails come stock on the 2020 Xpander Cross, enabling luggage racks to be installed overhead, while the standard shark fin antenna. The 17-inch five-spoke wheels wearing Dunlop Enasave radials are a step up from the regular Xpander’s 16-inch alloy and Bridgestone Ecopia combo.

The Xpander and Xpander Cross practically share the same interior. The only noticeable change is the brown accent trim across the dashboard as well as the seats, which now come in leather material straight from the factory. Brown trim on the dashboard and leather seats is standard

Seats can be adjusted manually, with the driver’s throne also getting a height-adjust feature. Front-row leg space is very good, complementing the generous headroom and low floor. 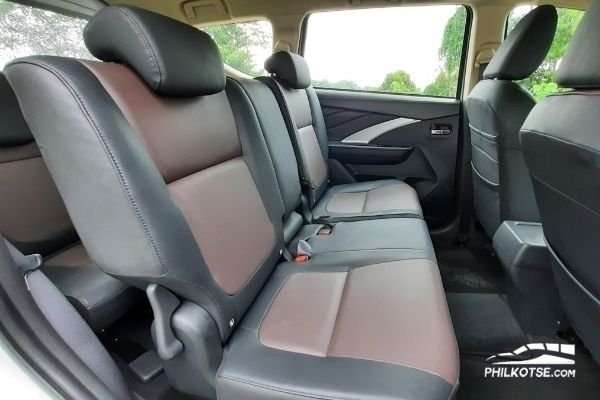 The generous width on the Xpander Cross complements its ample legroom

The leather-wrapped steering wheel with audio and cruise controls can be adjusted for both reach and rake. Three adult passengers of average build can sit comfortably abreast on the middle-row bench, which folds to provide access to the third-row.

There’s ample room behind the third-row seats for cargo, and tucking down the second and third seating rows dramatically increases interior space for bigger loads. 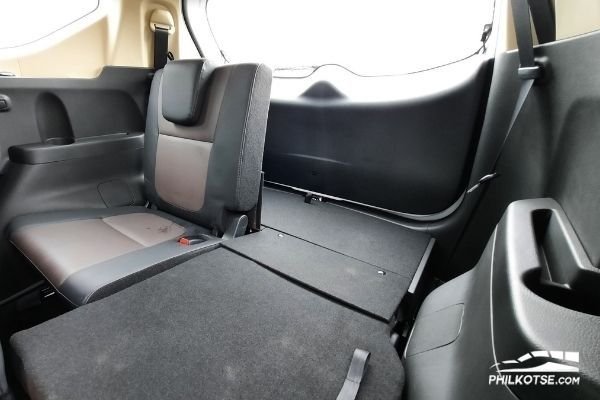 The third-row seats can be reclined or folded for cargo

There’s no shortage of storage options, from a two-tiered console bin and a shuttered compartment located north of the shift lever to a deep center box between the second-row seats, and an integrated shelf just above the glove compartment.

A pull-out tray rests beneath the front passenger seat, while more space can be found under a removable floor panel behind the third-row seats. Up to eight beverage holders can be found throughout the cabin, 10 if you count the console box. One of three 12V Xpander Cross power outlets, located inside the center bin

Power windows are standard on all doors except the tailgate, and the power-adjustable side mirrors also fold electrically. There’s no automatic climate control to speak of, but the large textured rings for the air conditioning are easy to use, and the heater function comes in handy during the typhoon months. Overhead vents for the second row have a single dial for blower control. The multi-information color display between the speedometer and tachometer gauges displays an ECO Mode that measures driving efficiency in graphical terms i.e. the number of on-screen leaves lighting up. A 7-inch touchscreen head unit handles onboard communications and entertainment, patched to a 6-speaker system with zone adjustment. Bluetooth, USB, and AUX IN connectivity are par for the course. There’s Android smartphone mirroring via the Easy Connect app, although Apple CarPlay and Android Auto would have distinguished the Xpander Cross as the premium offering in the range. Three 12V power outlets are scattered throughout the cabin, one for each row of seats. With the right charging adaptors, all seven occupants can plug in their mobile devices with room to spare for other gadgets such as a dashcam.

As the flagship of the Xpander range, however, it adds stability and traction control which do a good job of keeping the rear end in place during spirited drives on twisty roads. Hill-start assist comes in handy during uphill crawls.

Stability control is enabled by default but can be switched off

Like all modern Mitsubishis, the Xpander Cross uses a RISE body structure underneath the sheet metal. This is complemented by an impact-absorbing structure on the fascia, in the (hopefully unlikely) event of a pedestrian collision. An engine immobilizer and keyless entry are also standard.

However, glaring omissions are the lack of an alarm sound and automatic door locking on the ignition, which makes no sense since those are standard on the Mitsubishi Mirage, a model at the lower end of Mitsubishi’s pricing scale.

Push the button to get things started 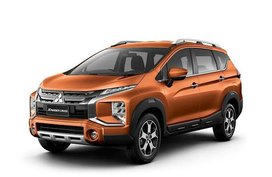 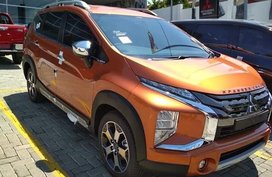 Despite being 35 kilos heavier, the Xpander Cross retains the Xpander’s 1.5L inline-4 MIVEC gasoline engine, moving the vehicle’s mass with 103 hp and 141 Nm of torque. It’s a proven power plant, however, the same mill powering the first-generation Smart Forfour, the seventh-generation Mitsubishi Lancer base trim, and the current BAIC BJ20 (albeit in turbocharged form).

There’s no all-wheel drivetrain as the power is focused on the front wheels via a 4-speed automatic, featuring a physical overdrive gear button (something no longer found in most automatics today). The 1.5L 4A91 engine has proven itself on a number of models

Power comes almost immediately when the accelerator is pressed, making the Xpander Cross sprightly across the pavement; of course, this will be a different story under full load. There’s a bit of torque steer when flooring it from a standstill, but that’s par for the course with the drivetrain.

The stiffened suspension does away with some of the squats under hard acceleration, but the Xpander Cross still endures pronounced dive during heavy braking. Electric power steering makes it fairly maneuverable, with the same 5.2m turning radius as the defunct Mitsubishi Adventure. A fifth gear would have been nice to have

Mitsubishi markets the Xpander’s shock absorbers as having been adapted from the Lancer Evolution X. The Xpander Cross takes this even further with elevated ground clearance, although front sensors would have helped with potential blind spots.

It handles somewhat rocky and gravelly roads with aplomb, and its unique platform keeps it planted when tackling corners on the pavement, at the expense of significant body roll.

Additional bolsters on the seats would have helped in this regard. At least noise isn’t that much of an issue, with the engine note only becoming bothersome from inside the cabin at 3,000rpm.

>>> Related:  3 reasons why Xpander Cross is more than just an Xpander on stilts The Xpander Cross rides higher than its rivals, which normally has an adverse effect on fuel consumption. But the lightweight frame and variable valve timing work their magic here, with instantaneous fuel consumption reaching 13 km/liter at one point. Mixed city and highway driving yielded an average of 8.2 km/liter by the time our tester needed to fill up. 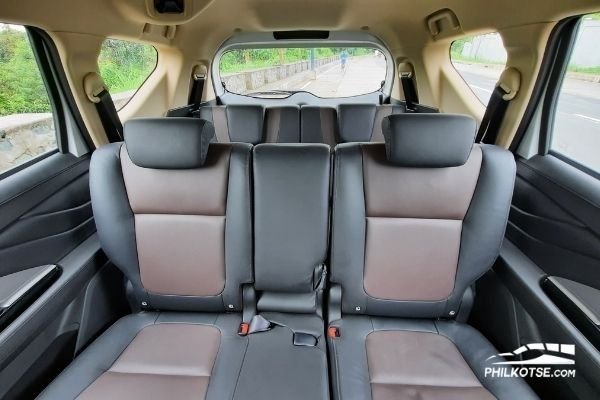 With the weight of all occupied seats, one needs to time overtaking maneuvers

The Xpander Cross offers generous space with adequate onboard tech and drives well for a family MPV, qualities that are practically identical to those offered on the regular Mitsubishi Xpander. A number of customers might balk at the Php 1,255,000 asking price, as it is already dangerously close to SUV territory. On the flip side, buyers can take some solace in the fact that the Xpander Cross is preferable to the challenges of a truck-based platform i.e. ungainly size, awkward handling, subpar fuel consumption, and expensive maintenance. Although a step up from the Xpander, the Xpander Cross is still a work in progress

In terms of addressing the shortcomings of its more urbane sibling, the Xpander Cross feels like a missed opportunity. It’s far from being a bad choice in itself, but it could certainly do with a little more authority to truly stand out as the best in the Xpander range.

Those looking for a sportily-styled and spacious yet agile people carrier will find few other options in the market that come close. But current Xpander owners chancing upon the Xpander Cross on the road don’t need to feel bad in the slightest, because they’re not really missing out on much.

Expand your knowledge of the latest automotive offerings at Philkotse.com.

1. Question: Where is the Xpander Cross made?

Answer: The Mitsubishi Xpander Cross, like the regular Xpander, is built in Indonesia.

2. Question: Does the Xpander Cross come with a diesel variant?

Answer: There is currently no diesel option on any of the Mitsubishi Xpander trims, including the Xpander Cross.

3. Question: Which models does the Xpander Cross compete against?

Answer: Some of the rivals for the Xpander Cross in the sporty 7-seat MPV category include the Toyota Rush, the Honda BR-V, and the Suzuki XL7.