Republic Act 10586 on Anti drunk driving Philippines: All you need to know

Read on the must-know thing Republic Act 10586 if you don't want to pay any peso or even under imprisonment!

Drunk driving is prohibited in all parts of the world. Each country has a law banning drunk drivers from operating and maneuvering a vehicle. In the Philippines, this law is the Republic Act No. 10586 also known as the Anti-Drunk and Drugged Driving Act of 2013. To better understand the said law, read on this article from Philkotse.com.

The RA No. 10586 was signed by the former President Benigno Aquino III on 27th of May, in 2013. The law is also known as an Act Penalizing Persons Driving Under the Influence of Alcohol, Dangerous Drugs, and Other Similar Substances.

It is a law that condemns drunk drivers and gives the law enforcers the power to fine and imprison drugged and/or drunk drivers.

The said law also enables law enforcers to use a device called breath analyzers and to conduct a sobriety test on drivers who they believe is under alcohol intoxication or dangerous drugs. They have the power to flag the suspected driver down and subject him or her to a series of sobriety tests.

If the suspected driver failed the test, he or she needs to undergo a breathalyzer test. If the driver refused to undergo these two tests, they will be penalized. Their driver's license will be confiscated and will automatically be revoked as stated in the Act. If the law enforcer has probable cause of alcohol intoxication, the Standardized Field Sobriety Test or SFTS is performed. It is a series of three tests that will determine if the driver is driving under the influence of alcohol in the Philippines.

The first test is the eye test. In this test, the apprehending officer will stand about 1 foot away from the suspected driver and checks if it shows involuntary eye jerking while they are looking towards the moving objects from side to side. This is the 2nd test where the suspected driver needs to walk heel-to-toe in a straight line for 8 to 9 steps. They should turn at the end and go back to his/her starting point without showing any signs of difficulty. This test is done to check the ability of the driver in maintaining balance and following directions. 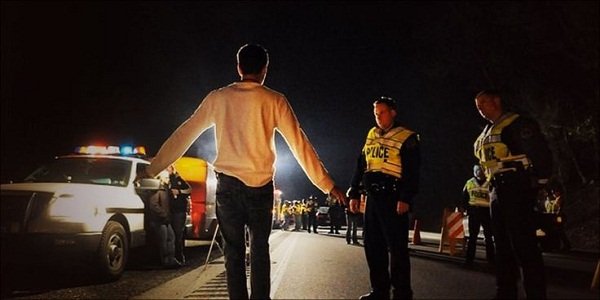 The 3rd test will require the driver to stand with their one leg 6 inches from the ground for a good thirty seconds. This test is also done to check the driver's coordination and balance and the same with the walk-and-turn test, it also checks if the driver can still follow directions. According to Jason Salvador, the LTO spokesperson, the government purchased one hundred fifty (150) breath analyzers amounting to Php 68,500 and is distributed nationwide.

With the use of breathalyzers, law enforcers will be able to detect if the motorist is driving drunk. This device should only be used if the suspected drunk driver fails the three failed sobriety test stated above.

Non-professional drivers with a blood alcohol content of over 0.05 % will be penalized and for professional drivers and motorcycle riders, 0.01%. The motorist whose subject to breathalyzer test should make sure that he/she gets to use a new disposable mouthpiece. With the use of breathalyzers, law enforcers will be able to detect if the motorist is driving drunk

Salvador reminded the motorist to always check and ensure that they will be using a new mouthpiece for hygiene purposes and eliminate the possibility of false-positive results. If the latter user is drunk, there might still be residue left making the BAC test positive.

The BAC device will print out 3 copies of the result of the blood alcohol content test, for the driver, the apprehending officer, and the last copy for the Land Transportation Office.

Additionally, Section 7 of the said law mandates all drivers involved in vehicular accidents shall undergo chemical and alcohol testing even if he or she appears to be completely sober.

>>> Worth to note: 9 best tips to avoid drunk driving that every driver must know

The anti-drunk driving law Philippines imposes hefty fines and heavy penalties. They are as follows:

The Republic Act No. 10586 also states that the Land Transportation Office shall conduct random drug tests and terminal inspections of the drivers of public utility vehicles. The LTO is the lead agency to implement the Anti-Drunk and Drugged Driving Act of 2013.

However, the Metropolitan Manila Development (MMDA), Philippine National Police (PNP), and the local government units (LGU) will also be enforcing the said law.

Abigail Valte, the Deputy Presidential Spokesperson, assured that the law enforcement officers will be trained to detect drivers that are suspected to be under alcohol intoxication.

She said that enforcement officers could stop the driver if it shows the following manifestation or indication; weaving, over speeding, sudden stops, lane straddling, poor coordination, swerving, the evident smell of alcohol in the driver's breath and/or signs of dangerous drug intoxication or violating other driving rules and regulations Philippines. 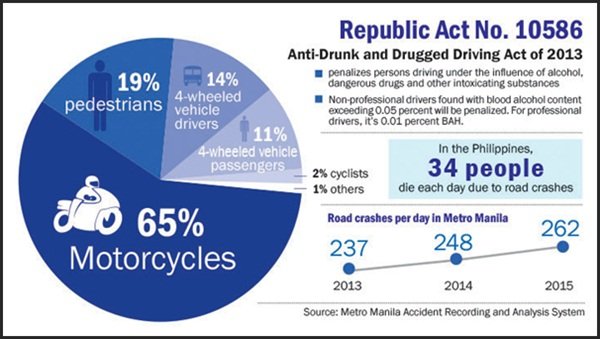 Republic Act No. 10586 aims to reduce road accidents in the Philippines

>>> Also check out: Top 5 causes of road accidents in the Philippines

Also, the anti-drunk driving law in the Philippines mandates that the driver's education course taken by drivers when getting a license or during license renewal should include teaching information on safe driving as well as the possible consequences of drunk driving Philippines.

This law is implemented to minimize the cases of accidents as shown by the MMDA data. It indicates that a large number of severe car accidents happen between 12 midnight and 6 AM. It is the most common time for drunk driving incidents.