[Philkotse guide] The relevance of aerodynamics in cars

Read to learn more about car aerodynamics and why it's crucial in car design. Yes, even for affordable econoboxes and normal everyday cars.

Aerodynamics is the study of how air interacts with a solid object -- say the wing of a plane, architecture, and, of course, cars.

In modern vehicle design, aerodynamics is a very significant factor to consider. Before we do a deep dive on that, however, let us first talk a little bit about its history.

Engineers began to observe the behavior of air on the surface of a vehicle in the 1920s, around 35 years after Karl Benz developed the first “production” vehicle. During that time, these engineers found out that drag when traveling at high speeds greatly involved the shape of an automobile. 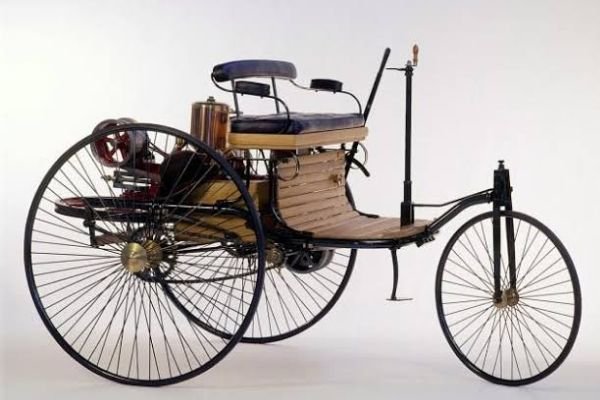 Believe it or not, this early vehicle’s aerodynamics depended largely on whether the driver had a beard or a hat

When the ‘50s came around, both British and German engineers began to analyze the effects of drag on high-speed vehicles. So, at that time, the only vehicles that benefited from the study of aerodynamics were race cars, like the 1956 Mercedes-Benz W196 and the 1954 Ferrari 374-Plus. 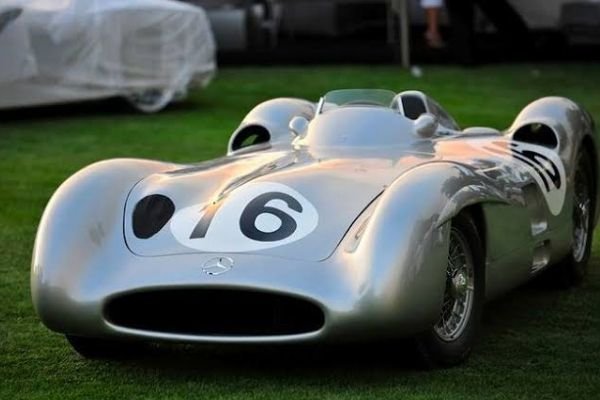 The 1956 Mercedes-Benz W196 was very aerodynamic for its era

It wasn’t until the ‘60s that automakers found that a car traveling at high speeds produces so much noise due to aerodynamic drag. This prompted changes in roadway design, and it was also around the same period when vehicle manufacturers began to shape their mass production vehicles in consideration of these factors.

>>> Check out: 10 bad car noises Filipino drivers should look out for

Now the primary goals of vehicle aerodynamics are to reduce drag, noise, and lift, as well as prevent instability while improving downforce. But what do those terms mean? 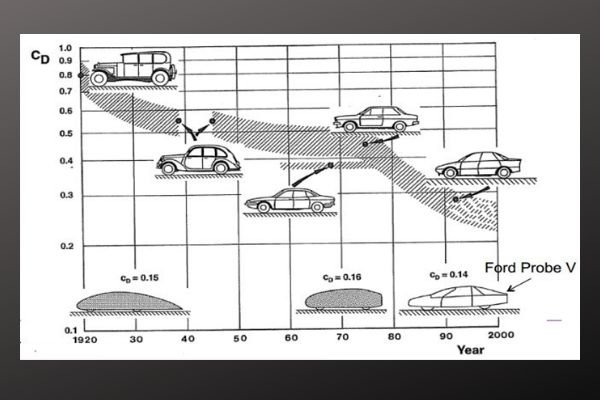 The trend in the decrease of drag-coefficient (Cd) with time

>>> You might concern: 9 aftermarket accessories & parts priced below PHP 50,000

Features of an aerodynamic vehicle

So, this begs the question: Are all modern vehicles since the ‘60s aerodynamic? To answer that, let us first consider the features of an aerodynamic vehicle.

To start off, a very aerodynamic vehicle will be very streamlined. Take, for example, the Volkswagen XL1 concept vehicle which has a very impressively low drag coefficient of only 0.31. It mainly features a buttery smooth design devoid of sharp edges, valleys, and any kind of feature that might trap air and cause turbulence. 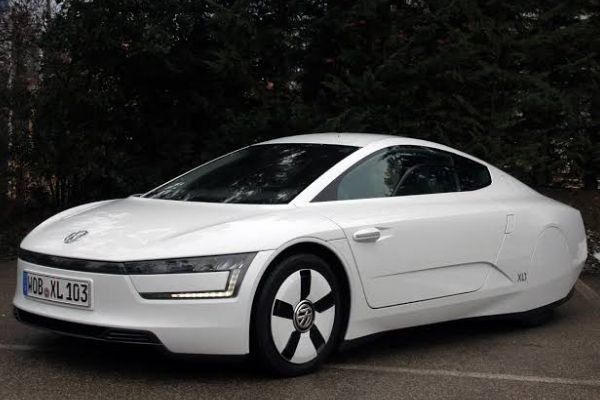 The Volkswagen XL1 concept, one of the most aerodynamic cars ever made

>>> Grab your attention: 13 less popular car features that are found in cars yet vital

Second, the very aerodynamic car has a flat bottom which improves the Venturi effect, has no sharp edges and corners on the line heading towards its roof, and it has a fastback design that reduces turbulence.

A flat and smooth floor also improves cooling by redirecting air towards the engine through a series of vents since the bottom of the engine bay is closed off. This is why driving oriented cars like the Mazda 3 has a sealed-off under chassis. Sure, it’s a pain to get access to but it’s ideal for improving aerodynamic stability. 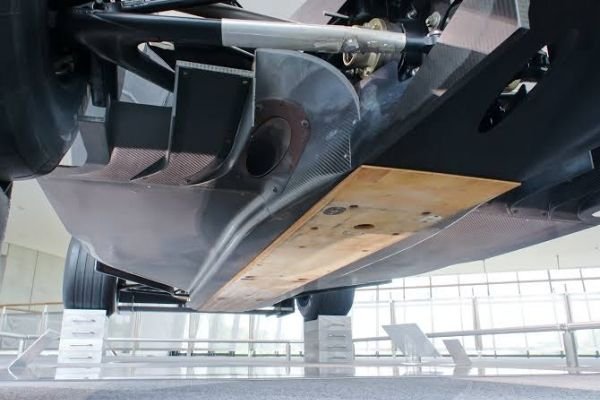 A perfect example is the typical F1 car's under-chassis

Note also that removing a car’s bottom engine cover will increase NVH. The irregular shape of the bottom of the engine and components located below a car will, after all, provide a lot of rough surfaces.

Third, the exterior features including the door handle and the car's side mirrors should be rounded. While re-directing air towards the wheel-bays can increase drag, this feature is common among high-performance cars to help cool the brakes.

Note though that installing aero aftermarket kits may reduce drag, an incorrectly installed wing or a “too large” or “too ridiculous” aero kit will only serve to increase surface area thus increasing drag.

This brings us to consider more economical and practical everyday vehicles and why some of them might or might not be very aerodynamic.

>>> Recommended article: OEM vs Aftermarket car parts: All you should know about its Pros & Cons

Local crossover examples like the MG ZS, the Toyota Rav4, the Honda CR-V, the Toyota Avanza, and Innova are designed to be comfortable, large and spacious and are NOT in the least high-performance vehicles. These examples however still have a measure of aerodynamic design to them.

This is because even these more practical cars have undergone testing in wind-tunnels in order to produce a better drag coefficient not for added downforce and the like but for better fuel efficiency. Drag, after all, will cause cars to need more fuel to travel. Other cars, especially SUVs like the on-sale Jeep Wrangler Rubicon, the Suzuki Jimny, the Mercedes-Benz G-Wagon, and even the new 2020 Land Rover Defender, maintain boxy construction as a nod to their purpose -- crawling through rocks and mud.

The Hummer H2 is also of note due it’s the hilariously bad drag coefficient of 0.57 (insert laugh track here). It is, however, a respectable nod to the military-spec Hummer it was based on and the manufacturers didn’t exactly have speed and fuel efficiency in mind. 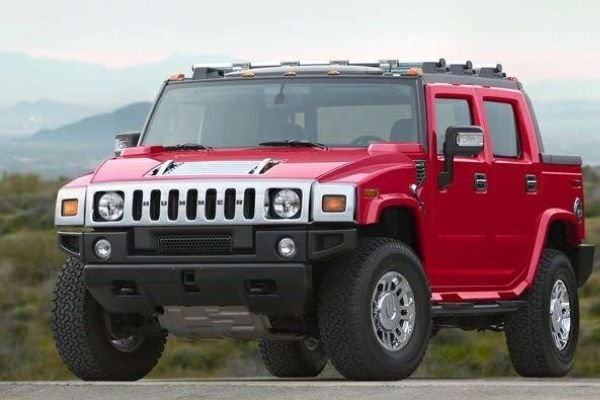 The Hummer H2 is a brick on wheels

So due to these examples mentioned above, one might argue that SUVs are not ideal for high speeds, but that isn’t simply the case.

Take, for example, the 2020 Jeep Grand Cherokee Trackhawk. It’s a midsize SUV that can make a face-melting 707 horsepower and 875 Nm of torque. It sits low to the ground and is smoother than those previous SUVs we’ve mentioned. So, it’s an actual aerodynamic SUV -- a trend that’s fast becoming popular among American car manufacturers. Ludicrous doesn't even begin to describe the Trackhawk

Another significant factor involving aerodynamics is the look of the car. Simply put, it makes a car model look better.

That, however, is very subjective because once again, there are vehicles like the G-Wagon and the Suzuki Jimny which for many folks look just fine. For most cars, especially supercars, it’s the part of the vehicle that provides much of its identity.

But let’s face it, if we designed all cars to go as fast as it can with as little drag as possible then we’d be driving a rocket-shaped thing like the Thrust SSC. Sure, it can break the speed barrier but it’s by no means practical and it definitely isn’t that pretty. 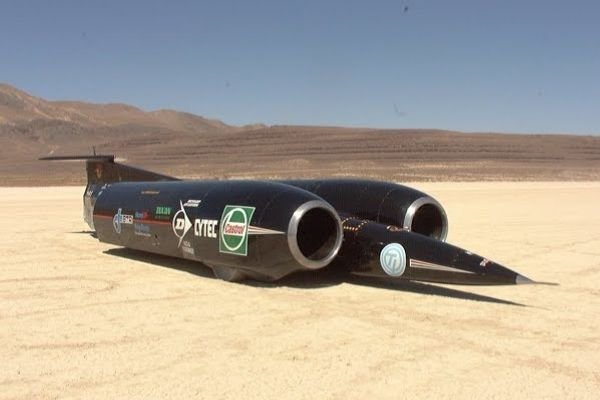 To finish, let us summarize why aerodynamics plays an important role in car design whether in a humble econobox or in a high-performance, flame-breathing supercar.

If you want to expand your knowledge and cars further than knowing how to drive, then keep reading here on Philkotse.com.