Can the Mitsubishi Xpander match the Adventure’s fuel efficiency?

Even full load won’t make it guzzle down gasoline.

As the spiritual successor to the venerable Mitsubishi Adventure AUV (Asian Utility Vehicle), the Xpander has particularly big shoes to fill.

What made the Adventure such a household name is its versatility as both personal transport and business vehicle. Fortunately, Mitsubishi’s newest multi-purpose vehicle (MPV) is proving that it’s every bit as capable in that regard.

Which 2020 Mitsubishi Xpander should you buy? – Variant Comparison

The previous light truck chassis that the Adventure used is gone; in its place is an all-new platform that gives the Mitsubishi Xpander ride comfort and handling akin to that of a sedan, albeit with an increase in ride height. Interior space is cavernous, with configurable seats able to strike a balance between passenger and cargo capacity. The Xpander is the refined version of the old Adventure AUV

As the Xpander was clearly meant to follow in the Adventure’s footsteps, there’s one consideration that buyers keep an eye on: fuel consumption.

Throughout its 20-year run, the Adventure ran on an ancient 4D56 diesel engine (the 4G63 gasoline option shared with the Galant sedan was phased out in the mid-2000s), paired with a 5-speed manual gearbox. The Adventure was popular with families due to its versatility

Despite the Adventure’s heavy frame, the diesel-and-manual combo enabled it to reach double-digit fuel economy numbers in mixed highway and city driving.

So, does the Xpander compare to the Adventure in terms of fuel efficiency?

The MPV seems to be at a disadvantage at first glance. First, it uses a 1.5L gasoline engine, which drew a fair amount of criticism for being a bit too small to haul a seven-seater vehicle. A smaller gasoline engine has to haul the Xpander's mass

Most of the range is also equipped with a 4-speed torque converter automatic, which did not help things due to its inherent inefficiency (a 5-speed manual is available on the base trim).

However, there are elements of the Xpander that mitigate this perception somewhat. The new chassis and RISE (Reinforced Impact Safety Evolution) body contribute to weight reduction, and the power steering is electrically-assisted, reducing the load on the engine.

>>> Related: Which 2020 Mitsubishi Xpander should you buy? [Philkotse Guide] 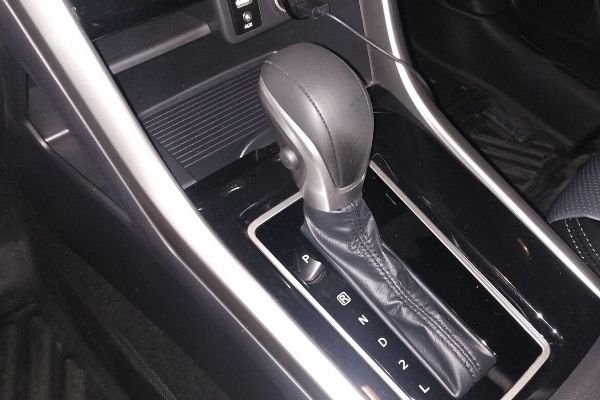 There's an overdrive button on the 4-speed automatic

The front-wheel drivetrain does away with the extra burden of a driveshaft and live rear axle. Plus, despite the smaller displacement on the Xpander’s 4A91 power plant, its Mitsubishi Innovative Valve timing Electronic Control system (MIVEC) automatically shifts cam profiles according to engine speed, balancing power and efficiency in a range of driving conditions.

A fuel efficiency run previously conducted by the Department of Energy yielded a fuel consumption of almost 23 km/liter, running an average distance of 236 kms. along the Subic-Clark-Tarlac Expressway (SCTEx) and the Tarlac-Pangasinan-La Union Expressway (TPLEx). As is the case with most vehicles, you need to give the Xpander room to stretch its legs

In real-world driving scenarios with stop-and-go traffic, that figure goes down to around 8 or 9 km/liter with two occupants on board. Driving from Antipolo to Subic for instance, with four occupants and luggage at the rear, netted an average of 16.4 km/liter, which still isn’t a bad figure overall.

From the looks of things, Mitsubishi made the right call in passing the Adventure’s torch to the Xpander.

Get more automotive insights on Philkotse.com.