This time, Mitsubishi’s MPV is making the changes more evident. When the Mitsubishi Xpander made its debut on our shores in 2018, I’d wager not a few skeptics doubted it could take the place of the old Adventure AUV. Ancient powertrain and spartan safety features aside, the latter had consistently proven its mettle both as a family ride and business workhorse.

Fortunately, the Xpander rose to the occasion, and how. It added a healthy dose of refinement through the unibody chassis, offered more interior space, and carried slightly better safety features, all in a striking visual package. The formula worked for Mitsubishi, so much so that the Xpander’s first facelift in 2020 brought minimal improvements, all of them cosmetic.

It's a different story with the second upgrade, and I’d like to think that Mitsubishi took customer feedback into consideration (at least for some of them). Full disclosure: I drive a 2019 Mitsubishi Xpander myself, so it’s natural for me to note certain areas for improvement.

An opportunity arose when Mitsubishi Motors Philippines Corporation (MMPC) allowed us to put the Xpander version 1.2 through its paces. Let’s see if the carmaker hit the right notes with my first impressions review of the 2023 Mitsubishi Xpander.

The latest Xpander still uses the same body shell as the original release. This allows it to retain the overall silhouette, right down to the prominent character line at the sides. The front and rear ends, however, are radically different. It took me a while to get used to the original Xpander’s Dynamic Shield fascia because of how busy it looked. In contrast, the facelifted Xpander was relatively easy on the eyes. I couldn’t quite figure out why, but as I was writing this piece, it hit me. The new blacked-out grille allowed my eyes to rest by serving as a pool of negative space, while the thicker chrome lines on the Dynamic Shield’s outline drew my gaze sidewards to the redesigned T-shaped LED headlamps. While thicker bumpers account for the extra length, the wheelbase remains the same

Even the foglamps farther down the front bumper are now contained within a sleeker housing. Mitsubishi relocated the license plate holder, making the grille look bigger than it actually is. But if the negative space worked on the grille, I felt it wasn’t the case with the headlamps, which dampened my enthusiasm somewhat. At the sides, the facelifted Xpander has a noticeably higher ride height, comprising an increased ground clearance (on par with the current Xpander Cross) and bigger 17-inch alloy wheels. The model’s new rear end appears much tighter visually than ever, with new T-shaped LED tail lamps accompanying a more angular apron and restyled ear bumper, which incidentally now omits the rear fog lamp. 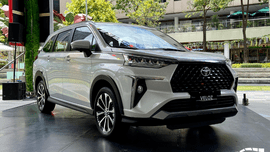 Just like the exterior, the facelifted Xpander’s cabin felt familiar and new at the same time. It still features three-row seating, coming with a new diamond pattern on the fabric material. It retains the large cargo space that the model has been renowned for, from the cubby holes in front to the rear underfloor storage. Unlike the current version, however, the latest Xpander features a restyled dashboard that’s now more elegant with the brushed aluminum trim. There are now padded surfaces too, including on the door panels. The redesigned steering wheel is beefier and sportier looking while still adjustable for reach and rake. To my slight annoyance, the folding second-row armrest now comes with cupholders. With no changes to the interior volume, headroom and legroom are still impressive

Faux carbon fiber might look pretentious (at least to me), but it would have been a better alternative to the piano black plastic on the shift console. I know many Xpander owners complaining of scratches that have accumulated on the latter material over time, resorting to aftermarket stickers to cover the damage. Alas, there’s still no vanity mirror on the driver’s side visor.

It would be safe to say that tech had a hand in contributing more space to the cockpit. This is primarily attributable to the absence of the handbrake lever, now replaced by a switch for the electronic parking brake. Even the climate controls have lost the bulging rotary knobs in favor of switches and buttons that lie flush on the panel. Padded surfaces on the dashboard are a welcome addition

There’s no more fiddling with a 12-volt power socket inside the center console, as it has been split into two USB ports at the rear of the box (one Type C and one Type A) for charging personal devices.

The 7-inch touchscreen head unit looks different, even featuring a dial below the row of physical buttons. That's because the monitor now comes standard with Apple CarPlay and Android Auto, which likely explains why the auxiliary input jack has been removed compared to the previous “iPod-ready” version (not that I mind). Power windows, power-folding side mirrors, and push engine start remain standard offerings. The facelifted Xpander finally catches up in terms of connectivity

The usual safety loadout is present on the facelifted Xpander, including dual airbags, anti-lock brakes with electronic brakeforce distribution, seven seatbelts, and a reverse camera. However, one thing I wasn’t prepared for was the presence of traction and stability control, which until now belonged exclusively to the Xpander Cross (and the GLS Sport before it).

Nothing much to write home about as far as the powertrain is concerned. The facelifted Xpander still runs on a 1.5-liter 4A91 gasoline engine, spinning the front wheels with 103 horsepower and 141 Nm of torque. Yes, that's still the torque converter automatic carried over from the current version

Anyone expecting a continuously variable transmission is bound to be disappointed, as the gearbox is the same 4-speed torque converter automatic, complete with old-school overdrive button. The car is still rev-happy and peppy to a fault, but drivers will need a light foot to get lower fuel consumption figures that a CVT would have otherwise afforded. Mitsubishi opted to build on the Xpander’s original suspension system by introducing tweaks on the new version, and it was evident on my quick drive. While the seats didn’t appear to be any more bolstered than those on my own unit, the facelifted Xpander had less body roll at turns, even with the increased ride height. There appeared to be no increase in weight over the current version, which made the feat even more impressive.

Like I said, MMPC did stumble upon a good formula for the Xpander, else it wouldn’t have sold 19,089 examples in 2019 (my personal ride included). This MPV has a more upscale vibe now

I wouldn’t blame the automaker if it wants to duplicate that feat against its rival, and the facelifted Xpander is off to a somewhat good start. It looks and feels more upmarket now, with certain tweaks (both subtle and otherwise) giving potential owners more to look forward to, while giving current ones more reasons to feel envious.

The changes are reflected in the pricing of course, with the base GLX manual retailing for Php 1,030,000, reaching Php 1,160,000 for the range-topping GLS automatic; that’s a premium of up to Php 32,000 over the current version. Considering what it brings (and despite what it still lacks), I’m quite confident that the 2023 Mitsubishi Xpander will remain a force to reckon with in the compact MPV segment.

ALTERNATIVE REVIEWS TO THE 2022 Mitsubishi Xpander