Toyota introduces the new facelifted 2021 Toyota Innova in Indonesia, and this update comes five years after the release of the 2nd-gen Innova in 2015. At first glance, the exterior changes of the new Innova bear a similar direction in styling with the facelifted 2021 Toyota Hilux. The Innova, the Hilux, along with the Fortuner after all, falls under the Toyota IMV Platform. On its front end, the 2021 Innova facelift gains a trapezoidal looking grille much like the one found on its platform siblings. The said grille is surrounded by chrome, and the slats themselves are now colored in dark grey. Contrast that to the chrome-colored slats of the previous version.

For the new Innova’s rear, its pair of taillights gets surrounded by a black colored trim. The license plate holder section also gets a black finish as well. Finishing the look of the Toyota Innova is a set of new 16-inch tires.

The top-of-the-line Indonesia-spec Venturer gets an even more unique look thanks to its darkened chrome front grille. This trim also gets a set of larger two-tone 17-inch alloy wheels, as well as a roof spoiler. The lower front bumper is more visible as well thanks to its black color. This is the Indonesia-spec V Luxury variant. Note the black section of the tailgate

>>> Related: Which 2020 Toyota Innova should you buy? [Philkotse Guide]

Overall, the new 2021 Innova bears an aggressive look, even more so than its predecessor. Its dimensions however still remain identical to the previous version.

The blacked-out pieces, however, provides a great deal of sportiness, as well as a youthful feel to the new Innova. That’s something that any fan of this Toyota-made MPV will get excited for.

Inside, not much has changed. The top-variant still gets captain seats, while the mid to entry-level variants can still seat eight. The top versions for the Indonesian market are also equipped with an eight-inch touchscreen with USB, Bluetooth, and phone mirroring connectivity options.

So no, it still doesn’t have Apple CarPlay and Android Auto. The top-variant which is the V and V Luxury Indonesia-spec 2021 Innova does get a larger 9-inch head unit, but it still comes with the same connectivity options. 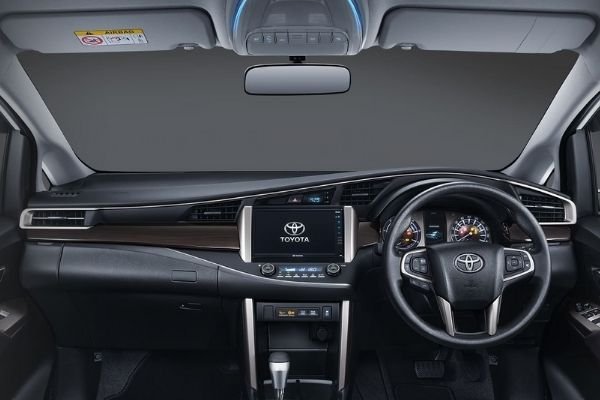 For safety, the 2021 Toyota Innova comes standard with dual-front airbags, a driver’s knee airbag, hill-start assist, anti-lock braking with electronic brake-force distribution, ISOFIX, and stability control. The Innova Venturer comes with even more safety equipment in the form of curtain airbags and side airbags.

For the Indonesian release, the facelifted 2021 Toyota Innova gets two familiar engine options. The first one is the 1TR-FE 2.0-liter gasoline engine. It can be paired with a five-speed manual or a six-speed automatic, and it can make up to 138 horsepower and 183 Nm of torque.  The 2.4-liter 2GD-FTV turbo diesel can also be paired to a manual or a six-speed automatic. On the latter, it can generate 148 horsepower and 360 Nm of torque. 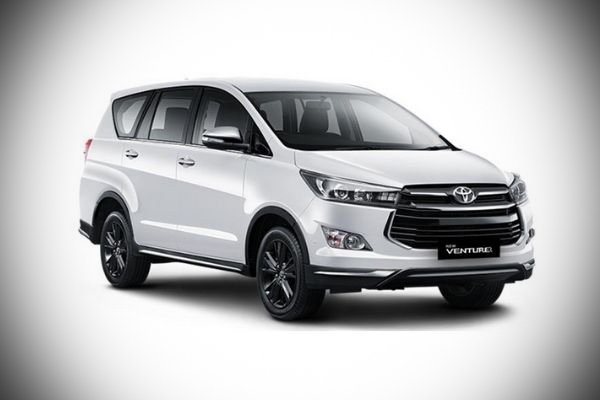 The V Luxury already looks sporty, but the 2021 Toyota Innova Venture takes it up a notch

Note that the 2.8-liter 1GD-FTV is not offered in the Indonesian market. So we don’t know if Toyota did anything to it in relation to the 2021 Toyota Innova facelift. Do remember though that the facelifted Innova will eventually make its way here to the Philippines.

The Toyota made-MPV has been a staple of Toyota Motor Philippine’s model lineup, so it’s only a matter of time for a Philippine release.