The Toyota Hilux 2018 has just received a facelift version along with three all-new variants in Australia. As expected, the new pickup will be available for sale in Q2 2018. Sharing components with the refreshed pickup revealed last November, all new models of the 2018 Hilux (Rugged X, Rugged and Rogue) will come with 4x4 styling for functionality, recovery and especially, off-road capability.

For starters, the top-of-the-line Toyota Hilux Rugged X now snatches the title away from the current range-topping SR5 in Australian market. For this trim, it is beautified by a new black honeycomb front grille with gloss-black surrounds flanked by LED headlights, a snorkel, rock rails, a load-carrying sports bar, front and rear recovery points, and many other heavy-duty details. As well as that, a winch-compatible hoopless steel bull bar and a high-tensile alloy bash plate are available, together with airbags and factory-fitted safety features. 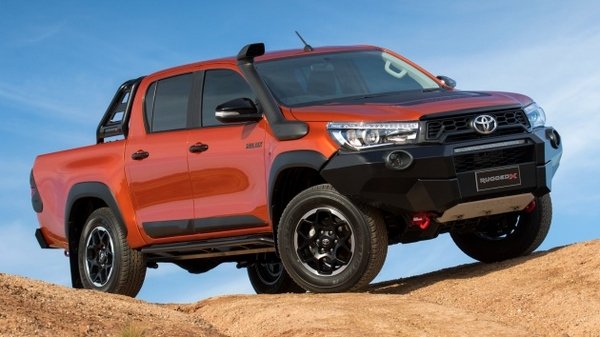 Next, concerning the Toyota Hilux Rugged, it features similar off-road appearance to the X but for heavy-duty components. Outstandingly, the trim is decked with a premium steel bull bar. Like the X, the Rugged is likewise fitted with bi-tone 6-spoke alloys; however, it only comes with halogen reflector headlights with LED daytime running lights.

Lastly, the Hilux Rogue, because of sitting behind the Rugged X, is surely less functional than the top-end trim but it’s still alluring and powerful with new front fascia adorned with gloss black grill with grey surrounds, all-black alloys, black door handles, black wing mirror caps, and black badges as well. Further, it is indulged with LED headlights and sports bar with “Rogue” badges. The Hilux Rogue is less utilitarian than the top-end trim

As claimed by Sean Hanley – Toyota Australia Vice President Sales and Marketing, those new Hilux models promise to bring the Hilux new credentials to become stronger, tougher and unbreakable. He also reveals that they all meet Toyota’s well-known vehicle standards and likewise, will be verified by the Australian Design Rules to receive full warranty coverage like other Hilux models.

>>> Click to catch more new cars and concepts in the world

<p>The Toyota Hilux is a pickup with a globally known nameplate for being one of the reliable workhorse vehicles. It was 1968 when Toyota&#39;s pickup truck started building a reputation for being rugged and dependable, and it continues until today with the facelifted model launched in 2020. This popular pickup continues to evolve and slowly move upmarket after gaining luxuries. The most significant revolutionary jump of the Hilux happened in 2004 when the seventh-generation of the model was introduced. It was the first 21st-century iteration of Toyota&#39;s pickup. It is also the first generation to ride on Toyota&rsquo;s new Innovative Multi-purpose Vehicle architecture. It provided improved safety, better ride comfort, modern D-4D diesel engines, more interior space, and a more modern aerodynamic body. The current 8th generation offers a more refined and stylish design than its predecessor, but the tradition of being a tough pickup continues. It gets a much-awaited refresh in 2020 inline. Aside from improved looks, the Philippine iteration also comes with more powerful engine options. The Toyota Hilux is available in 4x4 and 4x2 variants. In the Philippines, the pickup truck is offered with diesel engines. It is available with automatic or manual transmission depending on the variant.</p>