Since its first release in 2002, Toyota Vios has gained noticeable popularity among Filipino drivers. Till now, this Toyota subcompact sedan is considered one of the most sought after auto throughout the country for its reliable performances and reasonable price list.

Just few days ago, the all-new Toyota Vios 2018 had its ceremonial rollout celebration at one of the company’s plants in Laguna. This automaker also presented all 9 mainstream variants of the model, plus the special version in White Pearl with a variety of price tags, starting from P659,000 to P1,095,000 for 1.3 Base 5-speed manual gearbox and 1.5 G Prime continuously variable transmission respectively. Particularly, the premium version – the White Pearl costs up to P110,000 for its limited edition. Looking at the photos, we can see Vios 2018 has undergone major styling changes with squinting headlight systems, a widened trapezoidal grille and a couple of teardrop-shaped fog lamps. The interiors also get certain upgrades regarding its sleek dashboard and a redesigned steering wheel.

As for its safety features, Toyota Vios 2018 offers a set of 7 SRS airbags, ABS and EBD, stability control with brake assist for all versions. 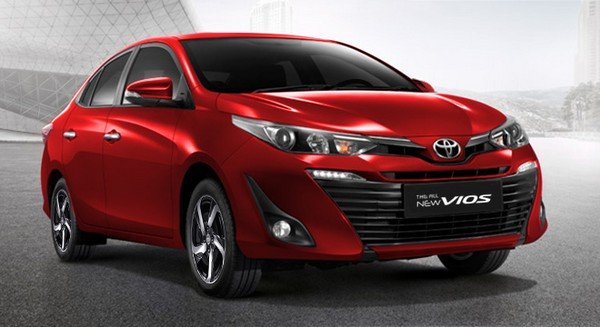 Vios 2018 has a remarkable makeover both outside and inside

Before its official launch today, Philkotse.com has managed to get some further details of its specs as below:

Don’t rush to exit the page yet, following is the Toyota Vios price list for different variants!

What do you think of this all-new model from Toyota?