The Suzuki Jimny 2019 comes as one of the most outstanding models at GIIAS 2018.

The all-new Suzuki Jimny 2019 was reported to be imported CBU from its home market. However, at the Gaikindo Indonesia International Auto Show 2018 (GIIAS), the new Jimny is said to be assembled right in Indonesia. It will be built in one of four Suzuki plants in this country.

This was disclosed by Mr. Subronto Laras - PT Indomobil Sukses International’s president commissioner at the GIIAS. And it comes with no surprising when the Suzuki Jimny 2019 has become one of the most popular models at the car event this year. The new Jimny is said to be assembled right in Indonesia

According to the latest car news, the Thailand-spec Jimny 2019 was announced to be possibly imported from Indonesia and Japan. The Sierra version will be built in Indonesia with large over-fenders, bolder bumpers and a 1.5L powertrain which works in a conjunction with a 4-speed automatic or a 5-speed manual transmission.

However, it hasn’t been decided which Indonesian-built Jimny will be produce yet - a 4x4 or 4x2? The company is still seeking a competitive price for its heated-up Suzuki Jimny 2019 while the all-wheel-drive variant will be obviously more expensive. The Sierra version will be built in Indonesia

It can be said that the Jimny comes to life as a legend in the world of off-roading vehicles, especially with its 4x4 version. As revealed last month, the new 4th-gen Jimny still comes with part-time 4WD with low range transfer gear (4L, 4H, 2H), 3-link rigid axle suspension with coil springs, 3 angles and one ladder frame.

The all-new Suzuki Jimny 2019 comes equipped with fresh “x-member” and 2 extra cross members for better torsional rigidity and improved reinforcement. It is also added a 49-degree departure angle, 28-degree ramp breakover angle and a 37-degree approach angle, helping the Jimny to cross over obstacles without scratching the car’s underbody. 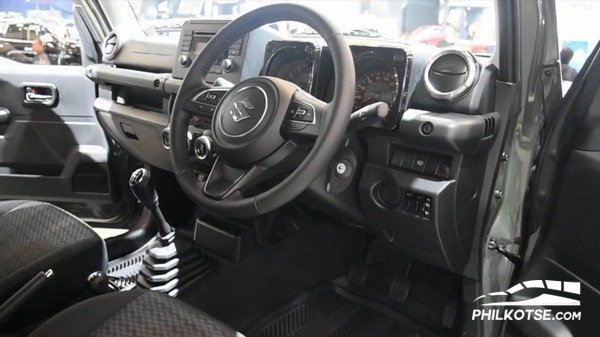 >>> Read more articles about the Suzuki Jimny 2019 on Philkotse.com: