User's: 5.0/5
Learn more about the Suzuki Jimny 2017 Philippines in terms of price, specs, interior, exterior, & more via our comprehensive review on Philkotse.com.

Among the crowded local auto market where new compact SUVs and crossovers are flooding, there is still an old soldier who has been fighting against roads less traveled for nearly five decades. It is the Suzuki Jimny. It staunchly adheres to a traditional SUV form and function despite crossovers’ prevailance. "The Jimny oozes classic 4x4 style and functionality without even trying," according to Suzuki

The third-gen Jimny had been running since 1998 as a cheap and simple off-roader. In 2001, it hit our shores and started gaining Pinoys’ affection. Since then, we haven’t seen any mechanical changes carrying over the SUV. Anyhow, it’s still pitched as one of the most capable 4WD SUVs in the market today, in both secondhand and new car markets. One of the reasons contributing to the Jimny’s fame is its ridiculously cheap price. For other reasons, keep on reading our Suzuki Jimny 2017 Philippines Review to find out. Of note, Philkotse.com will focus on the Suzuki Jimny JLX 4x4 1.3 MT.

Check out a lady's car review of her Suzuki Jimny! The brand new Suzuki Jimny has seemed to become an iconic SUV in the country with small dimensions, ultra-short overhangs, and hefty flared arches that all balance the narrow and upright body. During the last facelift, it features some added perky Jeep vibe for a hood scoop and squared-off bonnet. 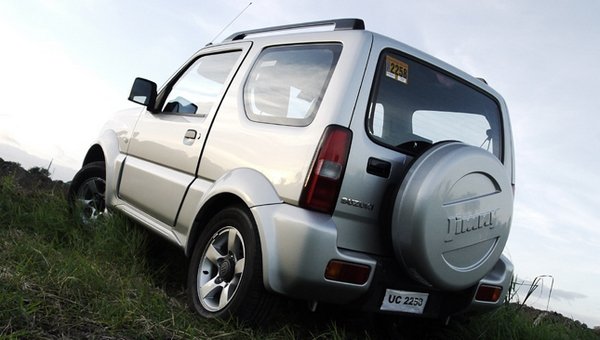 In the main, the Jimny outer is utilitarian but timeless. Besides, it looks more aggressive with off-road 5-spoke 15-inch alloy wheels and body-color side cladding. The Suzuki Jimny 2017 interior has almost remained the same for over decades. In fact, the latest iteration was carried out in 2005 covering the dashboard and controls with a new push-button 4WD. Though the steering wheel sourced from the Swift hatchback is eye-catching and nice to hold, ergonomics is not appreciated due to the absence of adjustment and upright seating position. As for space, the cabin can fit 4 not-too-tall passengers, or 2 tall ones and pieces of luggage. There are only two cup holders on the inside, but compensating for that is a raft of cubbyholes and covered bins that will let you put some cans of soda. 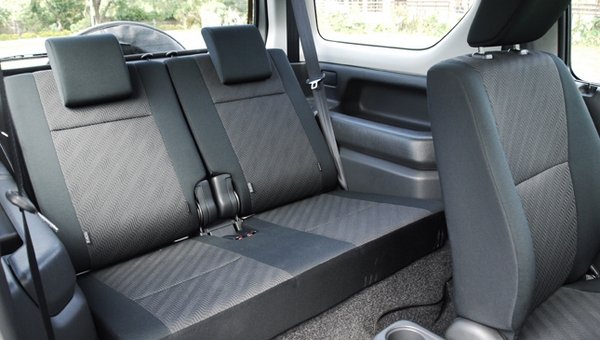 As for space, the cabin can fit 4 not-too-tall passengers, or 2 tall ones and pieces of luggage 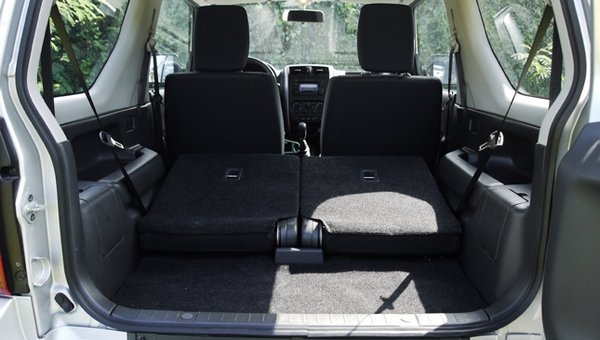 You can load more stuff with seats folded

The 2017 Suzuki Jimny comes fitted with fog lamps, keyless entry and a radio as well. This radio is an up-to-the-minute 2-DIN radio/CD unit which has been on the dash since the first launch in 2001. At the back, ISOFIX anchors are also offered.

The 2017 Jimny comes fitted with fog lamps, keyless entry and a radio as well

As an option, for those who enjoy camping, a bike rack or a roof rack will be needed. For others who are addicted to off-roading, you should consider a snorkel, a lift and a winch.

Safety in this old stager is not appreciated but it is furnished with essentials such as 3-point seat belts, defogger and side impact beams.

The Suzuki Jimny JLX 4x4 1.3 MT is armed with a 1.3L DOHC in-line 4-cylinder 16-valve engine which can give 81 hp at 5,500 rpm and 110 Nm of torque at 4,400 rpm. Power is sent to the four wheels via a 5-speed manual transmission. Owing to short gearing, this power plant revs freely and provides dynamic recital at low speeds. Meanwhile, at higher pace, it is inclined to go up against a heavy drivetrain along with brick-like aerodynamics. Theoretically, the Jimny is able to top out at 140 km/h but in the reality, it performs best at a steady speed of 80 km/h. Nonetheless, a great amount of driveline friction is caused by heavy-duty dual live axles. Not only that, they also result in poor gas mileage. In the city, the SUV guzzles 6 - 7 km/L while on the highway, the figure rates 12-14 km/L. When turning the aircon off, the fuel economy might reach 16 km/L.

The long-stroke suspension system absorbs most road imperfections whereas the crude live axle one, bigger bumps as well as washboard surfaces on highways can easily make your driving experience distressed. What’s worse, the steering is numb and heavy; even, no ABS. Thankfully, all those sins could be pardoned as long as you let the Jimny show its off-road credentials. It was born to be a brave off-roader, remember this. Light weight, good visibility, gorgeous traction and a decent suspension system are sufficient to satisfy amateur mid-pluggers. Amidst those features, the light weight may be the best since it protects the SUV from quagmire on loose surfaces and simultaneously, enables you to climb a steep embankment – a task that a heavy SUV cannot fulfill.

Suzuki Jimny 2017 Price in the Philippines

We have strengthened that the Suzuki Jimny is one of the best buys from Suzuki Philippines and in the local SUV market. If you do not believe, look at the following table:

Suzuki Jimny 2017 Specs in the Philippines

All things considered, the tiny Jimny, without a doubt, is not big and neither, not very practical. Yet, compared to many of today’s SUVs, the Jimmy still has something to offer: sophistication, comfort and affordability. Predominantly, our SUV is best-suited for Pinoy drivers who really want to take it off-road. Trust us! This tiny terror is the most affordable 4WD in the market today. 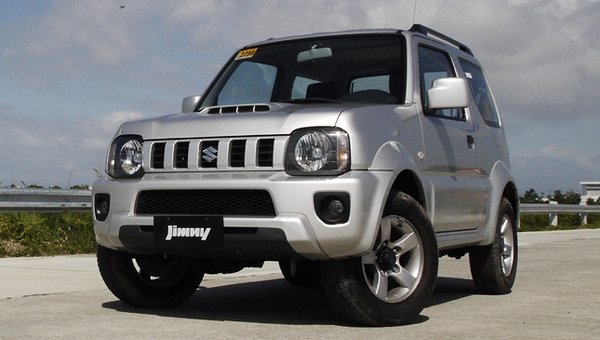 Compared to many of today’s SUVs, the Jimmy still has something to offer

At the last moment, hopefully this Suzuki Jimny 2017 Philippine Review is helpful to you. To look for more in-depth reviews about other sought-after models in the Philippines, please click here.

ALTERNATIVE REVIEWS TO THE 2022 Suzuki Jimny