Let’s compare two of the most popular crossover models available here in the Philippines.

Here in the Philippines, crossovers are continually rising in popularity. Sure, many hardcore enthusiasts are not very fond of this class of car, but the fact remains that it is the perfect bridge between sedans and SUVs.

That’s true since most crossovers do provide the tough looks of an SUV, without the size and high ride height. On top of that, crossovers are more affordable than traditional body-on-frame SUVs. After all, most crossover models have smaller engines, and lighter chassis, two elements that may also result in better fuel efficiency.

Now, two of the most popular subcompact crossovers here in the country are the Hyundai Kona, and the Suzuki Vitara. And while the Vitara marque has existed far longer than the Kona, these two are equally common on Philippine roads. Kona vs Vitara: Which crossover has the better specs? Let's find out

If you're a keen buyer who’s currently in the market for a crossover, however, you’ll of course want more information, which can lead you to your final choice. As such, we have set out to compare the Kona and the Vitara through their specifications to find out which might be better for you.

The Vitara also has more in the way of ground clearance at 185 mm, while the Kona has 170 mm. The Vitara looks tough, but its a far cry from its glorious 1st-generation version which had a ladder-frame chassis

While the Kona and the Vitara belong to the same market segment, they are vastly different when it comes to exterior styling. The Kona is a very sharp, angular looking vehicle, whereas the Vitara takes on a more retro-modern design as it actually shares some choice design elements from its earlier versions. As with any comparison, however, we’ll leave it up to you to select which one is better looking.

Do note however that the 2020 Suzuki Vitara now comes with LED headlamps as well as LED daytime running lamps. The Kona on the other hand does have LED DRLs, but it has a pair of projector halogen headlights. The Kona is definitely more rakish looking than the Vitara

Inside, both the Kona and the Vitara can seat five with their fabric clad seats which can be folded for more cargo space, and both come with a decent amount of cup holders. Other features available on these two crossovers are the following: keyless entry and a push-start button, cruise control, offline navigation, steering-wheel-mounted controls, a trip computer, accessory charging ports, power adjust and power-folding mirrors.

Do note however that there are some useful things that aren’t common between the two. The Vitara’s AC system is automatic while the Kona’s AC is manual. The Korean made crossover also has a center armrest with cup holders for the rear seats, while both have center armrests for the driver.

>>> Latest update: 2021 Hyundai Kona: Expectations and what we know so far Like many modern vehicles, the Kona's interior has a lot of hard plastics

The top-of-the-line variant of the Vitara however is relatively better when it comes to entertaining its occupants due to its massive 10-inch Android touch screen. The said unit comes with a Linux operating system, and it’s also capable of connecting via Apple CarPlay, Android Auto, and Bluetooth.

Aboard the Hyundai Kona 2020, its audio unit does have Bluetooth connectivity, as well as a six-piece speaker system just like its Japanese rival, but strangely enough, the Kona’s entertainment system isn’t a touchscreen. It does its job though, but it’s not high-tech. And lastly, the Vitara has a sunroof while the Philippine-spec Kona does not.

The Kona is also lower to the ground than the Vitara, the result of which is better stability on paved roads. Both the Kona and the Vitara have a front-wheel-drive layout, and both use a six-speed automatic.

Do note however that the Suzuki Vitara 2020 does have paddle-shifters. Both also use a MacPherson Strut for the front suspension and a torsion beam for the rear, 17-inch wheels (16-inch for the base Vitara), and disc brakes all around.

When it comes to safety features, the Kona and the Vitara both come standard with anti-lock braking with electronic brake distribution, an engine immobilizer, and stability control. The Korean crossover however comes at an advantage with its hill descent control, hill start assist, and a tire pressure monitoring system.

On the flip side, the Vitara is equipped with a pedal release system, a reverse camera with parking sensors, a freewheeling key cylinder, and a shift lock.

As for airbags, the top of the line Vitara and the Hyundai Kona are both equipped with dual front airbags, side airbags, and curtain airbags.

If you took note of the pricelist above, the Hyundai Kona is a bit more expensive than the top-of-the-line Vitara GLX. Based on the specifications we’ve discussed, it’s pretty obvious that what you’re paying for when it comes to the Kona is its powerful engine, which could mean that it's faster than the competition. Note however that the Korean made crossover has a simpler, less high-tech set of features. Note also that the Kona actually has an electric-powered version that’s also available here in the Philippines. It comes with more features and is more powerful than the regular, internal combustion-powered Kona. Being an EV though means that it deserves to be compared to something more similar. Interior space is no problem on the Vitara

That being said, the PH-market Vitara, while definitely slower than the Kona, does have some notable features that you might want especially if what you’re after is a comfortable ride. We’re talking about the automatic A/C with rear vents, and the better multimedia head unit.

Also note that while the lower ride height makes the Kona more balanced, the Vitara’s higher ride height means that it might be better on rough roads. Just don’t take the Vitara, and for that matter, the Kona full-on off-roading though because despite the tough-looking body cladding, crossovers are not body-on-frame vehicles. So to sum it up; if you care about fun driving experience, then you should highly consider the Hyundai Kona. If you want more comfort, then you might want to go for the Vitara. 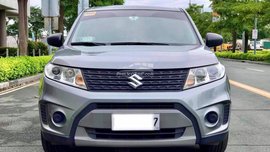