Which do you think wins in a Toyota Hilux vs Ford Ranger drag race?

Two popular trucks race out in the wilds of South Africa.

Brand rivalries in the car industry are nothing new. But in the realm of pickup trucks, this is intensified to the max. This car class after all is quite popular, and people who buy one truck model or another are known to be fiercely loyal to their respective marques. The Toyota Hilux vs the Ford Ranger [Photo Source: Cars.co.za]

Now, two of the most popular trucks in the global market are the Toyota Hilux and the Ford Ranger. And if you’ve been following market figures and social media posts about these two, then you’ll know that they’re really close rivals. But which of them do you reckon will emerge victorious in a drag race?

To answer that, the folks at cars.co.za did exactly that with South Africa’s equivalent of the Hilux Conquest 2.8 4x4 AT, which is dubbed as the Hilux Legend. On the Ford side, there’s the limited-edition Ranger Thunder. It looks different, but it shares the same mechanical bits with the locally available Ranger Wildtrak Bi-turbo 2.0 4x4 AT.

As one can see, these two truck’s torque ratings are similar to each other but the Ford has a bit more horses than the Toyota. As pointed out in the video though, the American-branded model has a bit of a disadvantage as it is a fair bit heavier than the Hilux Legend. Specifically, the Ranger Thunder weighs in at 2,220 kg, while the Hilux Legend clocks in at 2,029 kg.

On the first run, the Hilux managed to keep a significant lead. This was because the Ranger’s traction control kicked in on second gear, and thus reduced the truck’s power output. 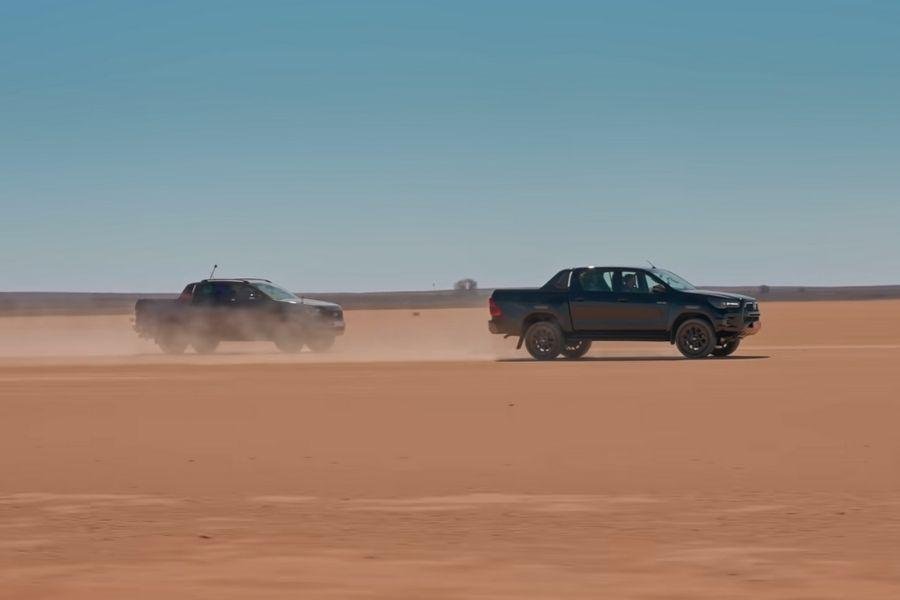 The Hilux managed to pull away from the Ford on the first run [Photo Source: Cars.co.za]

For the second race however, the Ranger used a combination of 4x4 high and sport mode. It was a close race, but the Ford managed to keep its lead. It wasn’t mentioned in the video, but we can assume that the Hilux was in 4x4 high/sport mode from the start.

So, what do you think of the race? Would the results be different if they raced on a different road surface or does this cement the Ranger as the faster truck?

For the latest car news, keep reading here on Philkotse.com.