Suzuki Jimny: A contender for the Philkotse's subcompact SUV of the year

For the end of the year, we're including a subcompact SUV of the year category and of our nominees is the 2019 Suzuki Jimny.

1. Suzuki Jimny: A contender for the subcompact SUV of the year

The design of the Suzuki Jimny 2019 shares a spot among specific cars in the present and the future. The Mercedes-Benz G Wagon, the Mazda RX7, and the Jeep Wrangler. If it isn’t obvious to you yet, they’re the kind of vehicles whose exterior look will stand the test of time.

Heck, we even think that if take a 2019 Jimny through a time machine 30 years both ways to the past and the future and people will still think that’s it’s a really great looking SUV.

A tough but cute looker that will undoubtedly turn heads where ever you are. Also, it helps that it comes in one of the most interesting color schemes in recent memory; Kinetic Yellow. Here's the Jimny in Kinetic yellow passing through a wooded, off-road area

And lastly, the 4th generation Suzuki Jimny is also fast becoming a really favored SUV when it comes to the after-market scene, be it as a show SUV, or as a full-blown off-road warrior.

As we’ve said countless of times before, the latest version of the Suzuki Jimny is like a minuscule but muscular creature than can trade punches with the largest of brutes. All of its variants 4x4, has a robust truck-like chassis, and its 130 Nm of torque can easily pull its 1,135 kg.

While the Jimny cannot haul ass say, like a typical sedan, it can cut through terrain like butter. Also, with mods to its suspension, it can certainly crawl rocks. Even in stock form, the Suzuki Jimny can go through terrain like this like a fish in the water

4. Suzuki Jimny 2019: Back to the basics but still well equipped

While the interior is really simple looking and simple feeling, it does have a lot of modern amenities like a really capable touch screen with Apple CarPlay and Android Auto, USB, Bluetooth, and an aux jack.

They even gave it a nifty looking meter cluster that’s in-line with the tough theme. And yeah, the horizontal orientation of the Jimny’s dash reminds us very much of the one aboard the Jeep Wrangler. 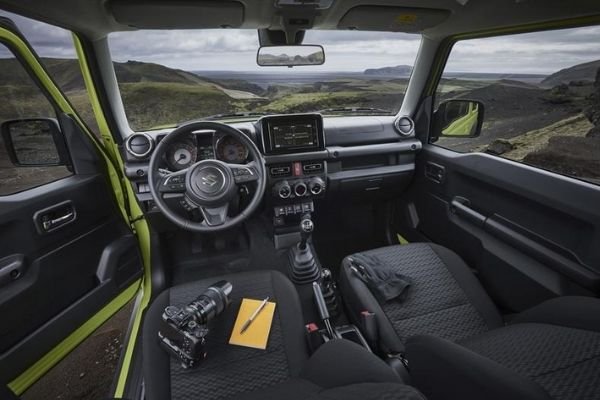 The interior of the Jimny is utilitarian but really well equipped

Stay tuned here on Philkotse.com for more car of the year contenders.