Don't worry, the event Suzuki Jimny 2019 recall in Japan does not in any way affect the Philippine variants.

As you might remember, Suzuki launched the all-new Jimny compact SUV earlier this year to the delight of a lot of people. Suzuki Philippines even had a very well-received display of the Jimny at the MIAS 2019 where mostly young people flocked to the latest iteration of the well-known Suzuki model. Cute looks and tough chops, what's not to love about the 2019 Suzuki Jimny?

The all-new Jimny’s cute looks and reliable capabilities were0 so hyped internationally and locally that even very discerning Filipina lady drivers had around 30% of the total reservations when the model was announced to be available. So all in all, it has shaped up indeed to be a best seller.

While we here in the Philippines are enjoying the Suzuki Jimny, in some other parts of the world, a recent recall was called out for the said mini SUV.

A couple of days ago, a lot of queries were made to Suzuki Philippines by concerned local 2019 Jimny owners when news of the recall had emerged. In a recent official statement, however, Suzuki PH said that the recall and the issue that had caused it does not in any way affect the Philippine variants of the 2019 Suzuki Jimny.

So in short, Suzuki Jimny units distributed here in the Philippines are not affected at all. Ironically enough though, the recall actually concerns units that are distributed for the Japanese domestic market (JDM) and we say ironically because of the fact that its highly probable that JDM Jimnys were made in Japanese based Suzuki facilities. Don't worry, the recall does not in any way affect the Philippine variants of the 2019 Suzuki Jimny

2019 Suzuki Jimny recall: So what prompted the recall exactly?

For the almost 21,248 units distributed for the Japanese Domestic Market, the recall is linked to the possibility of a leaking fuel due to a malfunctioning fuel hose.

Regarding the said fuel hose, Suzuki says that the molding on the engines of affected Jimny’s might not be able to handle the vibration and heat because the materials used for these might not be flexible enough.

While a fuel leak can be quite the annoyance, it is possible that fuel that will come in contact with a hot running engine will start a fire. So in order to address this issue, the fuel hoses of these JDM Jimnys will be replaced.

Jimnys that have this issue was reported to be made from 11/05/2018 to 12/03/2019, specifically with the serial numbers ranging from JB64W-100092 to JB64W-121516. These are the 660cc three-cylinder, turbocharged variants of the Jimny that are exclusively distributed to the Japanese domestic market. 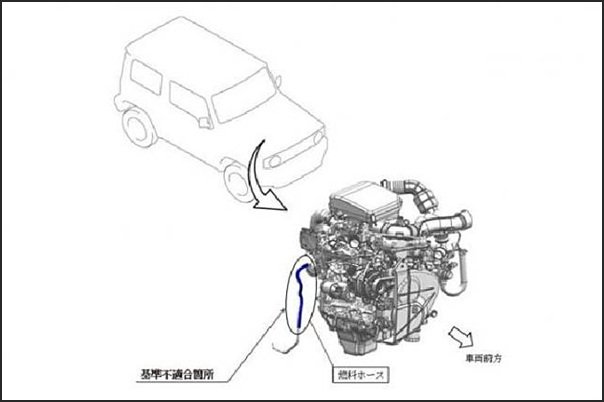 Here's the culprit itself, colored in blue

The K15B 1.5 liter inline-4 of the Philippine available variant has no fuel leak problems at all. So that being said, those of you who are considering a future purchase or current owners of the Suzuki Jimny 2019 here in the Philippines need not worry at all.

As a side note, a previous recall was also announced for the European spec 2019 Suzuki Jimny about a month ago and it concerned issues with the front differential. The said part was reported to have been fitted poorly and that it may cause the rear and front wheels to spin at vastly varying speeds.

This might cause drivetrain damage or worse yet, the vehicle would not run at all. For this recall, only 20 units of the Suzuki made mini SUV was involved.