Looking for the most suitable subcompact SUV? Then Suzuki Jimny is your answer. Why? Keep reading for more!

Arguably small are usually forgettable, but the Jimny is not! Big things come in small packages, and the Jimny is that. Get to know why this has a lot for you.

Last year there was a slew of mid-sized SUVs that invaded showroom all over the Philippine market. Now, as a pleasant surprise the Suzuki Jimny was showcased and gained critical attention from onlookers.

A long time ago, before the proliferation of sub-compact SUVs and crossovers. The original Jimny was in a class all its own. It was a bare basic, small off-roader that saw a gamut of off-road mods to make it an excellent four-wheel drive (4WD) vehicle.

To a certain degree, there is a cult status accorded to it by off-roaders and garages that tweaked out the suspension and everything that can be done to it.

By, today’s standards the original version is very sparse, but still has the performance of rough terrain handling. Fast forward to 2019 and the newest version has been unleashed on the motoring public.

One thing to answer is what will make anyone consider this diminutive SUV as something to buy? When Bigger options are presumed to be more “substantial”. Let’s go over the reasons to settle the question with Philkotse.com, shall we?

1. The cost of owning it is less expensive than bigger SUVs

With the popularity of owning mid-sized SUVs and similar crossovers with an increase in prices over a period of time. Here are the suggested Suzuki Jimny price Philippines. 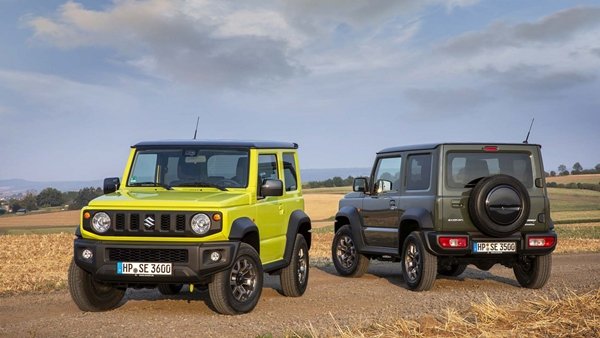 The most expensive is the GLX which comes with the premium package and features. Bigger SUVs and pickups will cost a bit more, so it’s easier on the wallet to pay for!

2. Everyone’s been waiting for a “newer” Jimny for quite a while

Nothing prepared us when the Suzuki Jimny 2019 that had its premiere mini SUV come out recently. Quite many old Jimnys still run till today and consumers are willing to buy it! With the entry of the Jimny, Ford’s Ecosport is facing a true mini-SUV with a capable 4WD gearbox. Lineup and start getting your Suzuki Jimny and maybe wait a while.

3. Smaller does not mean it performs any less!

Just because of the MU-X. Fortuner, Everest, and other mid-sized SUVs are big it doesn’t mean the subcompact Jimny is any less an SUV. Size is relative when you pack the latest 4WD gearbox with modern and updated suspension systems. Suzuki Jimny - Smaller does not mean it performs any less!

When a car is this small it means that the engine is not taxed and pull less weight. Even in the off-road country, this little beast can drive with the best of them. Just like its predecessor, small is terrible and very capable in this case!

4. The Black Bison variant is a good alternative to the stock 2019 Jimny

Not to be left behind in the face-lifting craze is the Black Bison version of the 2019 Suzuki Jimny. Some may find it similar to the Mercedes G-Wagen with body kits to change its outer appearance. Except for the bigger wheels with differently styled rims and other bits to make it look larger and intimidating to dress up your stock Jimny like a black suit.

5. Aftermarket modifications like off-road performance part and body kits will be available

Besides the Black Bison look, there might be more conversion and add-on parts, even a snorkel for deeper wading is a very definite option. Adding more body kits to create that custom look that is a nice touch. Other possibilities are diverse light mountings and even beefing up the stock suspension with dedicated off-road mods. Besides the Black Bison look, there might be more conversion and add-on parts

>>> Related: 2021 Suzuki Jimny: Expectations and what we know so far

6. Suzuki’s Jimny is next generation, so former owners of the original will like it and go for it as their Sunday car

Gen X’ers or older who drove the original Jimny are sure to be eager to drive this next generation Jimny. Surely fond memories of the past will be re-lived when riding it. Or those who never had the chance to own one will have it! Treating it as their Sunday car to get away from everything and re-live adventures or just kick back and enjoy the present!

7. There are updates to the suspension system that are more advanced!

Modern cars are the best ever, and the Jimny gets the best upgrades to its suspension with premium features. All the modern premium under chassis parts are easier to use than the older mechanical Jimny. This means that driving in city roads or the badlands is a breeze because of an advanced ECU and efficient 4WD drivetrain. Modern cars are the best ever, and the Jimny gets the best upgrades to its suspension with premium features

8. Safety features of the new Jimny is better than the old one!

>>> Refer to our Suzuki Jimny reviews for better looks.

9. Suzuki imbued the Jimny with a modern flavor with a classic look of the 1998 model

The dual-tone look of the modern Jimny is a sharp contrast to the old look of the 1988 version. Most design cues of the original version are still incorporated into the 2019 version of it. We love modernized versions of our rides that was done to the Toyota FJ Cruiser as well. There are bumps and changes, but 2019 is something to behold. Compared to 2016, the Jimny has finally grown up, and it shows.

10. There is an automatic transmission Jimny, for those who don’t like the manual version

Taken for granted that 2016 never had an AT version, this has one that is perfect. With the advanced electronic gearboxes used today. Hardcore off-roaders will go MT all the way though would want an AT as an alternative. There is almost no distinction between AT and MT because of all the ECU and sensors that do most of the work. Is the Suzuki Jimny for you? Go over all these reasons then decide, if it is so. Philkotse gives it a ten over ten compared to other similar SUVs! If you do agree then consider this bumped up Jimny as a smaller yet capable alternative to humongous SUVs.