Mazda 3 2019 for the Philippine Market revealed!

The Mazda 3 and of course Mazda has enjoyed decades of success here in the Philippines. It also helps them a lot that within the country exists a huge following when it comes to Mazda cars. One might even be tempted to say; a fandom.

It is exactly because of that that many are excited to learn that Mazda Philippines has just revealed the all-new 4th generation Mazda 3 2019, yes the one with the equally new SKYACTIV-X. If we go by that recent event, we could say definitely say that the new Mazda 3’s impending arrival might come soon.

But Mazda fans, let’s sit a while first, relax and take a look back at what has transpired so far in terms of the 4th generation Mazda 3. First debuting in at the Los Angeles auto show back in 2018, the Mazda 3 hatchback and sedan follows the Kodo style of design which means “less is more” and is currently one of the most recognizable brand identities in Japan and as of recently, the Philippines.

This is so because all Mazda cars including the 4th generation Mazda 3 2019 follow a free-flowing form that doesn’t use many edges at all. What the design does instead is to play around with shadows and light from the smooth and deliberately designed surface of the car.

It is a design meant to evoke a certain kind of emotion; a serene sense of mobility one may get from observing an expert riding on his or her horse; a person being one with the ride. Further following the principle of “less is more” one may notice that the 2019 Mazda 3 doesn’t have fog lights, has only a single character line running across the sides of the car, and it also utilizes less chromed parts inside and out.

What the new Mazda 3 used in abundance though, is the contrasting effect that comes from red, orange and black, all visible within the plush interior to the sporty yet elegant overall design of the exterior. 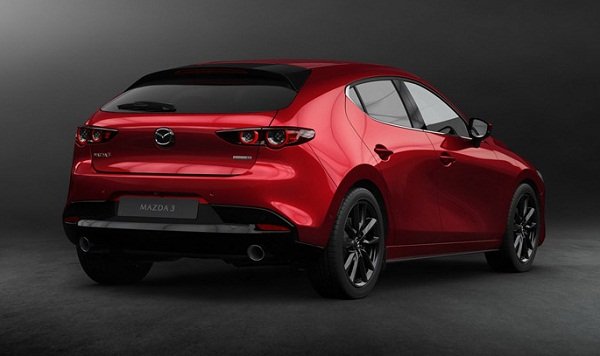 Whichever angle you view it from, the new Mazda 3 will always catch your eye

Aside from mere looks, the 4th generation Mazda 3 2019 also features technologies which make it a veritable car of the current era. For added safety, Mazda has debuted their Cruising and Traffic Support or CTS system which allows the new Mazda 3 to detect other cars in close proximity’ something like a stop and go cruise control. Some even say that the system is somewhat akin to that of an autonomous driving system.

With regards to the global market, the Mazda 3 will come with five engines both old and new. What caught everyone’s attention though is the new SKYACTIV-X engine which is the world’s first gasoline engine that uses compression.

So in short like a diesel engine. The SKYACTIV-X, unlike diesel engines, will still use spark plugs albeit merely to control the said engine’s compression. The new Skyactiv-X in all its glory

The engine in question will be able to make as much as a 188 horsepower which is about the same amount as the currently available SKYACTIV-G 2.5 liter engine despite using less gas.

As for the transmission, the new 2019 Mazda 3 will both use the SKYACTIV-MT and the SKYACTIV-Drive automatic. Older yet equally reliable Mazda engines will still be made available for the new Mazda 3. According to the lastest car news, the exact date of release for the new 4th generation Mazda 3 2019 may come in-between April of the current year March 2020. Regarding the price tag, Mazda Philippines is yet to announce exact information regarding the matter.