Back in 2004, there was one car that was the absolute "fetchness". It came in barrelling through the crop of cars at the time and while most of them were still shedding their 90s flannel and jeans, Mazda theirs out altogether to introduce everyone into the 20th century.

The Mazda 3 flew its Zoom-Zoom marketing banner and did awesome powerslides around the competition. It is currently in its 4th Generation but let’s take a step back into memory lane a bit and we find a car that has aged like a fine wine. In fact, if it were released today, I would say that it can still go toe to toe with the best of them. Does the first generation Mazda 3 still have what it takes in the second-hand market?

The Mazda 3 was first released in Japan in late 2003 where it was called the Mazda Axela. It replaced the long-running Mazda Familia line. You might know the Mazda Familia as the Mazda 323. In the Philippines, the motoring public just went ga-ga over the new car.

It looked so distinct from the pack with its sporty styling and impeccable fit and finish. It shared the same platform as the Ford Focus, which gives it a unique Euro flare as well as fit and finish. Until this day whenever a clean specimen drives up, spectators give it the same reverence as it had almost more than 15 years ago. In this new feature from Philkotse.com, we’ll be looking at it in as we see it in the present. Comparisons to its contemporaries will be unavoidable but we are still going to find out how it stacks up to the current line-up of cars. Does it still give you the same feeling when you drive it or turn enough necks to earn it its street cred? Let's check out Mazda 3 1.6V 2007 Philippines Review.

Here is where the first generation Mazda 3 makes every penny worth it. As I said earlier, the styling of Mazda 3 2007 originally was so distinct at the time that many saw it as THE ultimate “pogi” car. Mind you, the local car scene was still being dominated by the likes of the ninth generation Toyota Corolla, locally known as the Corolla Altis and the seventh generation Civic.

Their models have introduced 2 years ahead of the Mazda 3 in the Philippines but already they were showing their age. Maybe it was because they still cling to their 90s heydays. A year earlier, Mazda launched its Zoom-Zoom marketing campaign, promising its fans all-new and exciting cars. Everyone got super excited about the Mazda 3 and why wouldn’t they. It’s character lines and proportions resemble that of Mazda’s top-dog model at the time, the Rotary-engine powered Mazda RX-8.

Right from the headlamps, sharp side profile, and rear tail lights. This 2007 version has some extra bits installed by the owner, however. He asked if the body kit for the top of the line Mazda 3 2.0R could be applied to this 1.6V. The dealership gladly obliged as it was kitted up with factory body kits such as side skirts and a rear duck-tail spoiler.

>>> Click here to find the best Mazda cars for sale. The 2007 model was also improved somewhat with partially smoked head-lamps and tail lights. The 16-inch mag wheels were also a win as it gives the Mazda 3 a more aggressive stance than its competitors. This car is one of the rare models wherein if you park it besides more modern cars, it would not look out of place.

>>> Check out for Mazda 3 reviews by Philkotse's experts.

If there is any feature that sets it lightyears ahead of everything else at the time is the 2007 Mazda 3 interior. While Toyota’s top of the line model emphasizes the use of wood and chrome, while Honda gave the Civic the bare-bones treatment, the Mazda 3 really felt like a sportier car with great fit and finish to rival those of European origin. 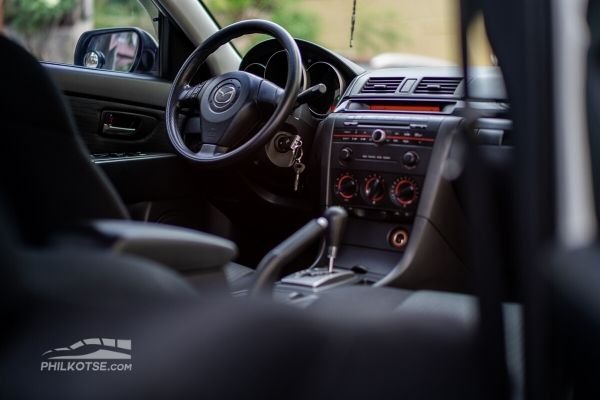 The interior has real Euro Flair

The first thing to greet you is those white-faced gauges with red needle indicators. The chunky and confidence-inspiring steering look as if it was taken out of the Mazda RX-8 parts bin. The dashboard, although devoid of any soft-touch materials are all well laid out.

The dashboard features an interesting pattern across it culminating in the middle section where the entertainment system and air conditioning system seem to flow down like a waterfall, leading to the beautiful machined shifter that controls the 4-speed automatic. 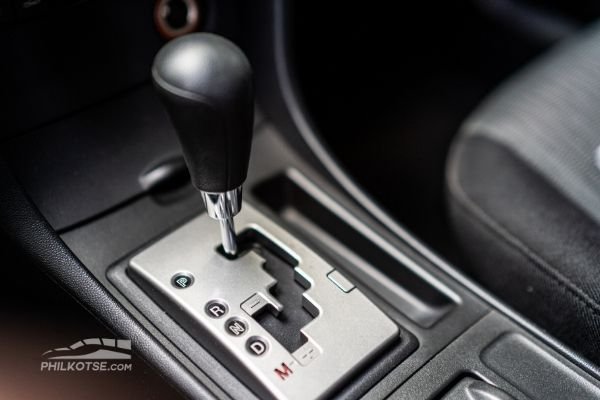 The beautiful shift knob is leather-based and good to touch

Sitting in the driver’s seat, a comfortable yet supportive seat awaits. It is properly bolstered to keep you in place while driving spiritedly. The multi-level center console is spacious enough to fit all your small items and provides you a nicely padded arm-rest especially during our horrible traffic. 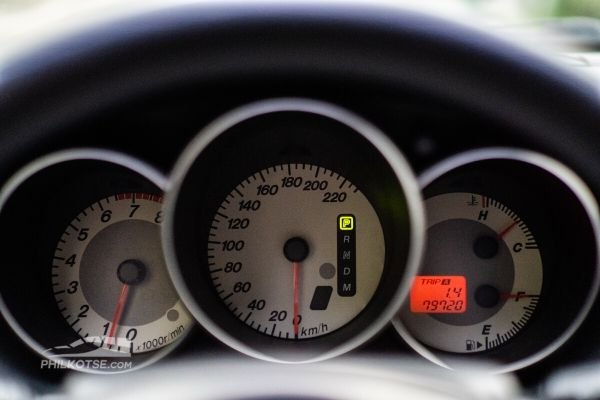 The rear seats are also capable of fitting three people abreast. I myself can sit in relative comfort even behind the driver’s seat with my seating position in place. The headroom is adequate for my 5’ 10” ½ height. Long drives and traffic are a breeze as lumbar support is excellent. On paper, the Mazda 3 seems to be running a bit thin as compared to the Honda Civic and Toyota Corolla Altis of its time but all my fears were alleviated as soon as I sat inside and just drove it. The car did not feel like a 10-year-old car. Throttle response was on point and the transmission, when left at “D”, was very willing to downshift and speed away when necessary.

The reason behind this is that it doesn’t yet subscribe to drive-by-wire technology. The throttle body is connected to the accelerator via a cable operated manual throttle body. There is virtually no lag as your pedal action does not have to be processed by a computer. Just run and gun. If you want to grow your own boat, the Mazda 3 really shines in this category. It was amazing, I’ve driven my share of automatic cars in my life but this one switched to manual mode. Actually feels like a real manual. The revs are willing to stick to the red line the electronic nannies took a break when this car takes over. 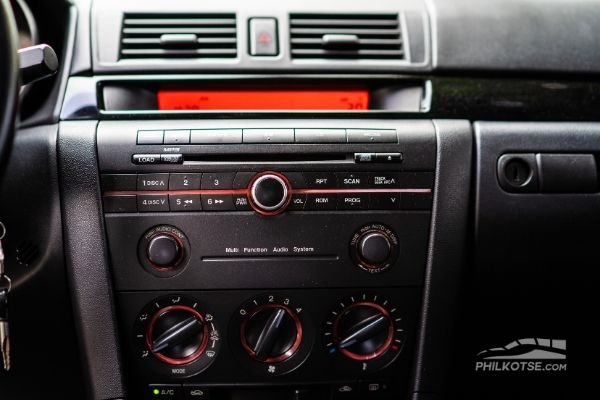 The Center console still has a 6 disc changer

The ride is supple and NVH levels are kept really low thanks to the fact that Mazda went to great lengths just to deaden the sound from the outside world, you can’t even barely hear the engine from the inside but you do feel that it is there. Suspension characteristics also play a great part in its overall driving dynamics.

It wears front independent McPherson Struts and an independent multi-link rear suspension from Ford. The steering is precise and once again, on point. Thanks to precise steering and suspension parameters, this car feels so much like a go-kart. Attacking the corners is so fun with the Mazda 3

>>> Find your next sedan for sale at the best price 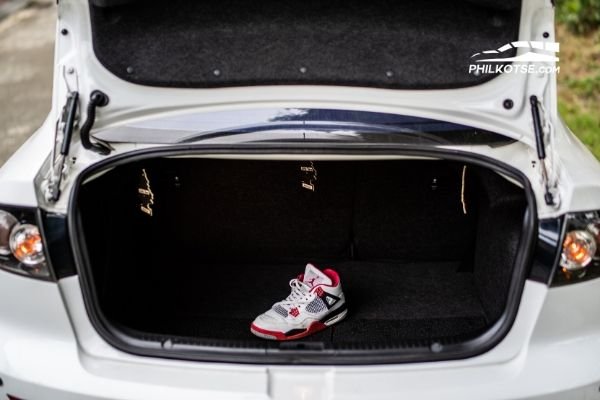 The rear cargo might not fir everything but it fits these

It’s not all roses and daisies, however. Whether it's because of the sound insulation, solid car structure or relatively weak engine, it has a hard time lugging around the weight of the car, it wasn’t slow though, mind you. It just feels like it could need a bit of power, especially in the low end. You have to push the engine hard to feel it.

That probably caused the less than stellar fuel economy we got from the Mazda 3, we pegged in between 6-7 km/l heavy gridlock traffic and about 11 km/l on the highway. I can’t blame everything on the car though as most of the time I never thought of saving fuel. I just wanted it to go fast and I was a little bit too eager to have it start running.

2007 Mazda 3 1.6V holds up really well when it comes to performance, looks and interior amenities. There are a few things you do have to check before you take the plunge and grab one from Cars for sale section. Make sure that the previous owner never modified the engine or suspension in any way.

Mazda prides itself on the balanced engineering they give their Mazdas and Mazda 3 is best left unspoiled in that regard. As long as you keep your Mazda 3 well maintained and taken care of, in spite of all the quirk. It still is one of the better-used cars you can get. You can't find a bad angle for the Mazda 3

The owner of the car would like to thanks C J Automotive Parts Service for helping us to produce this Mazda 3 2007 Philippines review. If you want to gain some advice from them, they are located in 1419 Vito Cruz Extension, San Antonio Village, Makati City. They are on Facebook but you can contact them at (02) 896 4152.