The all-new Mazda 3 2019 is expected to be available in the Philippine market next month.

Mazda has definitely stepped up their game and gears with the new Mazda 3 2019. They managed to pull out all the stops and impress everyone with their sedan and hatchback. With a new platform, a sleeker design inside and out, and eventually with a more advanced technology called Skyactiv, Mazda has undoubtedly entered a new era, and there’s no turning back for them.

With the grand reveal that happened at the 2018 LA Auto Show, the Mazda 3 sedan was seen as a beautiful promise. The Mazda 3 offered as the classic sedan is a family friendly, rational, and sensible car while the second variety which is the Hatch, considered being the car of the outgoing, wild, and free. Dubbed as Mazda’s more sophisticated and purposeful emotive car, the Mazda 3’s design will make you almost believe that it moves even when it is parked. With a team obsessed with achieving a car that is uniquely beautiful, the goal of having the consumers fall in love with this beauty has been a complete success. As per Julian Montousse, Mazda Design Americas’ Senior Director shared, “It’s like ‘Art in Motion’ even at a standstill. It is designed to intrigue and cause the driver to instinctively fall in love with it.” This was easily achieved and nailed to the very core.

The Mazda 3 is beautiful but it also boasts world-class features that will make you want it more. Getting this car is like the beginning of a love story. This 2019 model have restructured the seats and the location of the controls. It gives the driver that natural position and balance to enhance that overall driving experience. 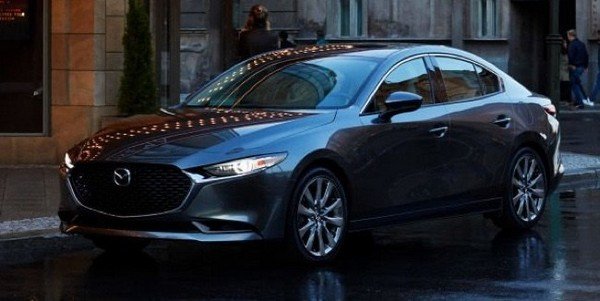 Dubbed as Mazda’s more sophisticated and purposeful emotive car, the Mazda 3’s design will make you almost believe that it moves even when it is parked

The dashboard gives the driver an escalated feeling of confidence because it is designed to be symmetrical to the driver. As passengers, this might be a catch, but it scores impressive cookie points to the person behind the wheel. Aside from the level of confidence, the car’s features also enhance the overall control and power of the driver. 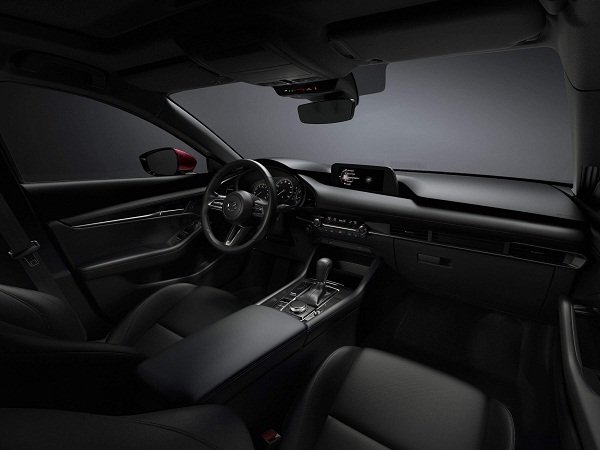 Unlike most compact competitors, the Mazda 3 is also an All-Wheel Drive and teaming it up with Mazda’s renowned G-Vectoring Control Plus and the predictive i-ACTIV AWD, conquering any road conditions is as easy as pie. As long as the driver wills and controls it, the car will always deliver anytime, anywhere. This car has undoubtedly set new standards for compact segments.

Noticeably with this beauty is that it is slightly longer and lower than the previous models with its wheelbase stretched to an inch. It also has a more economical and compact torsion beam setup that overall impacts the car’s quietness. With a striking resemblance to the Kai concept of last year, this Mazda 3 still sports the prominent grille and the headlights that appear to be frowning. The teardrop windows at the back as well as the roofline that is swept back then sexily slopes into the boot add to that beautiful, dramatic look. The smartly creased front end with thinner headlight and chunky C-pillar gives it a more upscale and premium character. 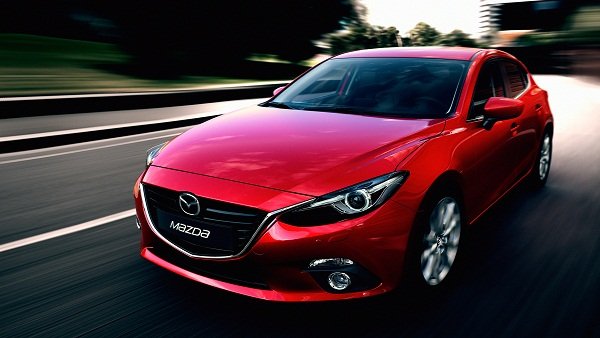 Inside, the almost full-width infotainment screen can almost compete with the Audi A3 and the Mercedes A-Class. The extensive system coupled with the soft touch buttons definitely complements the metal trim streaks of the interior of the cabin. The materials used were upgraded as well too with a stitched dash pad and a new design for the steering wheel. On the hatchback model, the leather upholstery is set to a bold, sexy dark red and a Bose audio system is included in the upgrade. 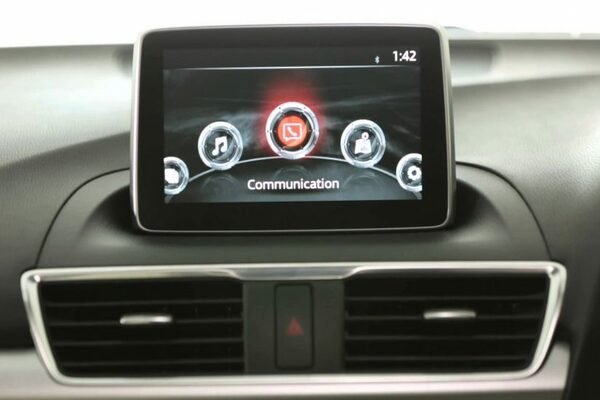 Inside, the almost full-width infotainment screen can almost compete with the Audi A3 and the Mercedes A-Class

The SkyActiv petrol engine is one of the beauty marks of this car. Thanks to Mazda’s Spark Controlled Compression Ignition (SCCI), it gives diesel-like fuel economy which is a huge advantage. It enables that spark plugs to operate like the traditional petrol engine that burns the fuel, or it can ask the engine to seamlessly switch over to a diesel method of compression where the pressure is needed to cause the fuel to burn. This adds to the overall efficiency of the car.

There are two fuel Skyactiv-G gasoline engine options for the Mazda 3. The first one is a 1.6-liter inline-4 mill which has a 110hp and 144Nm torque power. The second option is a 2.0-liter inline-4 lump that can powerfully pump 155hp and 200Nm of torque. The bigger motor is loaded with an i-Stop system and an i-ELOOP which is a regenerative brake system that can provide power to the car’s electrical mechanisms. Both power plants work hand in hand with a 6-speed automatic transmission.

This new technology coupled with the trusted 187 hp and 230nm of torque means that supercharged 2.00-liter engine is as efficient as a diesel but more environmentally friendly because of the absence of soot emissions. According to the latest car news, the new Mazda 3 2019 is set to be available in the market next month and comparing it to its predecessor, the sedan with a six-speed automatic transmission has a base that is relatively higher. In the Philippines, the tentative price list is as follows:

Mazda has surely aced the idea of ensuring that each and every detail of this new baby evokes a profound human and relatable emotion where the value of the car cannot be measured but can only be experienced. Now considered as Mazda’s North Star, the all-new Mazda 3 is undoubtedly a loved one to keep.