It's about time for the current Juke to be replaced. But which one?

Both the Nissan Juke and Nissan Kicks subcompact crossover SUVs have been around for quite some time, although only the first-generation Juke arrived on our shores; its looks have been polarizing, to say the least, with feedback ranging from “quirky” to “downright hideous.” >>> Latest update: 2021 Nissan Juke: Expectations and what we know so far

It then comes as a pleasant surprise that the second-generation Juke now has a relatively more conventional-looking appearance; the funky reptilian façade gives way to a sleeker fascia that’s less eccentric and more consistent with Nissan’s corporate face.

Meanwhile, the less radical-looking Kicks debuted its first generation in 2016 under the P15 platform, replacing the Juke in the U.S. and Canadian markets two years later.

Just recently, Nissan held the Thai launch of the hybrid version called the Kicks e-Power, its first electrified model to debut in Southeast Asia. Thailand will also be the launchpad of e-Power in the ASEAN region and will be the manufacturing hub for the Kicks e-Power for the market. It goes without saying that the current Juke here in the Philippines is in dire need of an update (and really, it’s just about time). But with the revamped Juke and new Kicks e-Power on the horizon, which between the two should Nissan Philippines, Inc. (NPI) bring here?

Let’s have a quick comparison.

The Kicks e-Power is longer by 85mm, but is otherwise 40 mm narrower, and 5 mm shorter, apart from having a wheelbase whittled down by 26mm. The Kicks e-Power also has a marginally higher ground clearance of 177mm, compared to 170mm on the Nissan Juke. The new Nissan Juke retains the C-pillar mounted handles at the rear doors, in contrast to the normal position on the Kicks e-Power. We’re not sure what purpose the hidden door handles serve apart from novelty, and it could even be a potential source of annoyance for older drivers.

Roof rails were never an issue on the first Juke, simply because it didn’t have any, and the new model continues to omit the feature.

Meanwhile, the Kicks e-Power retains the roof rails from the standard version which add sportiness to the crossover’s silhouette, apart from providing an opportunity for carrying more cargo. The Kicks e-Power has a more angular aesthetic

The Juke rides on a set of 19-inch alloys that enhance grip and handling, while the 17-inch wheels on the Kicks might conceivably yield a better ride.

Inside, the Juke offers a reworked interior for those complaining about the original’s subpar build quality. Soft-touch materials are now the norm, and the odd-looking steering wheel has been replaced by a sportier, flat-bottomed tiller. The new Juke has a sportier-looking interior

The floating-type 8-inch touchscreen head unit is an improvement over the in-dash version, now sitting higher on the dashboard and closer to the driver’s line of sight, while the similarly-sized head unit on the Kicks e-Power remains recessed within the dashboard. 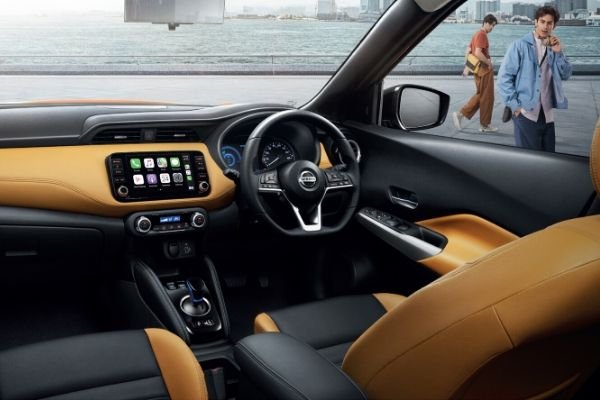 A cleaner layout is used in the Kicks e-Power's cabin

Both offer smartphone mirroring, with the Juke having built-in Google Assist and the Kicks e-Power supporting Nissan Connect and Nissan Intelligent Integration.

>>> Related: Are there possibilities for us to see the Nissan Kicks in ASEAN soon?

Under the engine bay, a turbocharged 1.0L 3-cylinder gasoline engine powers the Juke, good for 115 hp and 200 Nm of torque. Connecting it to the front wheels is a choice of either a 6-speed manual or a 7-speed DCT. Meanwhile, the Kicks e-Power is propelled by a 1.2L DOHC 3-cylinder engine, working with an EM57 electric motor, generator, and inverter.

The result is an output of 127 hp and 260 Nm of torque solely from the electric motor while the combustion engine acts as a generator to recharge the 1.57 kWh lithium-ion batteries, delivered to the front wheels via a 5-speed manual or X-Tronic CVT. The Juke comes with the Nissan Intelligent Mobility suite of driver-assistive tech, especially the Nissan ProPILOT Assist which acts as an intelligent cruise control. Six airbags are standard, compared to four on the Kicks.

Both models are equipped with an Intelligent Around View Monitor for easy maneuvering in tight spaces, which is essential for the Juke’s wider turning radius of 10.7 meters rather than the Kicks e-Power's 10.4 meters.

With all these numbers and features laid out, which Nissan subcompact crossover is a more fit replacement to the current Juke? Should Nissan go for the hybrid-electric system of the KIcks or go conventional with the second-generation Juke? You be the judge.

As for NPI, we asked for a statement about this dilemma but unfortunately, the company didn't want to comment about any future product, so basically we're in the dark for now.

Keep it here on Philkotse.com for more auto industry updates.