Ford Ranger: A contender for the best pick-up truck of 2019

Updated Dec 21, 2019 | Same topic: Highlights of the Week
Despite not having the imposing look and the sport suspension of the Ranger Raptor, Ford Rangers are still capable trucks, even more so in terms of carrying weight.

Ford Ranger: A contender for the best pick-up truck of the year

Ford Ranger: Powerful and can still be used to haul a LOT of stuff

As we’ve said before, the Ford Ranger Raptor is a contender for best pick-up truck of the year cause it is equipped with a highly competent suspension system designed to take on rough roads fast. Think of those “Baja trucks,” that’s exactly what the Ranger Raptor it’s like. This is thanks to its sport suspension courtesy of fox. The Wildtrak, the XLT, and the XLS might not have sports suspension like Raptor, but they do have a pair of really strong rear leaf springs

In comparison, the Ford Ranger Wildtrak’s suspension is a simpler double wishbone w/ coil-springs at the front and beefy leaf springs at the rear. While indeed, this combination is vastly simpler, it enables the Wildtrak, the XLT, and the XLS variants to haul SIGNIFICANTLY more than the Ranger Raptor ever will. 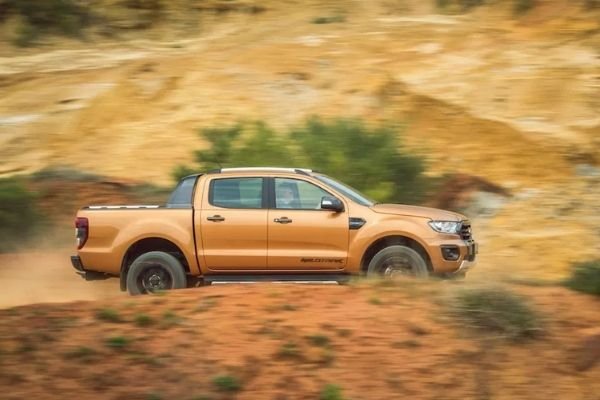 Carrying sacks of rice? No problem. Piles and piles of bananas? No Problem!

In fact, the Raptor’s payload capacity is rated only 766 kg while all of the other Rangers can carry up to 1,120 kg.

Ford Ranger: A perfect balance of practicality, affordability, and performance

The top-spec Wildtrak which we know has the same 2.0-liter bi-turbo engine as the Ranger Raptor making the same power coupled with the same 10-speed tranny.

However, it is obviously a much more affordable buy than the Raptor. Plus, as we’ve said before, the “vanilla” Ford Ranger can do so much more than the Raptor in terms of work-related duties. Also, the Ranger Wildtrak Bi-turbo has a lot of driver-assist features. Some of which are lacking from the Raptor

>>> Check out for the latest updates in Ford Ranger Philippines price

To find out if the Ford Ranger is indeed the best truck of 2019, keep reading here on Philkotse.com.