2018 Porsche Cayenne spotted undisguised ahead of world debut in September

The exterior design of the third-gen Porsche Cayenne has been almost revealed.
In general, the 2018 Porsche Cayenne looks less bulky, actually, more streamlined with a sportier roofline and smaller windows behind the rear doors. Although the vehicle gains a wide range of considerable changes, it remains some Porsche’s familiar features found in the grille and slimmer headlights. Besides, it is said that the Cayenne may share the tail lights with the brother Panamera Sport Turismo. Many specifications haven’t been revealed, but it is likely that the new Cayenne will sit on Volkswagen’s MLB platform which underpins the Audi A7 and the Bentley Bentayga. This platform will make the car 200kg lighter than the outgoing model. 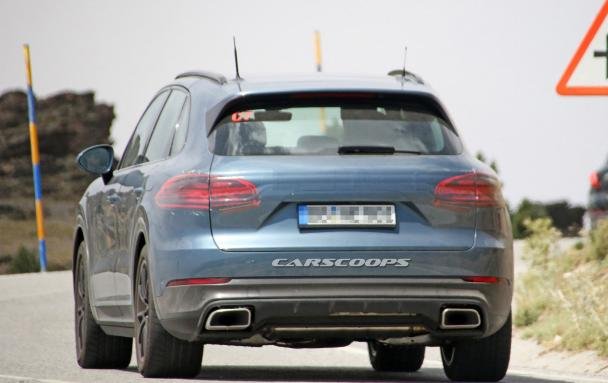 It is likely that the new Cayenne will sit on Volkswagen’s MLB platform
In terms of powertrain, Porsche said that the entry-level would use the Panamera's 3.0L 6-cylinder engine delivering 330 hp and 448 Nm of torque. Meanwhile, a twin-turbo 2.9L V6 which knocks out 440 hp and 548 Nm could drive the Cayenne S variant. The Cayenne Turbo would have a higher performance with a twin-turbo V8 producing a great output of 550 hp and 767 Nm of peak torque. And finally, the most powerful would be the Cayenne Turbo S E-Hybrid with an output up to 680 hp.

According to the production planning, the next-gen Porsche Cayenne is set to kick off in 2018. However, this crossover SUV will soon be introduced at 2017 Frankfurt Auto Show this September.

>>> Porsche is preparing for the launch of its 2018 Macan facelift at the beginning of 2018. Click here to find out more information.