Updated Aug 12, 2019 | Same topic: Handy Maintenance Tips
The car engine is what you need to be careful. In order to do this, there are 5 engine parts you need to keep a close watch on. What are they? Keep reading for more!

Owning a car comes with as many responsibilities as there are privileges; one of these responsibilities is keeping the car well-maintained. This way, you won’t have to spend on unnecessary repairs or replacements resulting from neglecting to care for your vehicle.

One of the most expensive parts of a vehicle is the engine, and it’s not unusual to get a repair bill that can potentially kill your budget when problems arise. To prevent this from happening, Philkotse.com presents some winning tips below:

1. Have your oil changed regularly

One of the most vital maintenance procedures that every vehicle owner needs to know about is changing the engine oil periodically. Neglecting this can lead to bigger problems such as reduced performance, increased fuel consumption and ultimately engine failure that can entail more costly solutions in the future.

Why do you need to change the oil in your car?

Your engine oil is responsible for lubricating the engine’s various moving parts. The oil is cold when the engine has been inactive for an extended period of time, such as when you’re parked overnight.

Letting the engine run idle for a couple of minutes after starting brings the oil to its optimum operating temperature and viscosity needed to properly lubricate the engine’s components.

When added to the engine, fresh oil has a translucent brown color. With use over time, the oil gradually turns black from the dirt and micro-particles it carries from the engine’s moving parts.

The older the oil gets, the less effective it becomes. Engine oil that’s too old will become even less efficient in lubricating the internal parts of the engine, resulting in poor performance and damage. 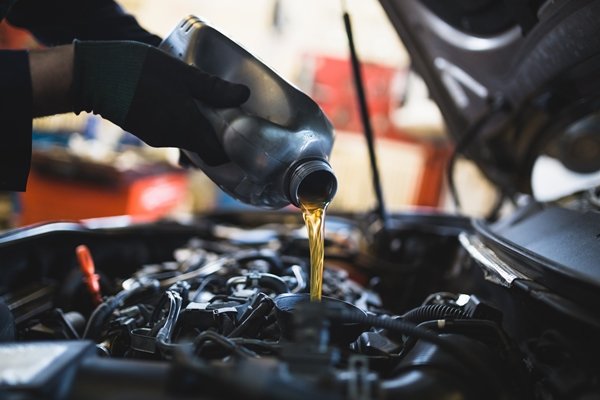 The older the oil gets, the less effective it becomes

2. Keep the cooling system in shape

The cooling system plays a similarly vital role in your car’s performance, being responsible for keeping the engine within the proper operating temperatures. Make sure that your car always has the proper amount of coolant in the radiator and reservoir.

There should be no leaks or damage that could cause your vehicle to lose coolant which leads to overheating.

What does the cooling system do?

The cooling system is mainly composed of the thermostat, the water pump, the coolant, and the radiator. The thermostat is responsible for detecting the current temperature of the engine.

Once it senses a rise in engine temperature, this will prompt the water pump to circulate the coolant that’s on stand-by in the radiator, making sure that the coolant is sent around the cylinder block to absorb the excess heat and cool it down.

The coolant then exits the cylinder block and is routed back to the radiator, where the heat is dissipated by cooling fins and the radiator fan, before being pumped back into the engine.

>>> Grasp your attention: 4 signs of a sick cooling system.

3. Make sure the engine is breathing well

With all the work your engine is doing, it needs to breathe in the right amount of clean air in combustion; this is why you need to keep the air filters clean and well-inspected. Much like how dirty lungs affect our breathing, a dirty air filter keeps the engine from properly burning the fuel during the combustion process, seriously impairing its performance.

Clean your air filters periodically, or replace them when necessary

The life expectancy of a single-use air filter for vehicles can vary largely, depending on the driving conditions that you put your car through. Although an air filter can last a very long time, you would need to check it occasionally to make sure that it’s not clogged, especially if you drive in areas that have high levels of pollution.

>>> Check out: What's a cabin air filter and when should you replace it?

This might sound intimidating to some new vehicle owners. However, checking for leaks requires only common sense and a good eye; in some cases, you can even rely on your sense of smell. Checking for leaks only requires common sense and a good eye

How does a leak happen and what causes it?

Leaks are usually caused by intense pressure and heat in the parts that either hold or transport fluids in and around the engine, resulting in damage.

It’s normal for a little water to drip under the car as a result of condensed water from the air-conditioning, but if this is accompanied by more leaks, then you might take a look at the engine bay.

Check rubber hoses and seals for signs of wear such as brittleness and cracks, since these might lead to holes where fluids such as oil, coolant and brake fluid will seep out.

There are times when it may seem inevitable to run your car while it’s low on gas, especially if you’re in a hurry. However, you may want to ditch this habit if you want to prolong the life of your car’s engine and minimize the chances of problems in the future.

>>> Must read: Which parts are most heavily affected by draining your car’s fuel tank?

When the fuel tank is low, the fuel pump works harder in bringing fuel to the engine. This increases the likelihood of sediments settling at the bottom of the tank to be pumped along with the fuel, which taxes the fuel filter and generally makes it harder for the engine to burn fuel efficiently.

Most experts advise keeping at least half a tank of fuel so that the vehicle is safe for use even in an emergency.

Where do the sediments come from?

The sediments come from the gasoline that you fill your tank with. The fuel filter separates these sediments from the actual fuel that your engine needs. While the sediments ideally remain in the filter, running low on fuel forces the engine to use every drop of fuel available in the tank, which will include the unwanted sediments.