Shoud drivers opt for it: The Pros and Cons of turbocharging & Supercharging car engines

Which is better? The turbocharger or supercharger?

If you want more horsepower the usual answer (apart from a complete engine swap) is either to turbocharge or supercharge the engine. But which is better in terms of performance and long-term maintenance?

Car makers design stock car engines to run fine as they are, or at least within their intended design limits. But people will always want more performance out of their engines, usually by increasing the volume of air that goes into the combustion process, causing it to burn more fuel and consequently do more work.

>>> Check out this post if you are planning to tune up your car: Car tuning for improved performance: Yay or Nay?

Two ways of increasing the power output would be turbocharging and supercharging car engines a favorite pastime among tuners.

Time was when increased engine performance depended on size (remember the phrase “No replacement for displacement”?). Fortunately, gearheads have found the means to squeeze out even more power from a stock engine without resorting to a bigger powerplant.

In contrast to natural aspiration wherein the car’s forward motion draws air into the engine bay to aid in combustion, both turbocharging and supercharging car engines use forced induction or the process of bringing in compressed air into the engine’s air intake.

>>> Related: What does naturally-aspirated mean? Pros and Cons?

I. How supercharging and turbocharging works? Every revolution of the crankshaft draws in more air to ignite the fuel in the combustion process. Superchargers can run up to 50,000RPM and deliver up to 46% more horsepower, being especially effective in high-altitude environments where the air is thinner.

Turbochargers are mini-windmills that use waste exhaust gases to deliver power to the engine, with the gases running through a turbine that powers the compressor itself. Size is a factor in a turbocharger’s efficiency, with smaller ones typically being able to deliver more boost in a shorter amount of time. Since turbochargers are not directly linked to the engine, they can spin at much faster rates, around 150,000RPM, but this also makes them susceptible to turbo lag, or a temporary delay between throttle input and the resulting power output. Like superchargers, turbochargers do well in high-altitude settings.

>>> Read to have a deep understanding of turbocharger and supercharger: how are they different?

II. The pros and cons of turbocharging

The stock engine’s horsepower is increased significantly with turbocharging.

Small engines can now yield a power output comparable to much larger engines.

Fuel economy is better with less fuel used when the engine is idling.

Maximized use of excess exhaust gases from fuel burned

Turbochargers “recapture” exhaust gases and repurpose them to drive the engine faster, making good use of the excess energy produced from the fuel and air combustion. 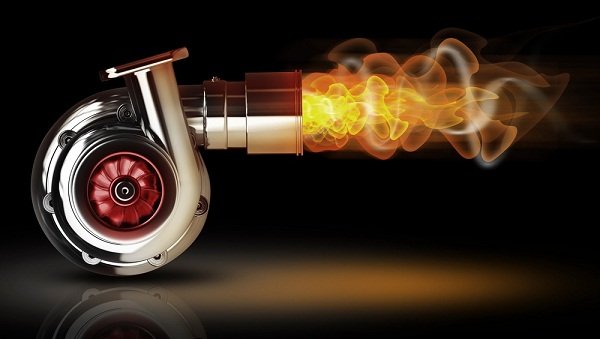 The turbo can be described as an air compressor

In the course of boosting power, turbochargers take time to spool up the turbine using exhaust gases, which means the increased power delivery is delayed.

Turbocharging has an operating threshold

Traditional turbochargers have boost limits for low RPM ranges when the exhaust gases are enough to ignite extra boosting for the engine.

With a turbocharger’s abrupt spinning effect that causes friction loss, power surges can be considerably unstable

Turbochargers get real hot and burn through oil as a result. This entails modifying the engine to be able to hold the extra oil necessary; without it, the oil will dry up faster than usual.

III. Is supercharging better, then?

Slap on a supercharger, for a quick and easy way on increasing engine power output. They’re also cheaper to bolt on, with some tuners considering this option first.

Power and thrust is instantaneous because of the connected crankshaft

Power is immediately produced by the crankshaft, so there is no turbo lag.

Better at lower RPMs that turbochargers

Superchargers are better at producing a boost in low RPMs compared to turbo charges.

Not as efficient as turbochargers

The extra heat causes wear tear on the engine

Superchargers place a direct mechanical load on the engine, contributing extra heat that accelerates the engine’s wear and tears. Dangerous heat can cause the engine's wear and tear

IV. Possible issues that can come up when supercharging or turbocharging car engine

Gearheads who are into turbo and supercharging car engines will always have either of these options to choose from. The improved performance doesn’t come cheap, but for many owners, the satisfaction is well worth the price.