Jan 07, 2020 | Same topic: Highlights of the week
The Honda City CLUB GD ARIA is a fun-loving group of like-minded individuals who share their love for the mid-2000s Honda City.

The heart wants what it wants

What was your first-ever dream car? Some might say they had the hots for a Ferrari or a Lamborghini; you know, the staple fare of every boy or girl’s room poster or phone wallpaper.

And why wouldn’t those cars be? They were meant to be objects of pure desire, a marriage of both art and precision engineering. Mine was quite different, though. As a high school kid, I’ve always had my eye on the second-generation (in the Philippines, at least) Honda City. I’ve covered this in a previous article where we featured a modified JDM-inspired Honda City; it had all the curves in just the right places for me, and it was chock-full of all-new technology that wasn’t found in any other car at the time. That City was truly a car ahead of its time, and it may be both a boon and a bane, which we’ll be discussing later. Over the Christmas break, I was pleasantly surprised and honored to have been invited to one of the most prominent car groups in Manila, the Club GD Aria group. This gathering is built around the love and passion for the second-gen Honda City with the GD chassis designation.

The car has merited split reactions among car fans because of its looks that were ahead of its time, but personally I felt that it ushered in a new era of the design language in the Philippines. It had incredible space inside and introduced us to the wonders of Honda’s Utility Long and Tall seating configuration, as well as its advanced Continuously Variable Transmission. The bright lights of BGC blended well with the Honda City

Way ahead of its time

The Gen 2 City was sold from 2003 to 2008, undergoing a mid-cycle refresh in 2005 in what was probably a response to design critics who compared it to a certain marine mammal. People will always have something to say about a car’s looks, but I loved both that design and the refresh, and this group of individuals have banded together to show just that. You really cannot dictate what the heart wants, and my heart wants this

>>> Check out for the latest updates in the Honda City price

I initially had my doubts if I was even going to the event, as it was right smack in the middle of the holiday season traffic rush, where you can never really escape the clutches of Carmageddon. But something told me I would regret passing up the opportunity to see this car again up close, and that it would be worth it. Boy, was I right. 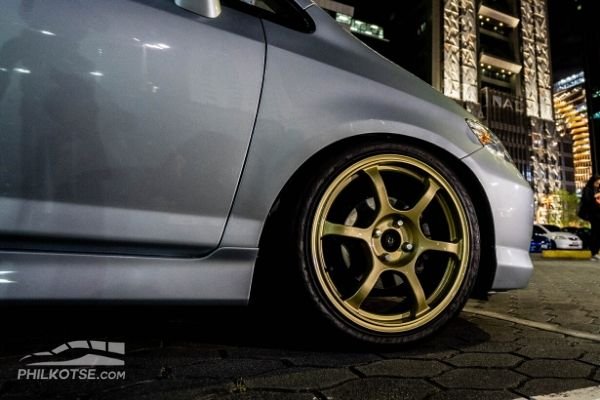 I personally cannot find a bad angle to shoot this in

The Club GD Aria Group was established long before the rise of Facebook. If anyone could remember the classic online automotive forums where you have to register yourself before you can actually post and read the threads, then you’ll know what I’m talking about.

The club was formed pretty much by like-minded individuals who wanted to show their passion for the Gen 2 Honda City. You share not just the camaraderie among your brethren but your experiences with the car, and it’s also an opportunity to ask for advice on how one works out the unique quirks of your own vehicle. Fun and funky before it was cool

We met at one of the club’s favorite hangouts in BGC, but not before I had to slog through even heavier traffic, no thanks to a certain annual film festival parade, but I soldiered on. And I was not disappointed.

Thankfully, the group was having their dinner nearby, so I was able to chat with them and share my thoughts on the Honda City. As it turns out, everything that I said about the Honda City rang true with most of the members. The club promotes “Legit Respect” for all

They loved the car because of its fun and funky design, that it was virtually different from anything else out there. More importantly, nothing can even compare to the amount of room and interior versatility offered by the Honda City.

Mind you, the Honda City isn’t the only one that has a GD chassis, as you can check out the Honda Jazz GD here! Seriously, it's difficult to take a bad picture with the Honda City

After dinner, the guys shared some items to give away among themselves, and although I drive a different model, never did I ever feel left out of their generosity. The genuine bond between the members was palpable, and this is reflected on the fun times they have and the energy they exuded despite the long day. If you have a Honda City GD of your own and want to join their fun and breezy group, head on over to the Club GD ARIA official Facebook page and hook yourself up! If you want us to feature your car group, please drop us a comment down below or send me an email at leroy.robles@philkotse.com.