We take a look at the virtues and vices of the 9 cheapest cars in the Philippines in 2022.

In the previous post, we have listed 6 cheapest brand new cars in the Philippines in 2022, namely the Geely LC GB, Suzuki Alto 800, Hyundai Eon GL and Lifan 520 1.3 DX. In this article, Philkotse.com will reveal the remaining names of the most affordable vehicles on the market.

Let’s take a look at the pros and cons of the 9 most budget-friendly wheels in the country.

The Toyota Wigo made quite an impression when it was launched, thanks largely to its small size yet big interior, with an economical powerplant under the hood. In terms of design, Toyota hasn’t been resting on their laurels, updating the Wigo with sharper front and back ends (now with projector headlights and side mirror lamps) that give it a more mature aesthetic, as well as equipping the engine with variable valve timing to improve efficiency.

In 2020, the new Wigo is priced at P557k, making it one of the best deals for cheap cars for sale in the Philippines. 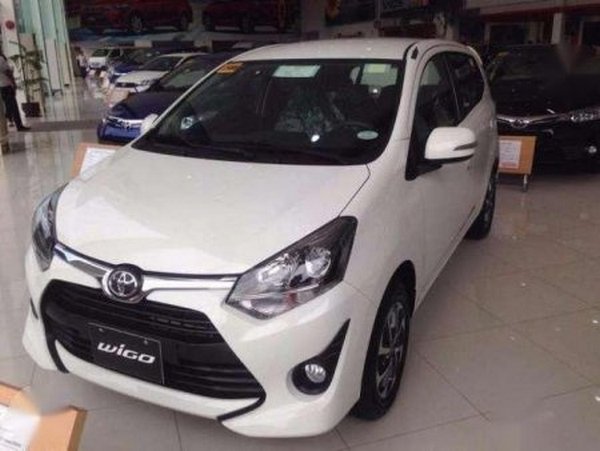 The Toyota Wigo now looks sharper than ever

The cabin sports a different airconditioning control system, but one that does away with the vent selector switch, which is a bit of a step backward. Fit and finish also take a hit, with sharp edges on the dashboard left over from the injection molding process bound to make some passengers uncomfortable, as well as vulnerable to scratches and cuts.

The base variant comes with a 1-DIN radio receiver with USB and auxiliary connectivity. Five people can still fit comfortably inside, although the driver’s seat can be a bit of a challenge for some. There’s no assist grip to aid in ingress and egress, and you’ll have to spend separately for an anti-theft system as well as wireless door locks.

The new Toyota Wigo is a macho mini hatchback

Under the hood, the new 3-cylinder 1.0L engine with 66 PS, 89 Nm of torque, and variable valve timing makes its biggest mark on fuel economy (by way of example, the automatic variant managed 9-11 km/l in city driving, and up to 25km/l on the highway).

There’s a quieter ride thanks to newer tires, which also seem to improve grip and overall confidence on the road. Even with certain features lacking over the upper-spec variants, the Wigo E still has the Toyota badge going for it, which is commonly associated with a reputation for solid reliability.

The Mirage’s youthful looks belie its age (it’s already gone through six generations), yet it still is going as strong as when it took the Philippine automotive industry by storm some six years ago. From its rounded proportions, light weight and economical 3-cylinder engine, the Mirage was purposefully designed for efficiency. With a price tag of P570k, this hatchback is definitely one of the cheapest cars in the Philippines in 2022. A more mature look for the Mitsubishi Mirage

The cute-as-a-bug front fascia on the first release eventually gave way to a facelift that entailed a larger grille and projector-style headlamps with LED running lights. The rear end was also updated with LED tail lights. Steel wheels and hubcaps were replaced with alloys, which further improved the look.

The car features a generous cabin space. And its tech features make driving it a total joy. The Mitsubishi Mirage comes with improved safety features and a GPS navigation system, including the Radar Sensing Misacceleration Mitigation System-forward.

Inside, even the base GLX M/T now gets a 2-DIN 7-in. touchscreen which incorporates a DVD player, USB/iPod connectivity as well as auxiliary input, previously available only on the upper-tier GLS. Gauges are now lighted in color for better visibility during night driving.

The same narrow seats are still employed, however, and are of little help as the Mirage produces considerable body roll in corners. Noise, vibration and harshness (NVH) levels still leave something to be desired. In line with the thrust towards efficiency, the pedals are still soft, with an unforgiving clutch.

The Mitsubishi Mirage uses the same 3-cylinder 1.2L MIVEC engine kicking out 78 PS and 100 Nm of torque, although it has been upgraded to Euro 4 emissions compliance. Interior headroom and legroom remain, as well as cargo capacity behind the rear seats.

Filipinos have an impression of Honda as having pricey cars, something that the Japanese automotive manufacturer might have wanted to correct when it introduced the Honda Brio hatchback and Brio Amaze subcompact sedan.

The Brio’s wide flanks complement its small proportions; it may be cute, but don’t mistake it for a pushover. Sharp creases along the profile help define the silhouette even more, with subtle curves complementing it in places. The smallish grille is flanked by leaf-shaped headlights, while the glass rear hatch lends a bit of sophistication. 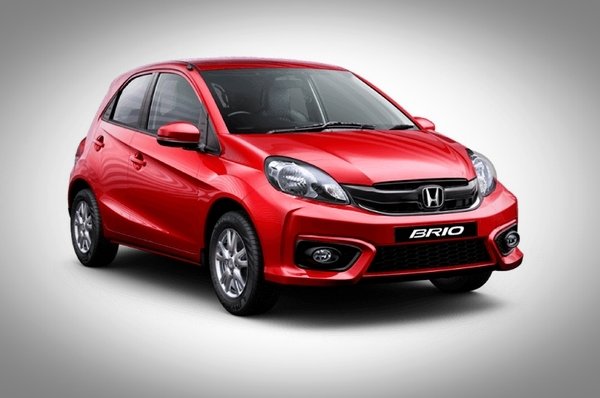 With the Brio, Honda joined the subcompact battle

The interior is as welcoming and utilitarian as it is quirky, with cupholders and door pockets in abundance. A 2-DIN head unit with USB and auxiliary port takes care of entertainment duties. Honda is well-known for their versatile ULT seats that seem to magically increase interior space, but on the Brio, the rear seats feel somewhat cramped in terms of legroom. Rear cargo room is so-so, but luckily the fold-down rear bench compensates for that.

Under the hood, the 4-cylinder 1.3L i-VTEC engine is probably tops in its class for acceleration, thanks to 100 PS and 127 Nm of pull. As with other contenders in its class, the Brio offers airbags, ABS, EBD, seatbelts and a reinforced body as standard safety features. For deeper understanding of this hatchback, read our Honda Brio Philippines review.

Can be had at P631k, the affordable city car from Honda also makes it to the list of low down payment cars in the Philippines.

Another model in this list of cheapest brand new cars currently marketed in the Philippines is the Kia Picanto.

Kia’s subcompact contender is now on its third generation, and it seems to have gotten the Benjamin Button syndrome; the older it gets, the more youthful it tends to look. The design is especially very European, and can be attributed to the influence of Kia’s President and Chief Designer Peter Schreyer.

Outwardly, the Kia Picanto looks more aggressive than before, with projector headlights flanking the trademark tiger nose grille that seem to glare at the road ahead, perched on top of a huge air intake along the front bumper. The rear looks sharper too, with show-stopping C-shaped taillights. 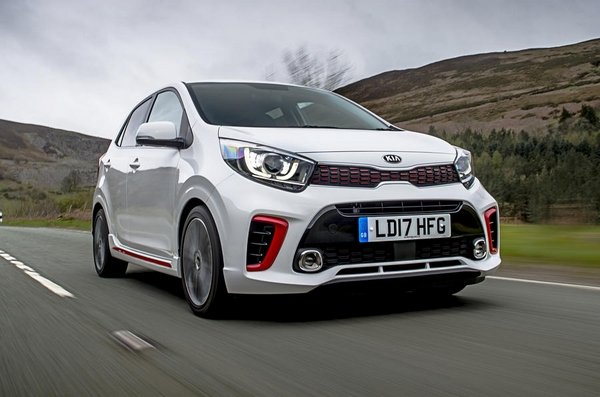 Apart from being more spacious, the new interior now sports a new layout, materials and improved levels of comfort. Redesigned seats for both front and rear passengers work towards this end. Lower step-in height allows for easier ingress and egress, yet there is also increased headroom and legroom, although three adults out back is a bit of a tight squeeze.

Default cargo carrying capacity is at 255 liters, expandable to 1,010 liters with the rear seats folded. An AM/FM radio head unit with auxiliary input and USB connectivity is standard, pumping out the tunes via four speakers throughout the cabin.

A 3-cylinder, 1.0L engine propels the Picanto SL on the road, churning out 67 hp and 97 Nm of torque, with power shifted to the front wheels by a five-speed manual transmission. The suspension tweaks make the Picanto SL stable and unperturbed except for the most unsettling bumps.

The electric steering makes the car maneuverable thanks to its 4.7m turning radius, although it can feel slightly off-center at times. The Picanto SL can feel self-assured on the road, although it only offers a handful of safety features like driver’s airbag, immobilizer, security alarm and door locks.

The Chevrolet Spark now comes bigger, but is it necessarily better? This third-generation subcompact now packs more features in a redesigned package that’s hard to ignore in the metal. A fresh design, cheap price tag and also, monthly instalment of P11,862 make the Chevrolet Spark a top pick for those who’re seeking low monthly payment cars in the Philippines 2022.

For starters, the Chevrolet Spark does away with the awkward front and rear ends, replacing them with smoother lines that give the car a chiselled look. The badge now sits in its rightful place on the dual-port grille, flanked by more assertive headlights. The large greenhouse provides superb visibility all around. No more awkward front and rear ends for the Chevrolet Spark

Inside the cabin, you’d do best to manage your expectations compared to some of the other offerings in this class. Interior is somewhat cramped, but not necessarily uncomfortable; some of the larger passengers just might end up rubbing elbows with each other, is all. Four passengers are the most ideal when taking the Spark out for a ride.

The subcompact offers 195L of luggage space with the 60/40 split-fold seats collapsed. Drivers can grab hold of the sporty three-spoke steering wheel similar to the one on the Trax. A 7-in. touchscreen interface dominates the center stack, featuring MyLink infotainment functions such as multimedia, hands-free calling and smartphone mirroring.

Powering the Spark LT is a 1.4L DOHC inline-4 engine that’s good for 99 PS and 128 Nm of torque. The suspension, while firm, tends to exhibit harshness at low speed imperfections. Antilock brakes have plenty of bite, sending the Spark’s relatively heavy 1,049 kgs. to a quick stop.

The Spark LT enjoys most of the safety features offered across the range, such as dual airbags, anti-theft alarm, central door locks, engine immobilizer and ISOFIX child restraint tethers; the only thing it lacks as a base model is traction control.

If you are on the market to look for cheapest cars in the Philippines, our following posts can be some help: