White lines on the road: What makes them different from Yellow lines

The difference is easier to remember than you thought.

Lines are almost everywhere on the road. These lines function as a guide for drivers especially for those who are not familiar with the place as there could be dangers ahead.

Whether in the city or province, these lines or markings on the road are present. They keep the flow of traffic as smooth as possible to avoid congestions, as well as to form a unity in for all drivers in a specific road condition.

The first solid line painted in white on the road was first instituted in 1918 in the United Kingdom. Eight years later, these lines or markings are now considered as a standard road safety regulation. It wasn’t until the 1950s when yellow lines on the road were used. And in 1956, dashed or broken lines were added to the roads.

The idea of placing solid white lines on road came from a guy named Edward Hines after seeing a milk truck leaking milk as it passed by. In 1972, the man was inducted into the Michigan Transportation Hall of Honor for his bright idea.

As said earlier, these lines are now everywhere and are a standard for all roads. For this reason, let’s discuss the two road marking colors we can always see on the road, the white and yellow, so we can be one step closer to become a better driver.

In the Philippines, roads are relatively narrow, especially in Metro Manila. This is why traffic is very rampant in the area. You can see traffic enforcers almost everywhere especially during rush hours.

This is why many Filipino drivers need to understand not only traffic signs but also road markings. Also, knowing the meaning behind the road markings can reduce the risk of you getting into an accident. Broken lines indicate that you can pass anytime with caution

In other words, yellow lines indicate that you are in a risk of colliding with a vehicle opposite of your direction if you pass these lines.

The colored road markings come in different forms. The first one is broken or dashed lines. These types of road markings state that you can switch lanes but do it with extra caution. However, you must be more careful with yellow broken lines as you will be driving through a traffic flow opposite your direction.

The second type of road marking is solid lines. Solid lines indicate that you must stay in your lane and they also mark the shoulder of the roadway. You can mostly see both solid white lines and solid yellow lines on roads with a curve. Broken yellow lines are one of the rarest markings to spot

However, solid lines take exception. You may pass both solid white lines and solid yellow lines if and only if you are to turn into a parking spot. You can also pass through solid lines with extra caution – more than those as compared with broken lines.

If you see double solid white lines on road, then those don’t take any exception at all. You can never pass double solid lines at all times.

On some roads, you will see that broken lines tend to get shorter and shorter as you drive along. This indicates that you should stay in your lane as the road can either have solid white lines, or yellow depending on the road, or be at the end of the road. 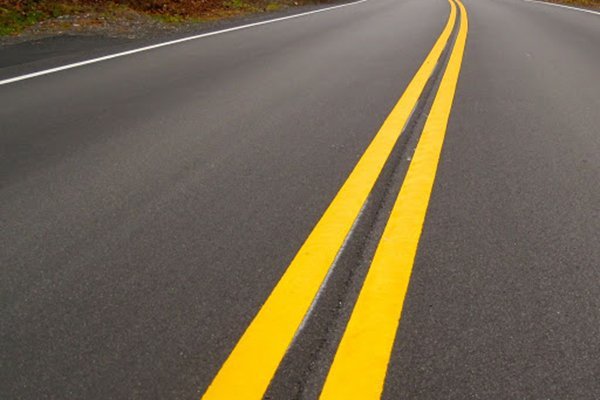 Now, these road markings differ in some countries. In the Philippines, we have a bit of both European and American style of road markings. Although they’re not much different from each other, it still pays to know for your next out of the country trips.

If you happen to visit Metro Manila, you would have probably seen blue lines, particularly in EDSA and C5 roads. These blue lines indicate to the road or lane is preferably for motorcycles. However, cars and other vehicles can still use the blue lane given the fact that it has broken lines.

3. Solid white lines on road: What are the penalties?

Of note, you have to keep in mind that swerving is not a traffic violation per se as for Metropolitan Manila Development Authority (MMDA). However, you can be accounted for reckless driving for actually swerving ridiculously through lanes. Since solid double yellow lines indicate that you shouldn’t switch lanes as there could be opposite traffic ahead, we can also say that the traffic violation ‘illegal counterflow’ can be a penalty. For the first offense, you will be fined as much as Php 2,000 and a suspension of driver’s license.

>>> Related: 7 Most Expensive Fines for Traffic Violations in the Philippines (MMDA)

Q: What is the solid white line meaning?

Solid white line on road indicates that the traffic is traveling the same way as your direction.

Q: What does the yellow line mean?

It indicates that the traffic is traveling the opposite way of your direction.

Q: What is the penalty in the Philippines for disregarding road markings?

There is no official penalty for disregarding both white and yellow lines. However, you could be accounted for reckless driving or illegal counterflow.

Q: What does a double solid line mean?

Double solid line states that you shouldn’t pass it as a danger is very likely.

Q: What does the broken line mean?

It indicates that you can switch lanes anytime with caution.