Everything you need to know about Hill Descent Control system

Updated Nov 13, 2019 | Same topic: Let's Drive Smart!
Understanding what Hill Descent Control Systems are and how it can help drivers, how to use it and how it works.

More than being efficient and convenient solutions, many futuristic innovations are intended to enhance safety. One of these innovative features is the Hill Descent Control System. This particular “system” may sound all new to some vehicle owners. But it’s actually been around for quite some time now.

In fact, not a lot of people are familiar with this system and what it’s capable of. But what is this Hill Descent Control Systems? Where did it come from? How does it work? How will it help us? What vehicles have it? Get all the must-know info in this article from Philkotse.com!

1. What is this Hill Descent Control system?

The innovative feature was first created to help drivers who ride on rough terrain often. But now, you can also use it on almost any hill where you want to descend at a slower pace. Unlike what most people think, this system is unlike cruise control. Cruise control is designed to work when you’re driving above a particular speed.

Hill descent control, on the other hand, works when the vehicle is riding less than 20 or 15 miles per hour. The actual specifics can vary from one vehicle manufacturer to another. But in general, the Hill Descent Control System is a technology that activates at low speeds.

2. How does this Hill Descent Control system work?

This system requires works in multiple steps. Here, we made a shorter and simpler way for you to understand these processes. Hill Descent Control System is similar to the other safety features taking the automotive industry by storm. One can even say that it’s part of the advanced driver assistance systems. Hill Descent Control basically makes a task easier where a driver would originally have done it manually.

As we discussed earlier, the particular task is to slow down a vehicle during downslope. In the past, there are cases where vehicles lost traction while going down steep roads. The chance of this happening is lessened by using Hill Descent Control. 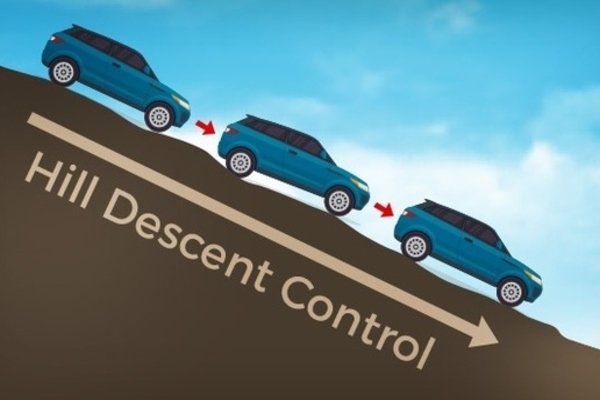 The particular task is to slow down a vehicle during downslope

Similar to those two systems, the HDC can tap into the Anti-lock Braking System (ABS) hardware. This will then pulse the brakes without requiring any effort from the driver. Each of the four wheels can be independently controlled this way. This feature is key to having and maintaining traction on the road. This allows the Hill Descent Control to lock up or release the brakes from individual wheels. The system will be able to tell when doing so will be necessary.

4. How can I use the Hill Descent control in my car?

There are OEMs that offer Hill Descent Control Systems in the market. The only difference is that each can be operated a little differently from the others. One characteristic that is present in almost all systems is the requirement for low speed. These types of systems are created to maintain the speed of the vehicle. Note that it’s not made to reduce a fast speed to a slow and safe one.

A lot of the vehicles manufactured require your speed to be less than 20 mph. If your speed is above this, the Hill Descent Control won’t work. But there are still exceptions to this. One example is the Nissan Frontier. In this vehicle, the speed threshold can change according to the gear set. A vehicle equipped with Hill Descent Control requires to be in reverse or forward gear. It should never be neutral. Remember that it should also be on the grade right before the hill descent. That’s the only time most vehicles with Hill Descent Control can activate the system. A lot of HDC-equipped vehicles out there have some type of light-up indicator. This is usually shown in the dash. This icon will light up to tell you that all conditions are met, so you activate the HDC.