Volkswagen finally jumps into the small crossover segment in a big way by unveiling the T-Roc.

Keep in mind, the T-Roc made its debut at the 2014 Geneva Motor Show, taking pride of its handsome appearance and inspired performance. At that time, it originally had a 3-door body style and got a crossover-like look. The automaker was starting to take a close interest to this model. The model looked very beautiful yet in some ways not really practical.

>>> This Volkswagen’s baby SUV is speculated to premiere at 2017 IAA in September. Read our article for more information. 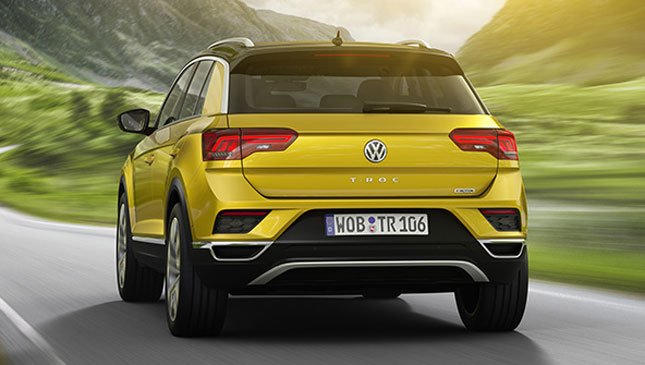 The newest stunner has been a long time coming and will be very attractive even in a 5-door form. Prior to this, the German automaker has owned only the Tiguan in the segment, whereas many of its main competitors have made many additions to their model ranges. The T-Roc is said to be a very stylish model. Up front it comes with a big grille with headlights.

LED daytime running lights are fitted as standard in the front bumper. Prominent wheel arches add style to the appearance – something of ruggedness. Chrome trim makes the T-Roc look brighter. A roof-mounted spoiler and slim LED taillights add some sporty style to the car’s profile.

>>> 2018 Volkswagen Tiguan is speculated to arrive at US dealerships this summer with updated version of the 2.0-litre TSI engine. Read full our article to find out more details. The T-Roc’s inside space can be truly high-tech room. For example, a newly developed infotainment screen is set to take the place of the traditional one. Other amenities include a digital instrument display, and 445L – 1,290L spacious luggage space.

The T-Roc is powered by 3 TDI oil-burners and 3 gasoline TSI engines. The most powerful engine can deliver an output of a whopping 188hp. Two transmissions are available: a 7-speed dual clutch DSG or a manual transmission. This cool CUV is fetching around P1.2 million.